Buy a good, comfortable, sturdy chair now rather than later

An Aeron would have been a pretty big expense for me fifteen years ago when I bought my first office chair. Just a few years later, though, and the price wouldn’t have been too big of a big deal. I should have bought one a decade ago. I’d have been sitting more comfortably the entire time, and in the long run it would have been less expensive than buying a new, cheap chair every few years.

Not everyone finds the Aeron to be a comfortable chair. Fortunately there are plenty of other good chairs to choose from. I’d definitely recommend spending some time sitting in them before you buy one, though.

My Progression of Chairs

At some point when I was in school, probably shortly before starting high school, my parents bought me a wooden office chair like this one. I remember them saying they got it at a yard sale for five or ten bucks. I would guess that I started sitting in that chair sometime around 1990, and I continued to sit in that chair through most of high school. I don’t remember it being uncomfortable, but very little is uncomfortable when you’re still under 140 pounds.

At some point that chair finally broke, and I upgraded to another wooden office chair, like this one. This one once belonged to my grandfather, and it is still at my parents’ house today.

I replaced it with a random, cushioned, high back executive style chair at some point after I got out of high school, most likely sometime around 1997. Over the next decade or so I bet I bought a half dozen of these chairs, each for between $150 and $250. They weren’t well made, and I often left them behind or gave them away when I moved. 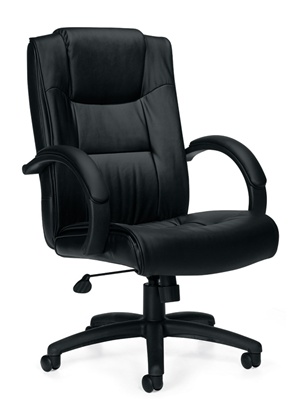 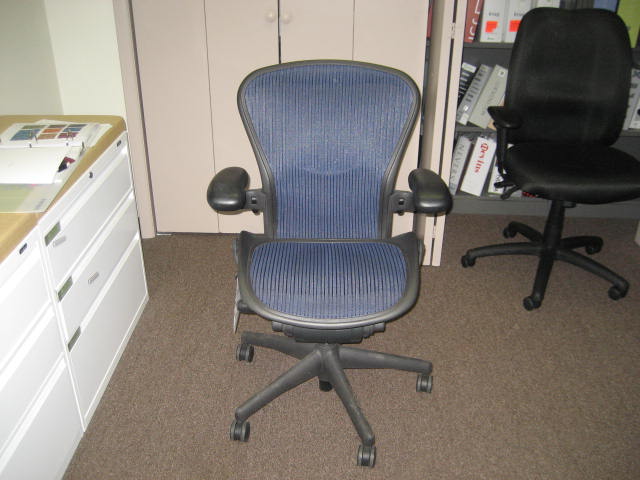 The story of my Aeron Chairs

I finally convinced myself to buy an Aeron chair in the latter part of 2009. I ordered a used “Cobalt Classic,” fully adjustable model through a vendor on eBay for around $450 shipped. The chair was in pretty good shape, and the label said it was manufactured in 1997. The sides where the arms meet the chair were pretty scuffed up, presumably from twelve years of adjusting, and it was a bit squeaky when leaning back.

About a year later, my father had a heart attack. I knew I’d be spending some time up there, so I drove the 900 miles up to my parents’ house with the Aeron in the back seat. I was up there for about two months, and in that time we ended up ordering another Aeron for my father, and I left my “Cobalt Blue” Aeron behind for my mother.

Shortly before I left to return home I found another chair on eBay for myself. This one had the more common “Carbon Classic” color scheme, which is a black chair with a dark gray weave in the pellicle. This one was “new”; I believe it was some sort of floor model or something, fully adjustable, and has the newer levered locking mechanisms on the arms.

I have been visiting my parents again for the last six weeks or so, this time for back surgery. I am in my old bedroom, at my 20-year-old desk, sitting in that same “Cobalt Blue” Aeron chair. I’m not exactly sure why, but it no longer has a squeak when I lean back.

I still miss the blue chair a bit. It was a very nice-looking chair; the “Carbon Classic” is pretty boring in comparison. I’m pretty certain it is the same color as Sheldon Cooper’s Aeron chair.

Why the Aeron chair? Aren’t there better chairs now?

I’m certain there are better chairs available now. I can’t say I’ve ever sat in any of them, though. The major selling point of the Aeron was the fact that I’d spent some time sitting in one in the past and I already knew I liked it. After that, the price and build quality of a used Aeron made a lot of sense.

My “Carbon Classic” Aeron chair has been in my possession now for almost four years. It looks and feels exactly the same as it did when I first got it. I expect to be able to say the same thing ten years from now.

Some people dislike the Aeron’s pellicle seat. More specifically, they don’t like the hard edge at the end of the seat. Some people say it cuts off the circulation in their legs. I’m a pretty heavy guy, and this has never been a problem for me. In fact, I don’t think I’ll ever buy an office chair with a cushion again.

The breathable pellicle seat is more comfortable on warmer days, and it even helps prevent swamp ass: