I’ve been using wireless mice for most of the last ten years. During most of the time, I used my old Logitech MX900 Bluetooth mouse. The MX900 was a very power-hungry mouse; I had to make sure to put it in the dock every night, or else I had to swap the batteries every few days. Being power hungry was what made him suitable enough for playing first-person shooters.

I tried other wireless mice before buying the MX900, but they liked to take short naps fairly often. If I was playing a game, and waiting around a corner to ambush someone, the mouse might be asleep and cost me valuable seconds. The MX900 didn’t have that problem, so I was willing to put up with the need to keep a couple sets of Eneloop batteries around.

By the time I replaced my laptop with a new desktop machine, the MX900 was really starting to feel old. The battery door was busted, the skates were starting to fall off, and an 800 DPI mouse starts to seem less smooth when gaming at 2560x1440 at 120 Hz. I figured it was time for an upgrade, so I picked out a random, inexpensive 1600 DPI wired mouse.

It was a fine mouse, but I had forgotten how annoying it is having a wire. If you just drop the wire behind your desk, gravity sometimes pulls at your mouse. If you drop it down the desk’s grommet, you’re sometimes fighting against the cable. In the end, I decided to velcro the mouse cable to my monitor stand. It worked well enough, but every so often I would run out of cable. I have a very smooth desk, and I don’t use a mousepad. With a wireless mouse, I can circle strafe in the same direction for a long time before running out of surface. Running out of cable was a different matter.

My friend Brian bought a fancy wireless mouse recently, and I was immediately jealous. I wanted a wireless mouse again, but the mouse he chose has one of the same failings as my old Logitech MX900: the batteries only last a couple of days. That was something I didn’t want to go back to, so I started doing some research.

The mouse I kept coming back to during my research was the E-Blue Mazer II wireless gaming mouse. It seems to be modeled to imitate the look of several of the mice that Razer makes, but it is sold for a fraction of the price. This alone was a bit worrisome, but optical mice are made from simple components that were already inexpensive a decade ago. There’s absolutely no reason that you can’t sell a quality wireless mouse today for $25, so I wasn’t going to use this as an excuse to cross this mouse off my list. 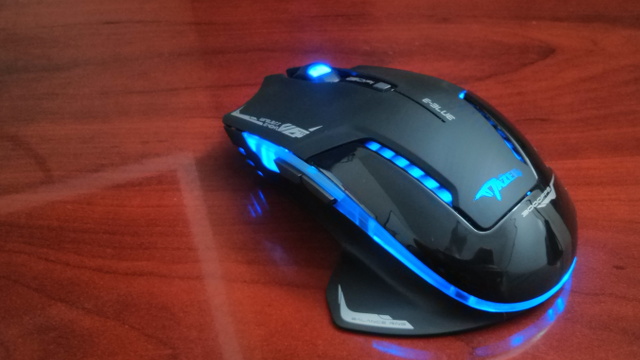 The specifications and reviews led me to believe that the E-Blue Mazer II would fit all of my requirements. It is wireless, it can be set as high as 2500 DPI, and several reviews claimed that a single set of AA batteries would last from several months to almost an entire year.

I couldn’t see any reason not to pull the trigger on a mouse that costs less than $25. I opted to pay an entire extra dollar for the version that lights up. I don’t ever plan to use the lights, but I thought they’d make for better photographs!

The E-Blue Mazer II comes in impressive packaging for a sub-$25 mouse. It comes in a solid, reusable plastic case. It is the sort of case that I would store a handful of Arduinos and related electronics components inside. When you open the box, you’ll see the mouse, AA batteries, and wireless USB dongle staring back at you. It is much nicer than the usual blister pack most inexpensive mice are packaged in. 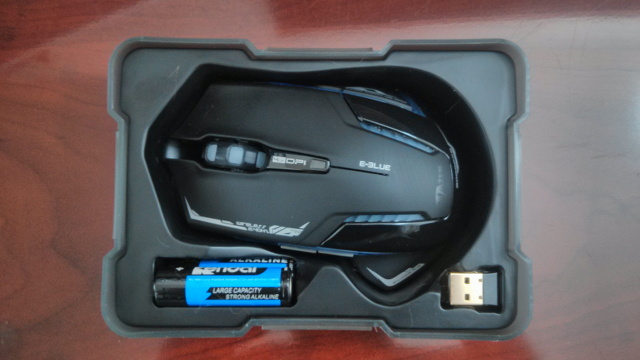 There were a lot of reviews complaining that the E-Blue Mazer II is too large. I was happy to hear this, because I have fairly large hands. The one fact that I don’t recall reading is how short this mouse is. I bet it is nearly ¼” shorter than the average mouse. This was weird for the first few minutes, but I soon stopped noticing.

The range on the wireless dongle isn’t the best. I had the dongle directly into my desktop computer at first, and my computer is on the floor next to the desk. The mouse seemed to work fine at first, but then I picked it up and moved it. Whenever I did that, the mouse pointer would jump to the upper left corner of my screen. Relocating the dongle completely solved this problem for me.

This isn’t too surprising to me. My desk is made of heavy, thick MDF. I’ve had problems with various Bluetooth devices in the past. I just assume that 2.4 GHz doesn’t penetrate it very well.

Don’t forget to unwrap the skates

The mouse worked just fine out of the box, and I used it for almost two weeks before I noticed something very important. There is a thin layer of protective plastic over the mouse’s Teflon feet. The plastic was smooth enough that the E-Blue Mazer could slide across my desk just as nicely as any other mouse I’ve owned.

When the Teflon skates make contact with the desk, though, the mouse slides around with significantly less effort. So don’t forget to peel off those thin protective stickers!

One month of daily use

I have very little to complain about so far. I’ve probably played two dozen hours of Team Fortress 2, and the mouse has been working admirably. The mouse is comfortable, the buttons only require a soft touch to activate, and the weight is quite nice. Most of the weight is in the AA batteries, and they’re very low and directly below my knuckles. That’s probably about as close as a mouse can get to being “mid-engine.”

I’m still using the generic batteries that came with the mouse, and they’re still going strong. I popped one out and tested it with my multimeter, and it is still reading a little higher than 1.5 volts. The E-Blue Mazer II stays completely awake while you are using it, but it shuts itself off if you don’t touch it for about five minutes. After it shuts down, you have to hit a button to turn it back on.

This was annoying at first, but I realize this is how you make the batteries last several months. I’d much rather have to click my mouse when I sit down than have to swap batteries every few days. The mouse rarely falls asleep while I’m working, but I do occasionally spend more than five minutes writing without ever touching the mouse.

I would definitely buy the E-Blue Mazer II again. In fact, I plan to order a second one to keep in my laptop bag since they are so inexpensive. The second mouse will most likely be the model that doesn’t light up

I will come back to this blog post when I have to replace the generic alkaline batteries with a set of Eneloops, but I don’t expect that to be any time soon.

Do you have a wireless gaming mouse? I’d love to hear what you think of your gaming mouse, or even your E-Blue Mazer II. Please feel free to leave a comment!