One of my friends recently upgraded his desktop computer, and he very nearly dragged me along with him. I was very close to joining him with a similar upgrade, but the performance increase just wasn’t going to be big enough. I was starting to feel like I was missing out on the fun, so I investigated the possibility of upgrading my laptop from 8 GB to 16 GB of RAM. 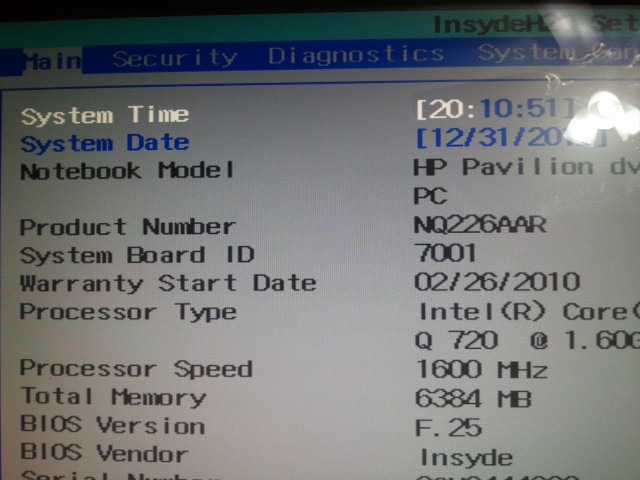 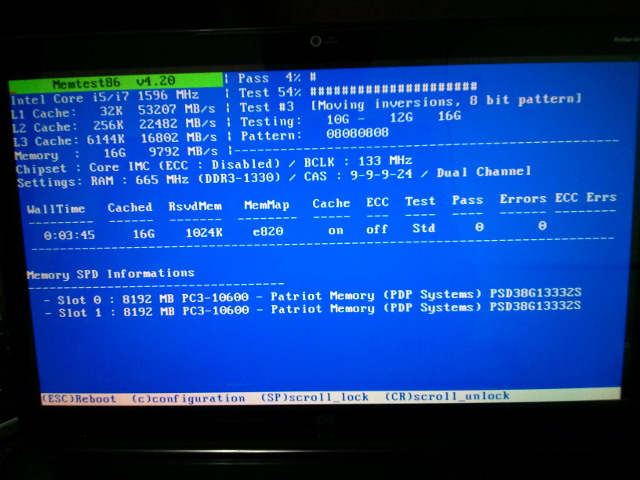 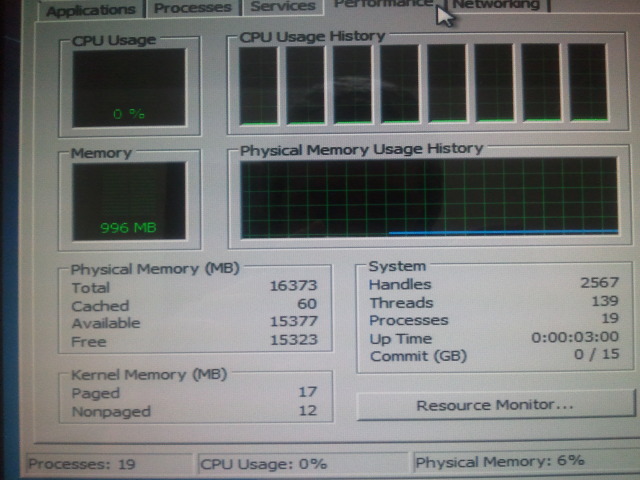 I didn’t find any information that I thought was terribly definitive. I found this forum post saying that his DV8T may or may not be working properly and that his BIOS only saw 6 GB of RAM after the upgrade. There are other similar laptops with Intel 720QM processors that ship from the factory with 16 GB, so I figured there is a good enough chance that it would work in mine as well.

I ended up buying two 8GB sticks of Patriot brand RAM at my local Fry’s. It was about the same price as Amazon, but I figured it would be easier to return in the event that my laptop didn’t like it. The part number on my RAM’s packaging matches the RAM at Amazon, but it differs slightly from what memtest86 displays.

At first, I sure thought it failed. I went straight into the BIOS and saw the dreaded 6 GB of RAM mentioned on the HP forum…

So I booted right up into my operating system, a 64 bit Linux system. It seemed to see the full 16 GB of RAM just fine. I didn’t think of a quick way to consume and exercise 16 GB, so I restarted the computer and fired up memtest86. Memtest86 detected everything just fine, and I watched it walk through a few tests on all 16 GB. It seemed pretty happy, but I did not run an exhaustive test.

Does it work with Windows 7?

“Task Manager” shows that all 16 GB of RAM is available. I took a picture of the “Task Manager” window and added it to the gallery.

Why does the BIOS see 6 GB?

Shortly after I purchased my DV8T, I ordered one for each of my parents. Their DV8T laptops do not have quad core Intel i7 chips like mine. They have i5-450M chips. That makes them very different beasts. I have absolutely no idea if the i5-450M of the DV8T will support 8 GB memory sticks.

I was previously mistaken in saying that my parents’ dual core DV8T laptops were using Core 2 Duo processors. They are in fact using i5-450M processors.

The DV8T-1200 with the i5-540M will not support more than 8 GB of RAM. The machine did boot and run just fine with the two 8 GB sticks of RAM installed, but the BIOS and operating system only saw half of it.

I’ve been running with 16 GB of RAM now for a few days without any hiccups. I feel it was an inexpensive and worthwhile upgrade. Extra disk cache never hurts, and now I have a little more breathing room when I need to run a handful of virtual machines.