Brian snagged me a handful of the original CloudFree smart plugs for Christmas. I immediately opened them up, attached them to my network, and I put various lights around my office under the control of Home Assistant.

The exciting thing about the CloudFree devices is that they don’t require the servers in the cloud to operate. They arrive at your door preloaded with the open-source Tasmota firmware. You just have to configure them with the hostname and credentials of your Home Assistant server, and they will automatically be detected.

She seems to use about 800 watts while actively heating. pic.twitter.com/8DBbOVPp5M

I wanted more, but I was bummed out that they were out of stock.

When we talked to Kenny from CloudFree on The Create/Invent Podcast, he told us that the version 2 plugs are a huge upgrade. He’s discontinued the original switches, and he was waiting patiently for a big shipment of the new switches to arrive from overseas. They’re shipping now, and I’m quite excited.

The new switches cost a bit more, but I think they’re worth it. They’re rated for 15 amps instead of just 10. They have power monitoring just like a Kill-A-Watt power meter. Their new form factor also allows you to plug two plugs into the same outlet.

What am I doing with my six CloudFree smart plugs?!

My own Home Assistant setup is still quite dumb. I’m collecting lots of data, but I haven’t automated anything yet. It is currently just a glorified remote control with zero automation.

I’m hoping to use the power monitoring to help in automating my Rancilio Silvia espresso machine. If it is drawing power more often, that means I’m making a latte. I should be able to use Node Red to use that information to create a virtual sensor in Home Assistant that keeps track of the last time I made coffee.

The idea being that I can automatically power down the espresso machine an hour or so after using it. Then Home Assistant can power it back up when I wake up the next day. Figuring out when I’m awake will be its own can of worms.

This doesn’t seem terribly surprising, but I was excited when I realized that you don’t need any home automation infrastructure or even a WiFi access point to connect to in order to make use of the CloudFree plug’s power metering.

An unconfigured Tasmota device announces itself as a WiFi access point. You connect to that access point with a phone or computer to configure the plug. You would normally put in your home’s access point name and password, then you might put in the information to access your Home Assistant server. 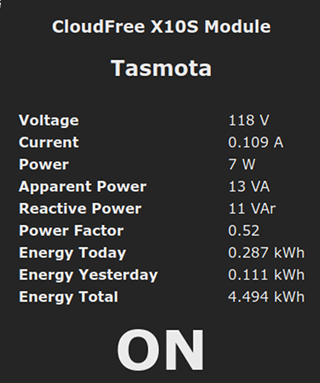 The main page of the web interface shows power usage details. Just about everything you might use a Kill-A-Watt meter for is on this page.

How awesome is that? I might have to keep one of these in my laptop bag. Not only can you meter power, but you can of course still toggle the switch over WiFi. Have you ever had to holler across a building to have someone power cycle a device for you?

This isn’t a big deal. The plugs use Tasmota’s default telemetry reporting settings. That means they send data to Home Assistant every 60 seconds.

When I installed my first CloudFree plug on my Rancilio Silvia, it didn’t seem to be reporting any information at all. Then I noticed the kilowatt hour meter was indeed slowly climbing. The trouble was that my espresso machine’s heater doesn’t run long enough to be active when data is uploaded to Home Assistant.

My quick Google-fu told me to change the TelePeriod setting. The minimum is 10 seconds, and this certainly did the job. I was seeing my espresso machine jump to 800 watts every time it turned on.

This worked, but it wasn’t the correct answer. Adam from the Local Bytes store told me to check out Tasmota’s PowerDelta setting. This doesn’t use a timer. Telemetry is sent to Home Assistant whenever the power usage increases by a set number of watts. I set mine to 5 watts.

Now there is almost no delay between the espresso machine heating up and Home Assistant knowing about it.

Kenny Stier from CloudFree told us how he uses the power metering to make his deep fat fryer smarter. He is able to power up the fryer from his phone before he heads home, and the power metering on the CloudFree smart plug lets Home Assistant tell him that the oil is up to temperate. That’s pretty slick!

I’m going to work on putting together the last few pieces of my own puzzle here. In my old OpenHAB setup, I used a combination of data to determine whether I was sleeping or not. Are my computers idle? Is my phone charging? Has the Fire TV been used in the last hour? Is my phone screen off? Is my phone at home? If all of this was true, I was probably asleep.

My charging habits are a bit different these days, so I’m going to need to figure out how to determine when my espresso machine needs to turn on in the morning. Once I do that, I’ll just need to figure out when to have Home Assistant turn it back off.

What do you think? Are you using power metering to aid in your home automation actions? Are you using Tasmota? Are you flashing your own plugs, or are you paying a few extra dollars to let CloudFree do it for you? Let me know in the comments, or stop by the Butter, What?! Discord server to chat with me about it!