I have been using Windows on my 2-in-1 laptop for a little over a month so far. My hope was to be able to skip installing Linux on this machine. I figured I’d be able to mostly treat this thing like I would an overpowered Android tablet. For the most part this is working out well!

One of my complaints about Windows 11 is that the interface doesn’t allow for much in the way of customization. Sure, you can change the color theme, but the buttons and icons have to be where Microsoft decides they should be.

This wouldn’t be a big deal if my Asus Vivobook Flip 14, as seen used by Billy Butcher in season 3 of The Boys, was just an ordinary laptop. Who cares what the start menu looks like when you are sitting at a keyboard? You just tap the Windows key, start typing the name of what you want to run, and hit enter. I don’t know about you, but I barely even look at the start menu when doing that.

I find myself folding that keyboard back and out of the way ever single day, and every time I do, the shortcomings of the Windows 11 start menu become extremely apparent.

I pretty quickly found a handy open-source tool called ThisIsWin11. It has a list of tweaks and registry hacks and things that it can apply to Windows 11 for you. Some of these tweaks disable telemetry, some enable features that were available in File Explorer in Windows 10, and it can disable things like Microsoft Teams and Skype.

ThisIsWin11 is also a lazy interface to let you install some handy software. Under their “Best Apps for Windows 11” heading are two really nice software packages: StartAllBack and Files.

StartAllBack lets you customize your taskbar and start menu, and it is fantastic. I even went to their web site and was all set to plunk down my $5 for a license, but then I read about what happens if you don’t pay. It says it will start nagging you on every boot, and that the license is tied to serial numbers of your motherboard and boot drive.

Ugh! That sounds like the nonsense we had to deal with in the nineties. I didn’t want to support that, but since I knew what I wanted to be able to do, it was easy for a quick Google search to point me to Open-Shell-Menu.

Before we talk about that, though, you should absolutely check out the Files file manager. Files is a clean, feature-packed replacement for File Explorer, and it is open-source.

Open-Shell-Menu is free and open-source. It seems as though it will let you tweak nearly everything related to the start menu that StartAllBack can tweak and maybe even a little more. StartWinBack has a much nicer interface.

Open-Shell-Menu doesn’t quite work correctly on Windows 11 unless you also install ExplorerPatcher. The combination of these two open-source software packages should give you most of the functionality of StartWinBack.

What can you do with Open-Shell-Menu? You can make your start menu look more like Windows 2000 or Windows 7. You can have a much longer list of frequently used programs on your start menu. You can also configure exactly what you want on the second column of the start menu.

Why did I modify my start menu?

I am guessing that I use my Asus 2-in-1 as a tablet roughly 20% of the time, and I can’t even guess how many times the default Windows 11 start menu has made me grumpy!

There are dozens of things pinned to my start menu that I will never use, and there are a few things that just don’t want to show up even when I pin them. The recommendations rarely have anything I want to click, and I have been finding myself wishing I could add at least one more folder to click on next to my downloads, videos, and pictures. 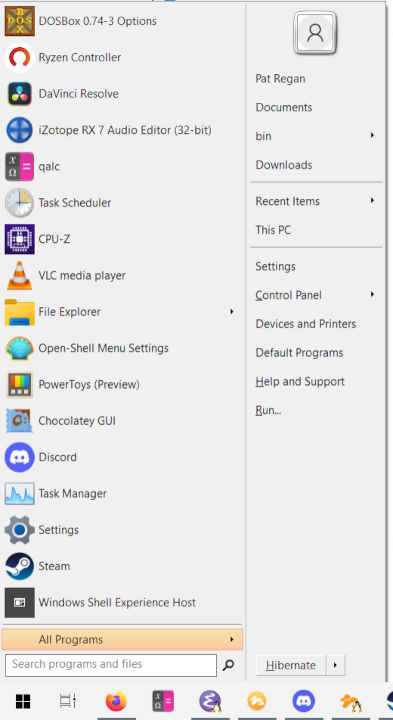 It seems like I regularly have to tap the start button, tap in the search box, type two or three characters into the on-screen keyboard, then select the thing I want. I shouldn’t have to tap six times to open Into the Breach.

This is still problematic! When I open Into the Breach the most recent program on my start menu is Steam. That is absolutely not what I want, but it does make sense, because every Steam game on the start menu is just a link to a Steam URL. I sort of avoided the problem by adding a link to the Steam menu to the second column.

My farting around while working on my recent Windows 11 blog posts has gotten me to a point where I have a lot of junk in my recent and frequent programs list. I am sure that will sort itself out over time.

What do you think? Am I doing the right thing by using Open-Shell-Menu? Do you prefer StartAllBack? Did I miss something even better? Let me know in the comments, or stop by the Butter, What?! Discord server to tell me about it!