We had some server hardware problems here at patshead.com last week. At first it looked like one of the hard drives in the RAID 10 failed. It dropped out of the array, and when I added it back into the array, the rebuild speed was less than 4 KB per second. I have some spare drives here, so I planned to drive out the next morning to replace the drive.

Another drive dropped out of the array overnight, and it had the same abysmal rebuild speed when I tried to reuse the drive. I did some more investigating. I was now seeing timeout errors in the logs for three out of the four drives, and I couldn’t get any more than 500 KB per second write speeds out of any of them.

It was starting to look like a disk controller failure. I power cycled the server. I was hoping that I’d luck out and it would come back up. It didn’t. It was going to take a few days to buy new hardware, so I temporarily moved the blog over to my tiny little secondary DNS server. The little guy with his 128 MB of RAM seemed to hold up well enough. I’m not sure whether to be relieved or disappointed about that!

I am most definitely relieved that everything is back up and running again.

I am very excited about this. Seafile released their 2.0 beta client right in the middle of my server outage over the weekend. I’ve been impatiently waiting to try it out since Sunday night. 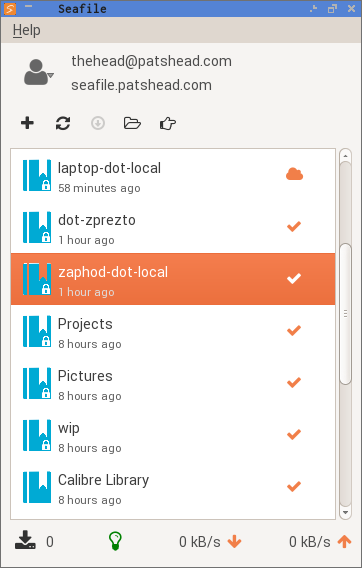 This new release replaces Seafile’s local web interface with a native QT application. The new client seems to have most of the functionality of the old web client, and it feels much snappier, too.

There is a very important new feature in the beta client that I’ve been waiting for: You can now create encrypted libraries in the client without having to send your passphrase up to the server. I haven’t checked the source code to verify that this is actually happening, so if you’re more paranoid than I am, you might want to check it out for yourself.

In my opinion, this is a huge win with regard to security, and hopefully the first of many similar improvements. This means that I barely need to have any trust in the server at all to securely store and synchronize my files.

I still have to trust the server if I want to restore something from my history. I can live with that for now, though. If history browsing and file restore capabilities make it into the new client, I won’t have anything left to complain about!

My paranoid upgrade to 2.0

I’ve been using the same virtual machine and Seafile installation ever since I first started trying out Seafile. I know that I first tried synchronizing some test data with a bare minimum Seafile configuration, and I know that I upgraded that setup to use Nginx with SSL encryption later on.

I couldn’t decide if I actually set up my current encrypted libraries after I enabled SSL. Since the NSA is tapping the Internet backbone, I thought it would be best to err on the side of caution. I ended up wiping out my old libraries, choosing new passphrases, and reuploading all my data. 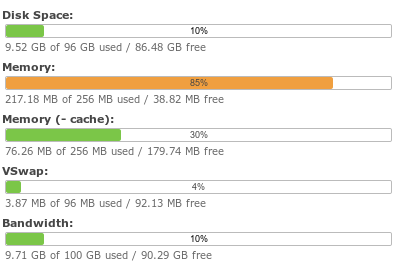 It wasn’t too bad. It took less than an hour to upload everything. My laptop caused a bit of trouble, though. It only took a few minutes to connect up the libraries that are shared between my two machines because the data was already on the laptop.

Seafile was spending an awful lot of time trying to index my ~/.local directory. I was surprised to find that my Steam library was stored in there! I guess Valve changed the default location at some point. There isn’t much value in backing up my collection of Steam games, so I added it to a seafile-ignore.txt file. The library uploaded in just a few seconds after that.

It shouldn’t come as much of a surprise that Seafile’s server component is very lightweight. They offer a build for the Raspberry Pi, and I bet it runs just fine on that tiny platform. My Seafile virtual machine is configured with only 256 MB of RAM, and more than half of that is free.

It would be no trouble at all squeezing Seafile onto even the smallest virtual private server.

Are you running Seafile on a Raspberry Pi or some other tiny piece of hardware? I would love to hear about how that’s working out!