I’ve been doing a terrible job reading books this year. I read a dozen books last year, but I’ve only managed to complete five so far this year. I was doing alright up through March, but then I didn’t complete another book until June. I’ve done even worse since then. I’ve been doing such a terrible job that I received an embarrassing email from Goodreads reminding me that I’d been reading the same book for four months.

It isn’t the fault of the book. I place the blame on some combination of Team Fortress 2, Game of Thrones, and Borderlands 2. When the choices are reading a few chapters or playing one more round of Team Fortress 2, Team Fortress 2 usually wins. I also managed to accidentally watch every episode of Red Dwarf for the fourth or fifth time.

Why I chose to read The Other Eight

I have a long list of books written by well-known authors that I would like to read, but I try to sneak in books from authors I’ve never heard of as well. I usually pick those books from the StoryBundle.com bundles.

I have already heard of Joseph Lallo, though. I’ve already read of his science fiction novels, and I enjoyed them both. Those books are very important to me and to this blog, because they are the reason that I follow Joseph Lallo on Twitter.

If I didn’t follow him on Twitter, I would have never found my most excellent editor, Claudette Cruz. She makes sure that I don’t leave out any commas, and fixes all sorts of embarrassing mistakes that I have made. This blog wouldn’t be the same without Claudette’s proofreading! 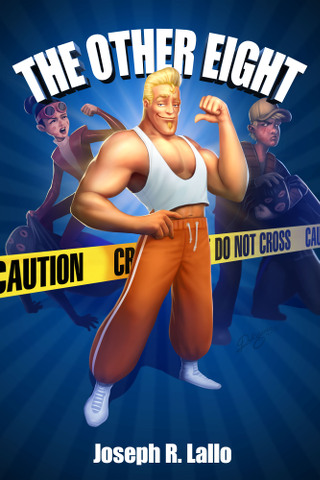 The good news is, superheroes exist. The bad news is, most powers are worthless and most heroes are insane. The Other Eight is the story of the US Army’s latest attempt to find a team of worthwhile heroes and the farcical reality show of a recruitment drive that results from a security leak that makes the secret project public knowledge.

The Other Eight was definitely a fun read, and it is exactly the sort of story you’d expect to find after reading the synopsis. There are plenty of fun characters. My mind was alternating between hearing the voice of Phosphor as either Zeke from the videogame Infamous, or as the engineer from Team Fortress 2. They are similar enough voices, and both felt very appropriate.

Phosphor has a unique super power. He can reach into the bag that he carries and he can pull out a fluorescent bulb, and there will always be another one in there no matter how many he pulls out.

I’ve decided to reread the Red Dwarf novels. I read both while I was in high school, and I was completely unaware that the books were based on a television series. The books incorporate story lines from the television show, while also providing a much deeper backstory.

I haven’t reread any books in years, so this should be interesting!