We almost didn’t make it to the Texas Pinball Festival, even though it isn’t much more than 15 miles from here. Do you know why we almost missed it? We didn’t know it existed until the day before the festival began! I noticed a tweet from Ben Heckendorn go by mentioning that he had landed in Dallas. I just assumed it was a layover, but a few hours later he tweeted about the Texas Pinball Festival.

Since I now knew that there was a pinball festival, and I knew how close it was, I immediately informed my friend Brian that we needed to attend. Neither of us have played much pinball, but we do happen to be arcade enthusiasts. We figured that there must be something there for us to see! 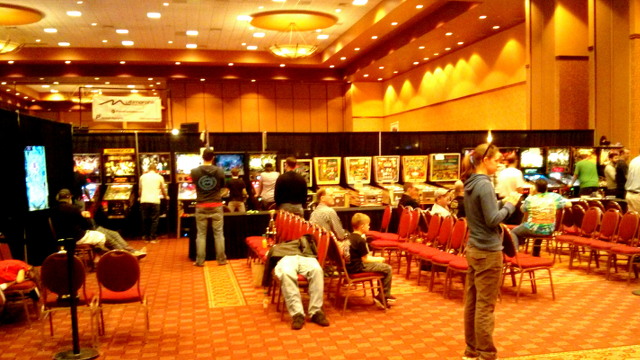 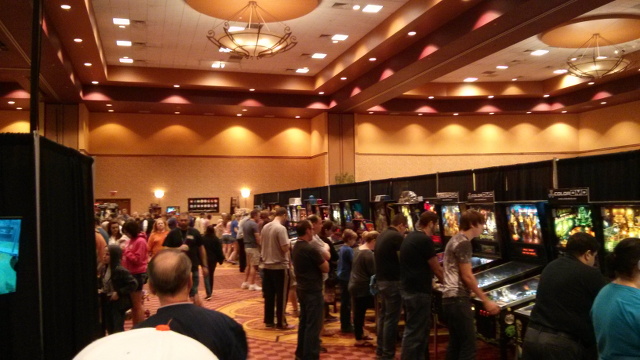 It was an impressive sight to see. I’ve never seen so many pinball machines in one room. They were all lit up, and most of them were being played. It was much like the familiar sounds of the arcades that I grew up in, but it was even louder, and it seemed like you could walk forever and not escape those wonderful noises.

I am not much of a pinball player. I mostly ignored the pinball machines when I was a kid, and I gravitated towards the video games at the arcade. This wasn’t much different. All the games were free to play, and I only played one round of pinball. Just like when I was a kid, I spent a lot more time playing Joust at the Texas Pinball Festival than I did playing pinball machines!

That doesn’t matter, though, because there were a lot of interesting things to see!

One of the first things we noticed after walking in the door was a Star Trek The Next Generation pinball machine, but something about this pinball machine was a little off. 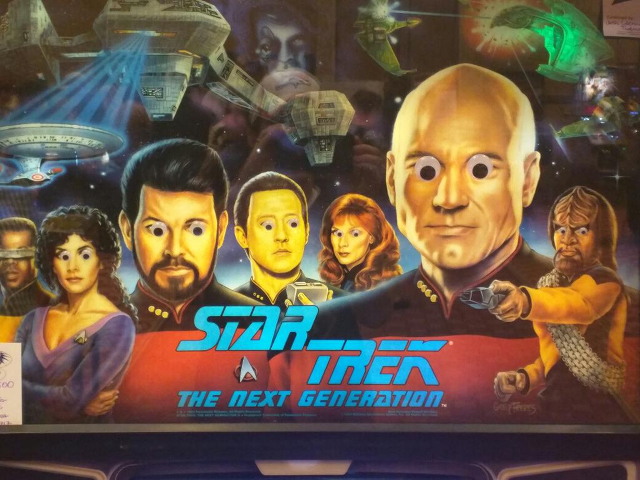 Someone had placed googly eyes over the eyes of the crew of the starship Enterprise! It was well executed, and I particularly enjoyed the look on Lt. Worf’s face.

There were a pair of Star Trek pinball machines almost hiding in a corner. One was obviously in better condition, and the artwork was much more detailed. We snapped a few pictures, and I read the sign above one of the machines talking about some of the upgrades he’d made to the nicer looking machine. 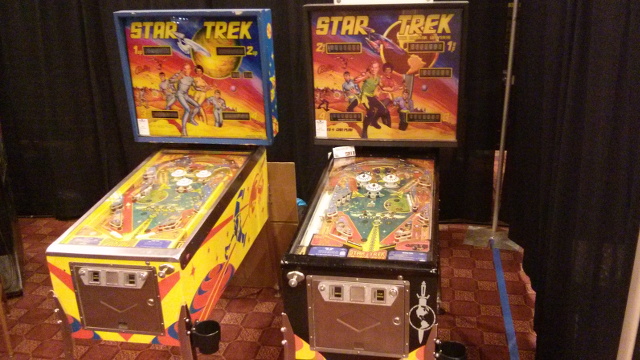 Unfortunately, these machines weren’t powered up while we were there. The mirror universe machine was upgraded with a Nixie tube score board, and I would have really enjoyed seeing that lit up!

This is another one of those times where you notice just how unobservant we are. This was one of the most beautiful machines at the festival, and it was one of the first pinball machines you see when you walk in the door. We managed to walk straight past it to look at the Star Trek machine with the googly eyes. In fact, we didn’t notice the machine until our third lap around the room. 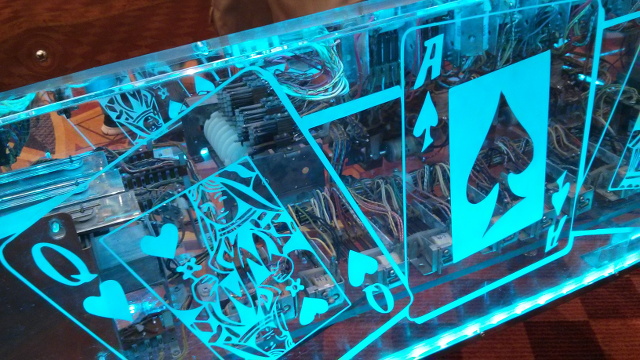 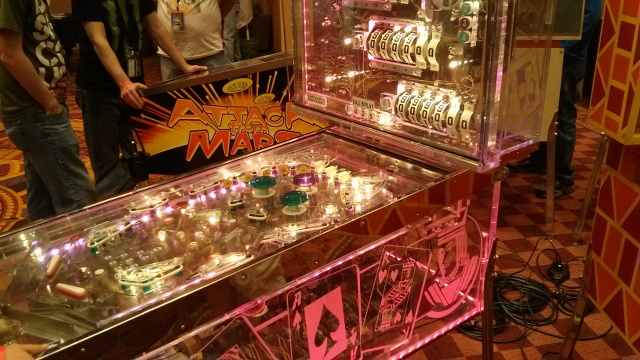 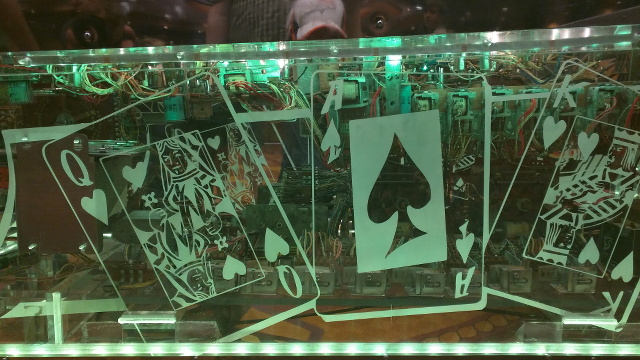 This was an amazing machine. It is an old-school electromechanical pinball machine, but all the opaque panels have been replaced with clear acrylic. I thought modern pinball machines had a lot of machinery inside, but they don’t hold a candle to these old-school machines. I was surprised at just how much equipment there is inside a machine like this, even though they have much simpler play fields than newer machines.

All the original artwork was reproduced and sand blasted onto the acrylic panels, and the whole thing is lit with color-changing LEDs. This is a really impressive build, because I know first-hand how fragile acrylic panels can be. I can’t even imagine how difficult it must have been to drill all those holes to attach the bumpers, flippers, and other bits!

It was hard to miss the iconic DeLorean parked in the back corner of the room. Unsurprisingly, it was parked next to a Back to the Future pinball machine. 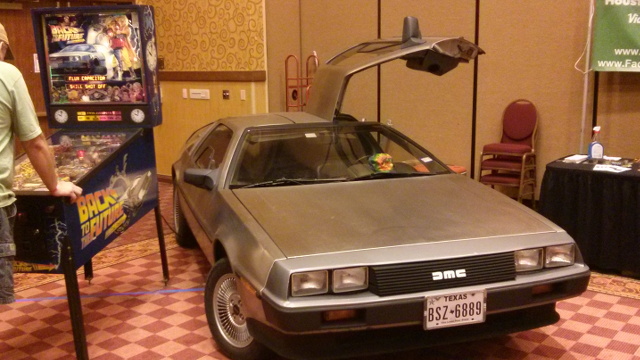 I don’t have a lot to say about this, but it is always fun to see a DeLorean. Especially one that is in good condition, like this one. I usually only run into the beat-up specimens.

There was a display with about half a dozen virtual pinball machines. Virtual machines are like MAME for pinball. Instead of a physical play field, there is a 21:9 LCD panel. The more expensive models had a second screen in place of a score board, so that the virtual artwork could match the game. There were also models with force feedback motors to make the game feel more real.

The idea seems appealing. If you’re going to use up some of the limited space in your home, why not have a pinball machine that can play more than one game? I tried one out, and I didn’t like it at all. The response time of the 21:9 monitors used in these machines is too slow. The ball looks absolutely terrible while quickly shooting around the play field.

I’d like to try one of these pinball games on the 120 Hz LCD panels on my desktop PC. I think it would look a lot better, but I’m not convinced that 120 Hz would be fast enough, because a pinball moves across the board at quite a high speed. Unfortunately, the Pinball FX game they were running at the Texas Pinball Festival isn’t available for Linux, so I won’t be trying it any time soon.

A cocktail arcade cabinet for ants 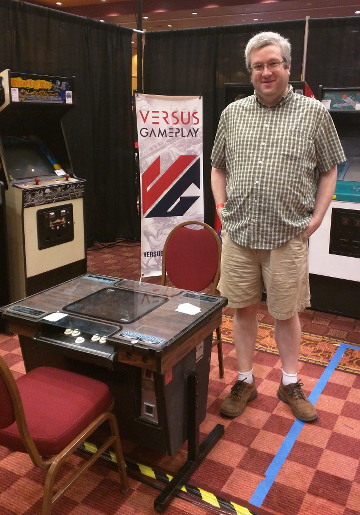 I didn’t remember just how child sized real cocktail cabinets are. Those little cabinets barely come up to my knees! I’m so glad I didn’t built a life-size cocktail cabinet. My back would be so angry!

If they do this again next year, I definitely look forward to attending. I wonder if they’d let me bring my custom arcade cabinet to show off!