A little over three years ago, I bought a Chuwi Hi12 2-in-1 tablet. It was an amazing piece of hardware for the price, even if it was woefully underpowered. It uses the same beautiful display as whatever version of the Surface Pro was current back in 2016, so it looks quite good.

It has a lot of shortcomings. The keyboard is usually OK, but sometimes it has trouble staying connected to the tablet. Did I mention that the Chuwi Hi12 is slow? I knew that before I bought it.

We ride the electric bike and unicycle about two miles so far. We made it to the covered picking tables!

I'm able to for my 12" 2-in-1 and the Nintendo Switch on my small laptop bag. I'm working blog words, and @Libbets is playing #AnimalCrossingNewHorizons pic.twitter.com/xjVn2RzBeA

I used the Chuwi as my portable blogging, web surfing, and social media machine for 6 to 12 months. I occasionally wake it back up for a week or so when my big laptop is just too big and heavy to haul around.

I’m doing that again this week, because I learned that I can fit my Chuwi and Nintendo Switch in my smallest laptop bag; it is a shoulder bag. Loaded up with gear, it weighs 4.5 pounds: that’s lighter than my big laptop! I have no trouble at all carrying that back when I cruise through the park on my electric unicycle.

Every time I bring out the Chuwi, I am reminded of all sorts of things that bum me out about Windows 10. The last few times this happened, I might have written a few tweets and forgotten about it. This week, I’m practicing my social distancing. I don’t have anything better to do. I may as well write about what I’ve been thinking!

I’m not testing anything that I’m complaining about! 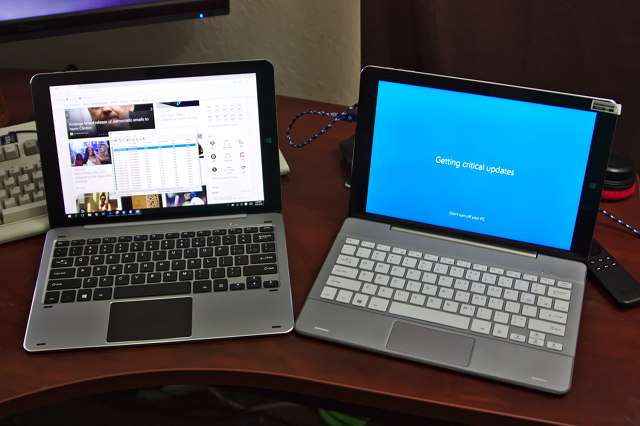 If any of these problems are fixed, you can yell at me in the comments. Microsoft sells their own tablets loaded with Windows 10. The things I’m complaining about should never have been an issue. It is embarrassing enough that they were problems three years ago.

There is a huge lack of touch-friendly software

There are currently 1,784 games in my Steam library. More than a few of those games seem like they would be awesome games to play on a touch screen while sitting on the couch. A reasonable subset of those games already have Android and IOS ports, so surely I will be able to play some of them.

X-COM, FTL: Faster Than Light, and Prison Architect all have Android or IOS ports. I figured they’d work great on my Windows 10 tablet. Nope. You can’t play these games without two buttons on your mouse.

Sure, there were a lot of games I couldn’t even attempt to play due to the specs of my little Chuwi Hi12. Of the ones I could try, the lack of an easy way to right click was going to be a huge problem. I was excited about trying Torchlight, but that wasn’t going to work, either. 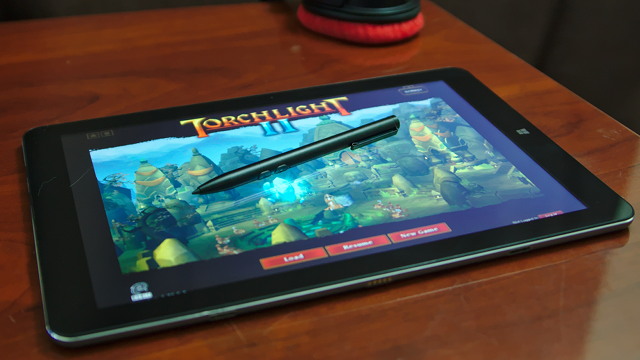 Attempting to play Torchlight 2 with a pen. It was terrible.

The problem isn’t just games. There’s no good Twitter app. The official Twitter app is built for a phone. There’s no good Reddit app. I don’t remember which streaming services were lacking apps, but some were. Of the ones that had native Windows 10 apps, I remember Hulu completely lacking the user profile feature.

I am certain that I would complain less about using a web browser to access these things on a faster Windows 10 tablet, but it would only be a partial fix. The Reddit website is garbage compared to Red Reader on Android.

I don’t understand why Microsoft hasn’t fixed this problem

Remember when Microsoft signed a $400 million contact to make the Surface Pro the official tablet of the NFL. If I’m remembering correctly, TV personalities kept accidentally referring to the Surface Pro as an iPad.

Why haven’t they invested a small fraction of that cash into paying developers to make touch-friendly versions of their software? How much would they have to pay Subset Games to add touch support to the Windows version of FTL: Faster Than Light? They already figured out how to make the game work without a right mouse button on the iPad.

I’m sure you can come up with a list of games you’d like to play while sitting on the couch: Cities Skylines, SimCity, Civilization 5, Civilization 6, or RimWorld.

I’m sure they could throw money at Hulu, Netflix, HBO, and Disney, too. They could make their tablet ecosystem so much better, and it wouldn’t cost anywhere near $400 million.

Why is the on-screen keyboard so terrible?

When I bought my Chuwi Hi12 in 2016, the touch keyboard didn’t even support gesture typing. This was already ages after Swype hit the market, and Android had already supported this in their standard keyboard for quite a few years at this point.

One day, I turned on my tablet, let it spend a few hours updating itself, and my keyboard now support swipe typing. Awesome!

Except it didn’t always work. It would be disabled in some text entry fields, sometimes for no obvious reason. You want to type a search term into the URL bar? Too bad! Nobody should want to swipe to type a URL, so no swiping for you.

Shouldn’t it? That’s what I’ve been hoping.

I’d like to carry fewer devices. Phones and tablets are great for consuming content, but they’re terrible for creating content. Why can’t I have one device that does both?

I need a good text editor and a decent keyboard. Emacs works just fine on the little Chuwi tablet. It gets sluggish at times, though. I know Emacs has some serious inefficiencies on Windows, and those are only exacerbated by the Chuwi’s slow Atom processor and lack of RAM.

Emacs covers a lot of my input needs. I can write blogs and code with Emacs, but being able to edit video on the road would be nice. I would never have the patience to attempt this on my Chuwi tablet, but a proper Surface Pro would do the job just fine.

It is too bad the tablet side is so lacking

The Chuwi is a passable if large e-book reader. I forget which epub reader I tried, but I remember setting the color palette to something similar to the Solarized Dark theme. That worked well enough, so I’m sure I’d be happy using a Surface Pro to read fiction. 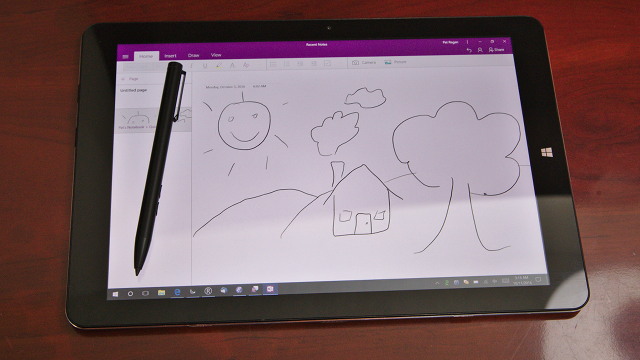 Twitter was a bear, because the Chuwi is just too slow to render Twitter’s web interface quickly enough. Even without the speed issue, using the Twitter website with a touch interface isn’t nearly as good as using something like Twidere on my phone. That point is moot now, because so many good Twitter apps on Android are being deprecated.

I wound up learning after forcing myself to use the Windows 10 tablet for a month or so that it was just easier to consume content on my phone. I didn’t need to figure out where I left off. I didn’t need get myself out of sync or lose an article when I was using my phone in the car and my tablet in the house.

Some of this wasn’t too bad in the old days when I had an Android tablet. My Twitter app tried to keep my spot in sync between devices.

The phone just isn’t as inconvenient today as it was in those days. When I had a 4” phone and an 8.3” tablet, the tablet seemed luxurious. Now that I have a 5.7” phone, the difference isn’t as important.

What do I carry today?

The real answer is that I don’t carry much at all. I don’t often leave the house with anything more than my phone. Sure, I take my FPV quadcopter gear with me a few times a week, but that has nothing to do with Windows 10!

This has been on my mind again because I’ve been learning to ride my InMotion V5F electric unicycle. It has about 12 miles of range, so it has no trouble getting me to the shaded pavilion full of picnic tables near the lake. That’s only a 2-mile ride from my house!

I can ride with a 20-pound backpack without trouble, but carrying less is nicer. I’ve carried my big, heavy Linux gaming laptop with its 16 GB of RAM, i7-7700HQ CPU, and Nvidia 1050 Ti GPU. It is fine. My heavily loaded laptop backpack only comes in at 12 pounds.

This seemed like a good excuse to pull the Chuwi tablet out of mothballs. I loaded up my little purse with the Chuwi, its keyboard, my Nintendo Switch, and all sorts of cables and adapters. It still weighs less than 4.5 pounds. That’s less than my gaming laptop weighs on its own.

Would it be nicer to carry a Surface Pro?

Yes, but I can’t justify the price. Your opinion might be different, but based on my needs, even the most expensive Surface Pro is generally a downgrade over my giant laptop from 2017. Do I want to spend $2,000 for a smaller yet more portable screen? The value goes down significantly more for me, because I’d have to run Windows 10 instead of Linux.

It seems like I can get a refurbished, reasonably equipped Surface Pro somewhere in the $500 to $650 range. Something with twice as much RAM and quite a lot more CPU horsepower than my little Chuwi tablet.

If I was having more luck and more fun with my Chuwi tablet, I would probably jump on a $650 refurbished Surface Pro. As things stand today, I don’t believe I would get much use out of it.

If I could play some FTL: Faster Than Light, Prison Architect, or RimWorld on a Surface Pro, that would be nice. Unfortunately, I can’t. At least not without a keyboard and mouse. That makes a huge percentage of the potential value of me evaporate away immediately.

The fact that I prefer a Linux laptop doesn’t help, either. I really want everything I have on my desktop on a laptop, then I want that same laptop to feel like an Android tablet or iPad when the keyboard is unplugged. We aren’t there yet. We aren’t even at a point where I would enjoy the compromise.

What do you think? Do you use your Windows 10 2-in-1 in tablet mode a lot? Do you also prefer your phone for surfing things like Twitter, Reddit, and Hacker News? Let me know in the comments, or stop by [the Butter, What?! Discord server][bwd] to chat with me about it!