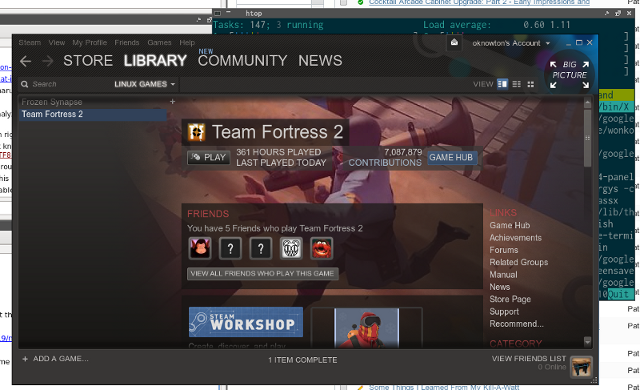 It has been a while…

Steam tells me I haven’t played Team Fortress 2 since March 7th, so my abilities and my memories here may be a little rusty. The Steam Linux Beta seemed like a good excuse to play again, though!

Performance under Wine, eight months ago

The relevant specification of my laptop:

With the native Linux Team Fortress 2 client I am able to play at 1920x1080 without any problems. I’m mostly seeing better frame rates than I had in March under Wine. I did check out that wide-angle view on the “Upward” map and I’m seeing 25 frames per second there now.

What else changed besides Wine vs Native?

This is exactly the same laptop I was using back in March. I’m running the 304.51 revision of the NVidia driver now; back in March I was likely running 290.x or 295.x.

I am running with a pair of 1080p LCD panels connected to my laptop. I expected it to do something stupid when I fired up Team Fortress 2. I was pleasantly surprised when it actually did the sanest thing possible.

It opened up a full-screen, borderless window on one of my displays. I had no trouble using my usual window manager hot keys to move the window over to the other monitor. I was completely free to click around the Team Fortress 2 menus or my other open windows. The game didn’t grab the cursor until I was actually actually playing. If I wanted to do something outside the game, all I had to do was hit escape to bring up the in-game menu.

This is exactly how full screen games should work.

Update: A recent update made full-screen support a bit less ideal. Now, when you click away to another window, you “full-screen” Team Fortress 2 is automatically minimized! I fixed this by adding export SDL_VIDEO_MINIMIZE_ON_FOCUS_LOSS=0 to my .zshenv file. Now I can comfortably poke around in my web browser in between rounds again!

I might have to put our Team Fortress 2 server back up!

I upgraded to the 310.14 driver last night. I installed it the lazy way (apt-get install nvidia-experimental-310). I’m now getting just shy of 70s frame per second on that wide-angle death view on “Upward” instead of 25!

Update: I started using the dx9frames configuration again. I seem to be too used to the lower quality graphics settings. With the default settings, I had kept mistakenly thinking that BLU team players that were on fire were actually on the RED team. I probably could have gotten used to this, but now my frame rates aren’t dipping down as low.

If you use the dx9frames configuration, I highly recommend that you flip the value of glow_outline_effect_enable from “0” to “1.” If you don’t, you’ll have an awful time using “The Scottish Resistance,” and you’ll never know where the cart is.