I installed the game as soon as I could and gave it a try. The first two missions most definitely reminded me of Wing Commander. The steering with the mouse is pretty similar, but the aiming is very different. In Wing Commander, you have to line up your shots using the crosshairs in the cockpit—you could only fire directly ahead. Your ship fires towards the mouse pointer in Strike Suit Zero, and the pointer turns red when you have a viable shot lined up.

Things were going so well right up until I unlocked the strike suit. Using the strike suit is absolutely nothing like Wing Commander. When you transform into strike mode, your ship becomes almost stationary. In strike mode, the goal is to lock on to many targets simultaneously with missiles or use the auto targeting with the primary weapon.

I did not adjust to this transition at all. I failed this mission over and over again until I finally gave up.

I was traveling at the time, and I only had my laptop with me. On my laptop, the frame rate would drop considerably when lots of things were exploding. Between that and my inability to pilot the strike suit, I didn’t see much point in playing anymore.

I tried the game again a few weeks ago, and I am very glad that I did. You can retry previous missions with the upgrades you’ve earned in the harder missions. I decided to go back to the first mission using the strike suit, and I got as much practice as I could by using strike mode at every possible opportunity.

The practice definitely paid off. I’m not sure how many times I had to retry the mission where you acquire the strike suit, but I know it wasn’t very many! After that, it was relatively smooth sailing. 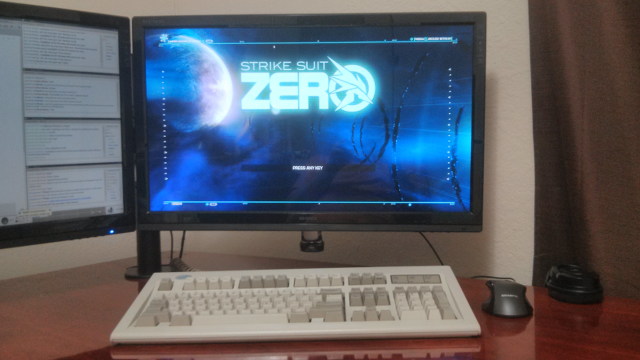 I’m having quite a bit of fun now. The entire game is basically what every space combat movie or television show is all about. You’re one of the guys in the small fighter craft. Most of the time you’re in dogfight with other fighter craft. Sometimes you’re strafing in close to huge battleships taking out their big guns so your own battleships can survive.

I’m a bit stuck right now near the end of the tenth or eleventh mission. I just can’t seem to keep my carriers alive! I’m sure I’ll get it, though.

I’m disappointed that I took a dislike to the game so early on. I almost bought gift copies of this Humble Indie Bundle for all my Wing Commander loving friends, but I decided against it as soon as I encountered the strike suit. I don’t know if my wallet is deep enough to buy so many copies at full price, though!

I’m looking forward to finishing the game, and I’m definitely considering buying the DLC. Strike Suit Zero runs great on Linux, but I have had an occasional crash when completing a mission. I only lost progress because of this once. I’m having no trouble running the game at 2560x1440 on my computer.