There is a new coffee trend called bulletproof coffee. I can’t avoid reading about it. It has shown up countless times on Twitter, Stumbleupon, and in my RSS feeds. It sounds more than a little strange, but every time I read about it, I want to give it a try.

The most intriguing part of the recipe is the recommendation to use Unsalted Kerrygold Pure Irish Butter, and the shipping cost on this stuff from Amazon is extremely high. This stuff is “grass-fed butter,” and I had absolutely no idea what that does for the butter. I was over at The Allen Wickers last week with my friend Brian, and we talked about this.

Brian is correct. Butter does not eat grass. I guess most dairy cows are fed some sort of grains. The folks at Kerrygold feed grass to their dairy cows instead of grain. Apparently this leads to a different array of fats being present in their milk. They say these fats are better for you than the fats in plain old butter, but I have absolutely no idea how true that is.

I can say for certain that this Kerrygold butter is different than the other sticks of butter in my refrigerator. It is a lot softer. It takes quite a bit of effort to cut through my store-brand butter when I’m cutting up a few tablespoons’ worth for my home made pizza dough—enough effort that you can hear the clank when the knife breaks through and hits the plate underneath.

At the same temperature, the Kerrygold cuts almost like warm butter. I’m betting it tastes different, too. I’m going to bake up some French bread soon so I can try it out.

My wife, Chris, and I were at our local Sprouts market recently, and I was very excited to go. I was certain they’d have some Kerrygold butter, and I was right, so I picked up a package.

I forgot that we also needed coconut oil for this recipe, and we didn’t have any. The next night we were out at dinner with Brian and his wife, Julia. I mentioned my mistake, and Julia told me she had coconut oil at home. I asked if I could borrow some, and she said yes.

There was no good way to just borrow a couple of tablespoons, so I stole the whole jar. With all the ingredients in hand, we decided to make some bulletproof coffee earlier this afternoon.

I planned on using my little pour-over cone. I don’t use it very often, so I had to ask the Internet how much coffee was required to make the 500 ml of coffee that the recipe calls for. I did the math, and I weighed some water, and I figured out that 500 ml was probably more coffee than we were going to drink. I ended up cutting the recipe in half.

Here’s what I used:

I followed all the directions. I preheated the blender, then I added the butter and coconut oil to the blender, poured all the hot coffee in, put on the lid, and fired up the blender. 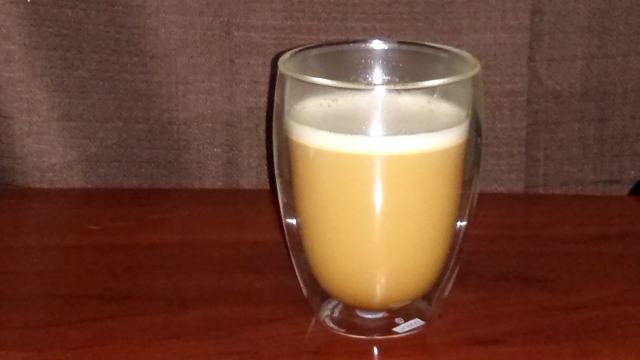 The coffee aerated quite a bit in the blender. It bulked up enough that it nearly filled a pair of my Bodum 12-oz double-walled glasses, so I’m pretty happy that I cut the recipe in half. I didn’t think to take a picture of the coffee until after drinking some, but I came to my senses pretty quickly on that front.

I like it, and I’m very surprised. I don’t like coconuts or anything coconut flavored, so I was fully expecting to not like bulletproof coffee with coconut oil. I was completely wrong. This has to be the best-tasting coffee drink I have ever made without using my espresso machine.

I added sugar to mine. I used about four teaspoons—the same amount I put in my 12-ounce lattes.

Chris didn’t seem to like hers at all. I don’t think she even finished one quarter of her coffee, whereas I finished my entire coffee. This is completely backwards. I almost never finish my coffee unless it is a latte.

Will I make it again?

We’ll definitely give it one more try. I’d like to swap out the coconut oil with extra butter and see how that tastes. Other than that, I don’t think I’ll make it again.

Making a latte with the espresso machine takes less time and effort than making a bulletproof coffee, and it’s easier to clean up. The lattes taste quite a bit better, too. I might change my mind if I didn’t have access to an espresso machine.