My air popper and 4-pound coffee bean sampler arrived today from Sweet Maria’s. I have no idea what I’m doing, and I am impatient. I opened the box as soon as it arrived, then I unpacked the air popper, plugged it in, and loaded it up with some green coffee beans! 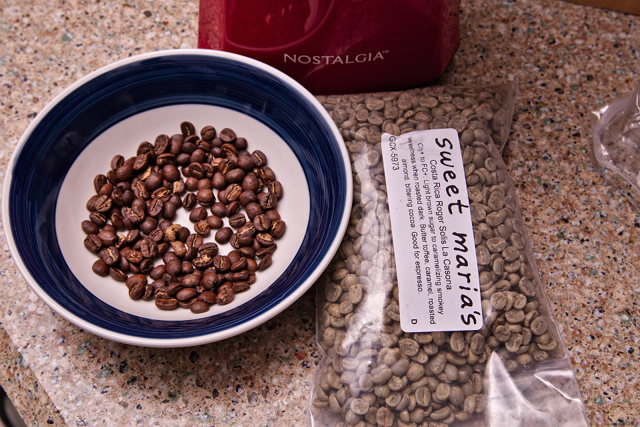 That was about four hours ago. I’m supposed to wait at least 24 hours before brewing coffee, but I’m not that patient. I roasted about 50 grams, and it takes a little over 20 grams to pull a double shot of espresso. What if 24 hours went by, and I learned that my grind was way too coarse or fine? I’d only get two tries, then I’d have to wait 24 more hours.

I didn’t want that to happen, and I was impatient.

The sampler came with four one-pound bags of coffee beans each from different parts of the world. I decided to do my test roasting with the beans from Costa Rica. I’ve had good coffee from Costa Rica in the past, but it was the least exciting of the four, so I wouldn’t mind ruining it!

I just finished my single-shot latte, and it was delicious. I roasted just about as light as I could. I’m weird, and I enjoy espresso made from light-roast beans. I’ve even adjusted the pressure on my Rancilio Silvia to help pull successful shots from light roasts!

I finished a bag of Kenyan beans from Craft Coffee earlier in the day. These freshly roasted beans from Costa Rica definitely made a better latte. I’ve been working my way through those Kenyan beans for a week, though. I can’t expect them to be comparable to beans I roasted a few hours ago, right?

What’s in the sampler?

The beans in all four bags are quite small. I don’t know what determines the size of a coffee bean, but I do know that all the best roasts I’ve ever had all had small beans. I’m assuming this is a good sign!

I’ve always enjoyed dry-process beans, and I’ve never had an Ethiopian bean that I didn’t like. I’m looking forward to trying that bag and the honey-process bag from Sumatra.

I’m used to opening a bag of recently roasted coffee. There’s a certain aroma that I expect. When that aroma is accompanied by fruity smells, I know it is going to be delicious.

Green beans smell weird. The bag of honey-process beans has a slightly different smell, but I wouldn’t be able to tell the other three apart. I am not a fragrance expert. I can’t explain what these bags of beans smell like. I can say that they don’t smell appetizing!

I have a vague idea of what I’m supposed to be doing. Don’t load too much coffee into the air popper. The beans need to be spinning around in there.

I’m aware of the concept of the beans cracking during roasting. I guess light roasts start just before the first crack, and dark roasts are stopped after the second crack. The cracking was much louder than I expected! 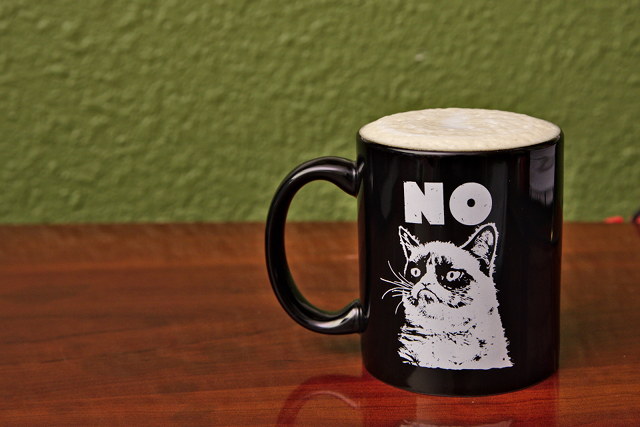 I stopped my first small batch well into the first crack. That was at after roughly four minutes of roasting, and the beans looked a little darker than I was hoping for.

I stopped the second batch shortly after the cracking started—a little over three minutes of roasting. These were just about as dark as the first batch.

I didn’t measure each batch, but I think the first batch was a bit smaller than the second. When I combined my first two batches together, the total came in at around 50 grams.

The coffee tastes good. Roasting doesn’t take long, and it isn’t a lot of work. The beans are delicious and inexpensive. Learning about roasting is going to be a lot of fun!

It takes me roughly six minutes to make a double-shot latte with my Rancilio Silvia. It would be awesome if I could roast tomorrow’s beans while making today’s latte. Even if I do one task after the other, it won’t take much more than ten minutes. There’s some waiting involved in my latte-making process, though. I wonder if I can shave a few minutes off that time by interleaving the steps!

What do you think? Have you tried roasting your own coffee beans? Are you interested in giving it a shot? Leave a comment and tell me about it, or stop by [the Butter, What?! Discord server][bw] and chat with me about it!