Update: Everything arrived. I was a little worried about the push buttons. The USPS had them marked as delivered on Friday, but they weren’t in the mailbox until Monday. Other than that, everything arrived without incident. I just wish I ordered the resistors earlier. They arrived with the last group of items, and everything else was useless without them! 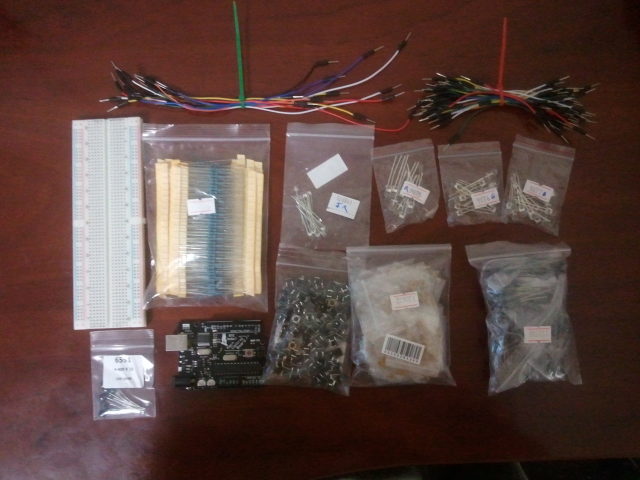 I finally took the plunge and bought an Arduino development board. I ended up ordering a knock off Arduino Uno board through eBay for $12.99 shipped. The board arrived a few days ago, and I don’t have anything useful to hook up to it yet.

I ordered an assortment of various electronics components, most of which are shipping out of Asia. This was significantly less expensive than buying locally or buying something like the Arduino Starter Kit. I just have to be patient, and I have to hope everything successfully makes the journey across the pacific.

I didn’t buy everything that is in the Arduino Starter Kit, but I think I made some pretty good selections. I don’t need any of the motors or the LCD display for any projects that I have in mind, and I have some random DC motors, potentiometers, and laser pointer parts in my junk box.

When you have a hammer, everything looks like a nail. Every problem I see lately looks like something that can be fixed with an Arduino. I don’t expect to build all of these things, but here is a list of some of the things I’ve come up with so far:

I also have a few potential uses for an Arduino in my keyboard:

I may have chosen the wrong Arduino

I’m pretty sure that it would have been better to go with an Arduino Nano. The Nano plugs directly into a breadboard, and it looks like it would be quite a bit more convenient for prototyping. I will stick with what I have for now, but I won’t be surprised if I add an Arduino Nano to my toolbox in the near future.

My first attempt at programming the Arduino

An Arduino is rather boring all by itself. It was sitting on my desk for quite a few hours before I learned that the board has an integrated LED connected to pin 13. Shortly after I figured that out, I had it programmed to blink out an S.O.S. on that LED: