For years, I had been saying that I wanted some sort of relaxing, comfortable chair for the corner of my home office. I kept saying that it should be a “reading chair.” I’m not entirely sure what that should be, but I quickly figured out that it would need to be a recliner of some sort. 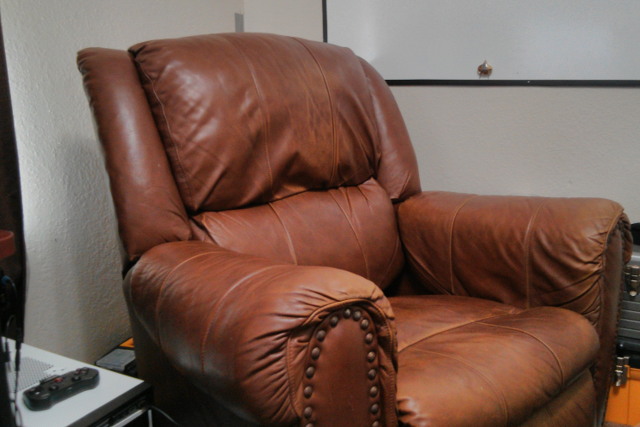 I’ve been shopping around for several years. Yes, years. Nothing I found seemed worth the time, the effort, or the money. I didn’t expect to sit in it very often. I just wanted a place to occasionally read, and I wanted something to point at the television connected to the arcade cabinet. I couldn’t justify the money to buy a quality recliner, and all the cheap recliners I tried were rather uncomfortable.

Craigslist is a lot of work

Late last year, I pulled the back seats out of the minivan and started searching Craigslist for a suitable recliner. I don’t like using Craigslist. Finding what I want isn’t always easy, and communicating with the sellers is often strange or confusing. After two months of on and off searching, I finally saw something I wanted. 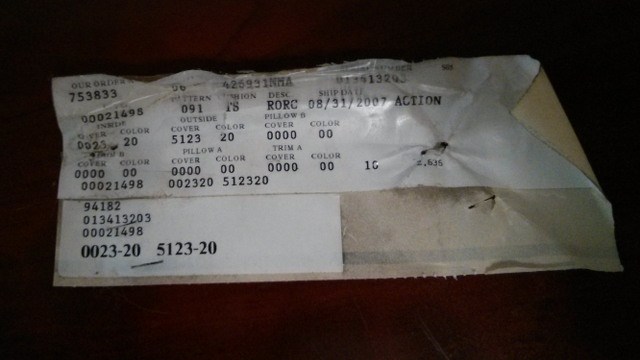 It was an older Lane recliner listed for $100. It is a big, brown “leather” rocking recliner that was manufactured in 2007. I’ve since learned that they still sell this model. It is part of Lane’s Summerlin line of furniture, and I have seen it listed for $900, but I assume you can haggle on that price.

Amazon seems to have an absolutely gigantic version of my recliner, the Snuggler Recliner by Lane. My tape measure says that that monstrosity is 12 inches wider than my old Lane Recliner. I doubt that it could fit in my already cramped office!

It appears to be in pretty good condition, but the couple that sold it to me were very insistent about me sitting in the chair before I paid for it. It was obvious that the seat cushion was sagging quite a bit, but I told them this was fine. I didn’t expect to sit in it very often.

I was wrong about that. I sat in the chair every single day, and the sagging was starting to bother me. It was alright when I first sat down, but if you wiggled around a bit you’d end up with a 2x4 bumping against your back. I decided to flip the chair over to investigate.

One of the five springs was gone

The missing spring was very obvious when I flipped the chair over. Once I saw the problem, it also became obvious that the sagging seat was leaning to one side. This ended up being really easy to fix. I was able to buy a replacement spring from Amazon for around $13.

Putting the spring in place was slightly more difficult than I had anticipated. The hooks were still in place on the chair, but stretching the spring was a more complicated endeavor than you would expect.

I have no idea what I’m doing

I ended up using a pry bar to stretch the spring into place. Then it was just a matter of using my other hand do guide the end of the spring over the hook. 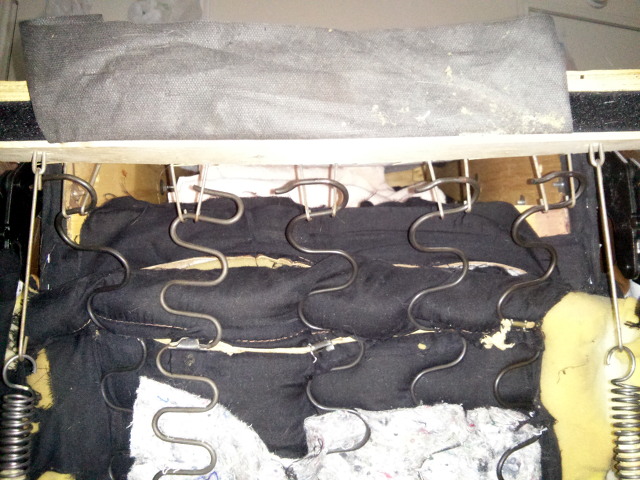 The new spring was a HUGE improvement. It made it feel like a completely different chair. This created a new problem, though. The new spring is stiffer than the four old springs. The difference wasn’t as drastic as having a missing spring, but I knew it was there.

It was Christmas time at this point, so I decided that I would wait until after the holidays to order another spring. I thought about replacing all the springs, and I still might, but the two outer springs seem to have a kind of curve to them. I’m not entirely sure if replacing them would work out well.

I got bored one night during the holidays, and the uneven springs were bothering me. I didn’t have another replacement spring, and they aren’t available with Amazon Prime shipping. I did have an idea, though, and I thought it was a good one.

The springs follow a repeating S-shape, and I decided to try stretching the opposite spring tighter by one notch. It worked surprisingly well. The seat feels very evened out now!

A flaw in my repairs

At this point, I flew up to my home-town. I bragged to all my friends about what an amazing job I did fixing up this recliner, and I told them about all the things I learned in the process.

A couple weeks after all this bragging, I flew back here and returned to my home office. After a few days of sitting in my chair, I noticed that it wasn’t as comfortable as I thought it should be. The back edge of the seat was sagging a bit, and it was getting stuck under the frame of the seat back.

If I pull the back of the seat cushion up and out from under the back, then everything is fine. At least until you sit in the chair three or four more times. Then you have to repeat it.

This was easy enough to fix. All I did was pull the remaining springs one notch tighter. I don’t know if it is perfect, but it is working out quite nicely. 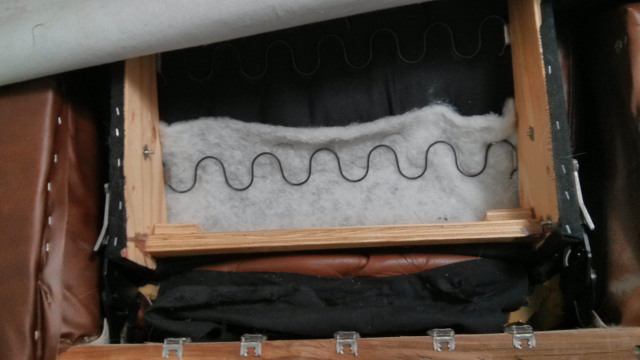 There are similar, but weaker springs in the seat back. I also ended up pulling one of those springs tighter by one notch. That made the lumbar support a bit more stout, and now my lower back never ends up sagging into the frame.

Was it worth the effort?

I think it was definitely worth the effort. At the very least, I saved a couple of hundred dollars compared to the brand-new chairs I was looking at, and this chair is much better for me. Most of the new chairs that I looked at were too small for me.

With this Lane Summerlin recliner, I don’t have to slouch to lean on the armrests, like I do with many recliners. The arms are also far enough apart that I can easily fit my elbows in between them, which is much more comfortable when using my laptop.

I am surprised how often I actually use the recliner here in my home office. Had I known that, and had I known how much I like this particular model, I would have gladly paid the $900 for a brand-new Lane recliner. I would have never figured this out, though, if I hadn’t bought this used model, so I think I made the right choice.

The repairs were easy enough, but I did spend a lot more time that I should have tinkering with the various springs. That is partly because I enjoy tinkering, and partly because I wanted to make sure I had accurate enough information for this blog post.

If your recliner is sagging like this, I’d definitely say that it is worth flipping it over and taking a look at the springs!

UPDATE I replaced all the springs!

My friend Brian said he needed my help. He had a nasty old couch to put out with the trash, but he couldn’t carry it alone. Being that I’m a helpful guy, I headed over to give him a hand.

When I got there, I realized this old couch probably has a whole mess of springs inside. We flipped it right over, and I got pretty excited. At Amazon’s prices, I bet there were $200 worth of springs under there. Before taking the couch to the curb, I cut out six or seven springs to take home.

The couch springs might be an inch shorter than the springs that came with my Lane recliner. That’s definitely close enough, and now I have a full set of matching springs. I should have purchased a full set of matching springs to begin with, because this is working out quite a bit better. Replacing the broken spring was a huge improvement, but I didn’t realize just how much the seat was still sagging after my initial repairs.

This time while I was in there, I pulled out the seat cushion foam to take a better look at it. It is in terrible condition. One of the seat springs has torn half way through on one side, and the back end has been compressed into a wedge shape.

I should replace the foam. You can get huge sheets of 4” thick high density foam at Amazon. I don’t have a good place to store the extra foam here, so I’m going to wait on that until we move into a bigger house next year. In the mean time, I rotated the cushion 180 degrees.