I bought a Shapeoko XXL CNC router, and I have almost no idea what I’m doing. What’s the first project someone should attempt on their new, freshly assembled, and untested CNC machine? Carving or cutting something with a cheap piece of scrap pine is probably a smart place to start. I may not be that smart.

My first CNC project was cutting an FPV quadcopter frame out of carbon fiber!

Carbon fiber dust is dangerous. It is extremely fine and quite conductive. It can short-circuit electronics, and it can probably cause lung cancer.

There are several interesting possible ways to reduce these risks. I’m impatient, and I have yet to test any of those possibilities. I have a filtered mask, a shopvac knockoff from Harbor Freight, and I try to cut with the garage door open.

My quadcopter frames required me to buy carbon fiber sheets in three different thicknesses: 1 mm, 2mm, and 3mm. Each is more expensive than the last. The three sheets of high-quality 3K carbon cost me about $200.

I didn’t take notes as I was working

I’ve done a bad job at documenting my experimentation. At first, my CAM software was set to inches. This seemed easier for me, because my endmills are measured in inches. Unfortunately, I kept goofing up my cutting depth when converting from metric.

So at some point, I switched everything over to metric. That’s when I got mixed up on my cutting speeds.

My first test cut with Carbide 3D’s 0.0625” endmill was into a scrap of particle board. I considered my attempt to be quite a success, even though I had to cancel the job long before it was over. 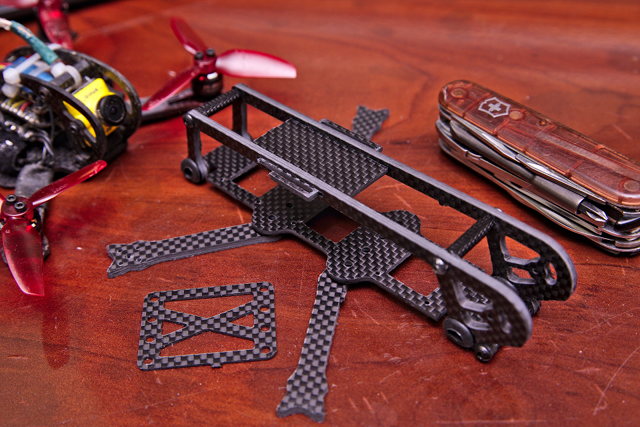 I accidentally set my cutting depth to about 0.4” instead of 3 mm. Did I set it to 0.4” manually? Did I accidentally leave something at the default? I have no idea. I just know my cut was approaching the depth limit of my endmill, so I had to cut it short!

Goofing up the cutting depth has been my most common mistake so far.

The first cuts into carbon fiber

The first thing I attempted to cut was the arm-bracing plate of my quadcopter frame. It is the only 1 mm part, and that’s the cheapest sheet of carbon fiber in my collection. It seemed like the safest place to start! 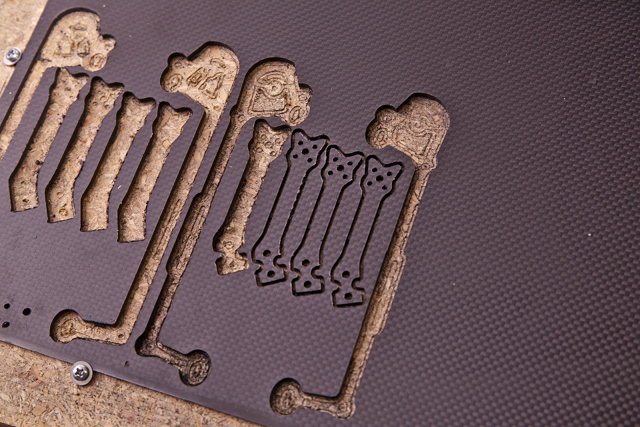 I’m sure you can guess what I did. I goofed up the depth again, and I had to stop the job early. It only got as far as cutting the perimeter. The job was set up to cut the entire perimeter first, then drill out all the holes.

I was still excited. The machine had no trouble cutting the carbon fiber. The only problem so far had been human error!

The bulk of my quadcopter’s frame is 3 mm thick. I laid out the side plates and four arms in OpenSCAD, loaded them into Carbide Create, and had a go at cutting them!

I believe they were running at a feed rate of 16 inches per minute with a glacially slow plunge rate. Watching the machine retract 10 mm above the carbon fiber at that plunge speed for every move wasn’t fun. I’ve bumped up the plunge rate without trouble, but I don’t think I’ve found the place to limit the retract height in Carbide Create yet.

This cut went reasonably well. I added tabs to the parts to keep them in place during the cutting process, but my guesses at tab widths and heights were terrible. The ends of the side plates came loose while drilling out the grommet holes, and the arms came completely loose before the holes were drilled.

I got enough parts out to test fit my side plates to the bottom plate, but the arms were completely unusable.

Learning from my mistakes

For the next attempt, I broke each job up into two different tool paths. The first path drilled all the holes and cut out any internal voids in the parts. The second tool path carved the arms and side plates out of the sheet of carbon fiber.

This went much better, but I had new problems to deal with!

What were the new problems?

I imagine my problems were exacerbated by my increase to a cutting rate of 800 mm per minute. That’s approximately double my initial cutting rate! Two bad things happened, but I’m not sure which happened first.

On my very first cut, I used some Nitto double-side tape to hold the 1 mm sheet of carbon fiber to the wasteboard. All my carbon fiber sheets have the same length and width, so I used three screws and washers to hold the corners down. This worked well on the cuts into 1 mm and 2 mm carbon fiber.

At the higher speeds, the 3 mm carbon fiber sheet managed to work its way loose, and it was moving back and forth on the Z-axis!

Not only that, but my router was wobbling around!

I thought I was imagining it, but it sure was moving around. One of the pulleys holding the router to the X-axis had worked its way loose!

Recovering from the setback

I canceled the job, and I jogged the router upward by a few inches. I tightened the pulley, and I secured my carbon fiber sheet with a fourth screw and washer.

If I had been using my 3D printer, I would have scrapped the parts and started over. This isn’t a 3D printer, though! 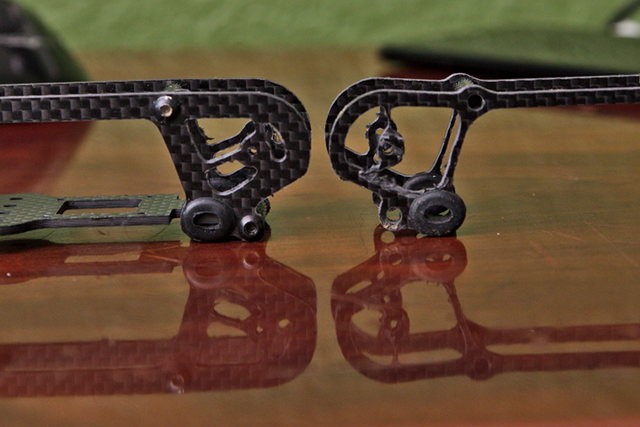 I simply restarted the job. The machine wasted some time cutting into areas it had already visited on the first attempt, but that was OK. I didn’t have to waste $10 worth of carbon fiber on a failure.

The cuts weren’t perfect. The struts around my quadcopter’s camera mount are a little messed up, but they’re perfectly usable!

It is a good thing I ordered two 0.0625” endmills when I bought my Shapeoko! While cutting the perimeter of one of my quadcopter’s arms, my endmill broke!

I’m pretty sure that at any reasonable cutting speed, my Dewalt router spins at a higher RPM than necessary, so I don’t think that was the problem.

I already know how to recover from a failure. I canceled the job, and I jogged the router up about two inches above my work surface. Thank goodness I had one more bit to use! 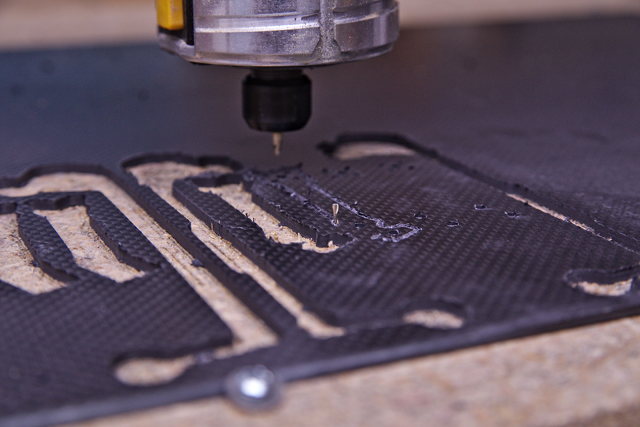 But that’s all I had. I’d have been set back quite a few days if I broke this one.

The holes were all drilled, so I disabled that part of the job. I lowered the cutting speed to 500 mm per minute, decreased my cutting depth from 0.4 mm to 0.3 mm, and I exported the gcode again. I also turned up the speed of the router a couple of notches. As I said before, I doubt the router was spinning too slowly. If anything, it is always spinning too fast for carbon fiber. At that point, I’d prefer to melt some epoxy and have rougher edges than have to wait a few days for a new endmill!

Less than an hour later, I had all the parts I needed to assemble my prototype quadcopter!

Amazingly, the quadcopter flies great. I’ve made quite a few tweaks to the design. They’ll make the frame quite a bit better, but they’re not required for me to begin testing. I think I’ve had a tremendous success!

Upcoming improvements to my process

The Internet tells me that I should be using fishtail endmills when cutting carbon fiber. Carbide 3D’s wiki pointed me towards a set of 0.0625” fishtail endmills on eBay. I was able to buy a pack of 10 for about $23. That’s what I paid for a single bit from Carbide 3D. 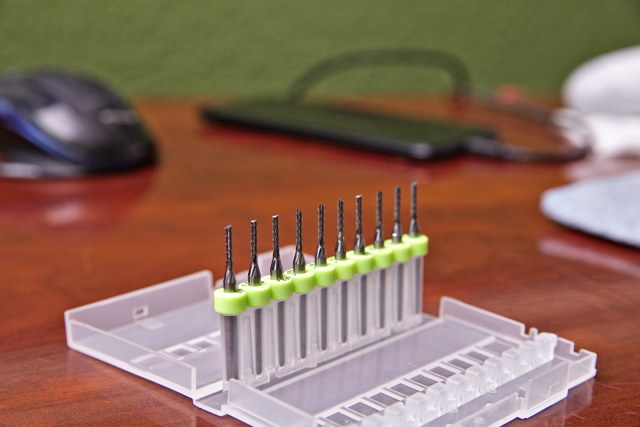 I’ve installed one on my router, but I haven’t had a chance to test it yet. As long as it works about as well as the Carbide 3D bit, I will be pleased. I have a feeling it will be at least a small upgrade when cutting carbon fiber, though.

I need to work on dust collection, and I really should build some sort of enclosure if I’m going to be cutting carbon fiber often.

My Shapeoko has been a lot of fun so far, and a lot less intimidating than I expected! Cutting carbon fiber was less of a challenge than I expected, and I’m looking forward to cutting the next revision of my prototype quadcopter frame!

I’m not sure what my next project is going to be, but I have a few ideas lined up. My friends and I are talking about designing a bartop arcade cabinet, and I need to design some sort of SWAG for Patreon. The latter should be a quick and easy project, so that will probably be up next.

Do you have a hobby-grade CNC router? Are you cutting quadcopter frames out of carbon fiber? Have I done a good job at my first attempt? Do you have any questions? Leave a comment below, or stop by [our Discord server][bw] to chat with me about it!