I happened to watch Thomas Sanladerer’s video about designing a replacement part for his MPCNC build. I can’t stop thinking about it.

This situation is fascinating to me. A lot of the discussion floating around the Internet about this seems to involve the motives of one or both parties. That’s interesting, too, but I want to steer clear of that side of things.

I have my own open-source hardware designs. I’ve thought about having some of them manufactured. I’ve put a bit of thought into the licensing, and what that licensing protects me from and allows end users to do. I’ve also put some thought into the viability of marketing my potential products.

Your copyright and license protect your design, but not your hardware

If you’re Apple or Ferrari, this isn’t quite the truth. They have huge budgets and top-notch legal teams.

You, me, Thomas Sanladerer, and Ryan at V1 Engineering don’t have this luxury. I doubt any of us could afford to fight in court over these minor details. For us, the copyright protects our designs but not the hardware.

If I feel that the shape of the fuselage of my Kestrel is an important part of my marketing, I had better have filed for a trademark. If you decide to cut something similar, I won’t have the power to stop you.

Even if you are cutting the carbon fiber using my open-source CAD files, I don’t believe I would be able to stop you from selling what you have manufactured. I don’t believe that the copyright of my CAD files could be applied to the product that’s been cut by your CNC machine.

You don’t need our CAD files to copy our designs

With my quadcopter frames, all you need to do is buy one frame and drop the physical parts onto a flatbed scanner. You don’t need my design files at all. 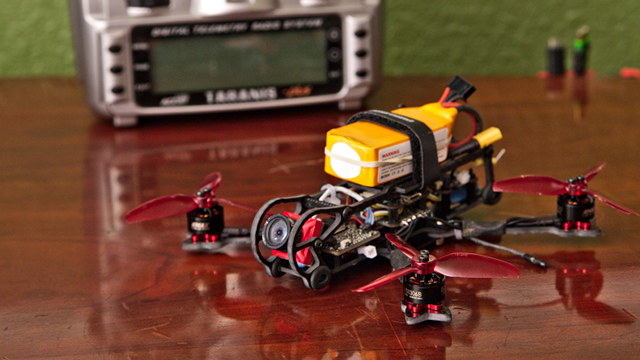 Even if you did need to redesign the parts manually, that isn’t a gargantuan task. If Thomas Sanladerer can create a parametric part that is compatible with the MPCNC in a few hours, then maybe the design isn’t really all that valuable.

We aren’t entitled to profits

I would love to have my breadboard vise manufactured. It is a 5-hour 3D-printing job, so to sell them, I have to charge quite a lot for 25 cents worth of plastic. You shouldn’t buy one from me. You should print your own!

I’m excited about my 5” freestyle miniquad frame, but I don’t think I’ll try to have it manufactured. Sure, it is precisely the frame that I want to fly, but it just uses my favorite ideas from a bunch of existing frames. You should just buy one of those.

I think my 3” Kestrel frame is unique enough, but I don’t think the market is big enough to justify the effort and investment of acquiring inventory. I’ve seen how big the third largest FPV quadcopter store in America is, and it isn’t big at all. Micro quads are currently a niche within a niche, and I’ve heard a bit about the volume of electronics being sold for custom 3” builds, and it seems to be quite low.

Even if I had locked up all this intellectual property of mine as tightly as I could, I don’t think I’d be making any serious money with any of this stuff.

You aren’t entitled to our designs

I think everyone is already aware of this, but I still think it is important to bring it up.

When I started my journey into the world of CNC, I quickly learned how much different the CNC community is compared to the 3D printing community. Open-source is everywhere in the 3D printing world; most of the best slicers, models, and 3D printer designs are open-source.

This was my first attempt at cutting aluminum on my #Shapeoko XXL. It was much more successful than I expected! I'll do a better job next time. #cnc #cncmachining #cncrouter #make #making

Open source CAM software for CNC machines is light-years behind open source slicers. When you search for beginner CNC projects, half the search results are people asking how to make money with their machine. The landscape is just so very different!

Twenty years ago, everyone was stealing copies of Microsoft Office and Windows. Microsoft had no interest in stopping you. Every home user of Office was another advocate for the use of Office at the workplace, and businesses did pay. It was only in recent history that Microsoft really started clamping down on this sort of piracy.

The Arduino is another example. You can buy a genuine Arduino Uno for $22 plus shipping. You can buy a more advanced Arduino Leonardo clone with free 2-day shipping from Amazon for $9.99. You can order similar boards straight from China for half that price.

There are plenty of people willing to pay the extra $12 to $15 to support the original. The people that buy the clones for $5 to $10 are still helping to grow the size of the Arduino ecosystem. Everyone wins.

Would Arduino be making more money if they didn’t open-source their design and software, and if they kept the cloning at bay? The number of projects using an Arduino would be smaller, for sure. Maybe they’d be doing OK, but I doubt it.

Open-source hardware can reassure your customers

I’m just a guy cutting carbon fiber in his garage. If I do decide to have my Kestrel frames manufactured for me, and you decide to fly my frame, how do you know replacement parts will be available a year from now? My product may be a flop, and I can never have a second batch produced. Maybe I’ll go bankrupt. Maybe I’ll get hit by a bus. Anything can happen.

I want my customers to know that they can produce their own replacement parts if need be. If I go bankrupt, maybe another company will step in to fill the void. Maybe my customers could have a friend cut some carbon fiber for them. Maybe they’ll order parts from CNC Madness using my CAD files.

The Arduino enjoys a similar advantage.

What about the MPCNC?

I like the MPCNC project, but it isn’t for me. If V1 Engineering had an account at Patreon, I would subscribe without hesitation, but I have no interest in buying their product or building this machine.

The kit looks tempting at only $275. The recommended spindles are much smaller than what I run on my Shapeoko. The two recommendations are priced at either $53 or $109 at Amazon. You’ll need to source $12 worth of conduit, and you’ll need to run about $30 worth of filament through your 3D printer.

V1 Engineering sells the 3D-printed parts for $135, and I think that’s a great value. The time and effort to print your own parts isn’t inconsequential, not to mention the potential reprinting of failed parts. I would definitely spend the extra $100 or so to have that work done for me.

That’s under $550 for a machine that is roughly comparable in size to a $1,680 Shapeoko XL. I’d even be willing to bet that the MPCNC could handle almost every cutting job I’ve attempted on my Shapeoko XXL.

That said, the MPCNC won’t begin to approach the rigidity or power of my Shapeoko XXL. They’re different machines for different jobs at different price points.

The STL files for the MPCNC are licensed under the Creative Commons Attribution-NonCommercial-ShareAlike 4.0 International License. As with many open-source licenses, this means that any changes you make to these STL files must also be released under the same license. You’re also not allowed to profit from the sale of those STL files.

Whether you’re allowed to sell the parts you print using the STL files could probably be argued either way. I don’t really want to touch on that part of the discussion.

I don’t know how this is being handled today, but I could see this creating a schism at some point in the future.

I hope I wasn’t too hard or too easy on either Ryan at V1 Engineering or Thomas Sanladerer. I wanted to explain the research I’ve done and the thoughts I’ve had regarding open-source hardware over the four years since I published my breadboard vise to Thingiverse.

What do you think? Do you prefer to use open source hardware? Have you published any of your open hardware projects to the world? Do you have a project I should know about? Let me know in the comments, or stop by the Butter, What?! Discord server to chat with me about it!