The physical aspects of this upgrade project have been finished for quite a while now. This write up has just been on hold waiting for me to borrow a better camera than the one in my old Samsung Galaxy S phone.

Not much has really been done since my last update aside from the PVC pipe that is now hiding the wires. For that, I just took a length of ¾” PVC pipe that I already had and slit it right down the middle using a friend’s table saw.

Here is a collection of photos progressing from the earliest stages of the build right up to the present: 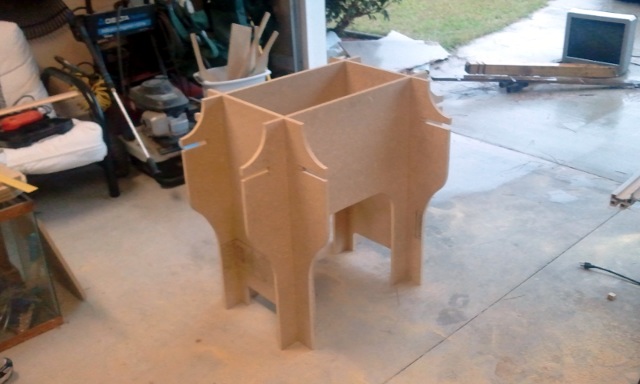 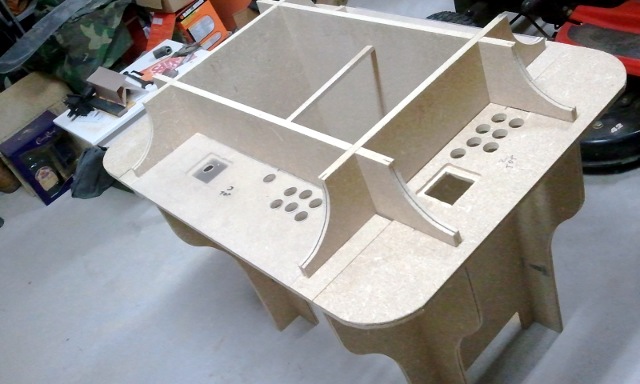 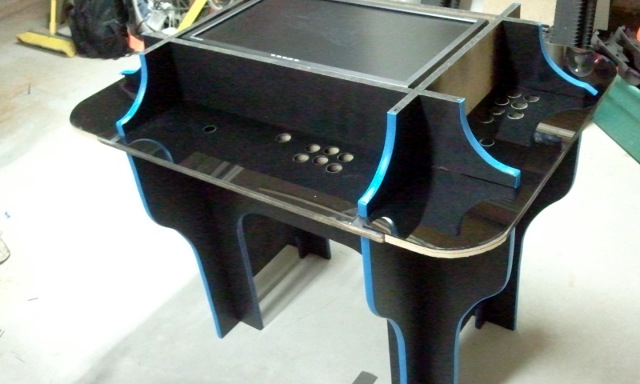 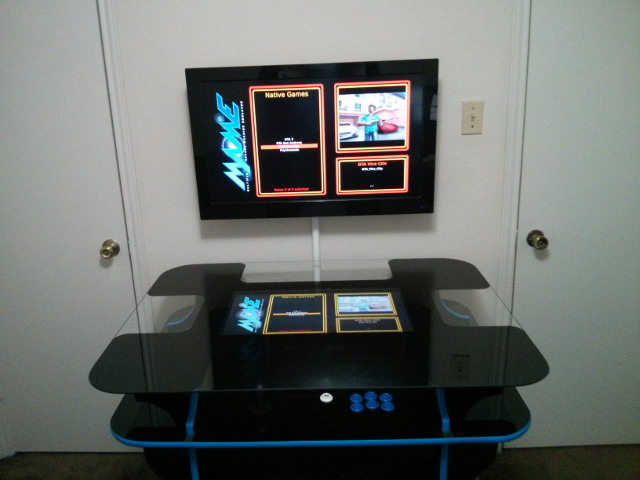 This is most definitely cheating

I don’t know if I should be allowed to call this thing an arcade cabinet anymore, but I am very happy with the results! I would have never thought to hang a TV on the wall behind my arcade cabinet in my previous home office: the layout of the room was all wrong.

Why not just build an upright arcade cabinet?

This whole project originally started because I was in need of some sort of table for my office. I could have just bought a cheap table or desk from Ikea. We most certainly could have built our own basic table out of wood, but I’ve always wanted my own arcade machine.

This ended up meeting both of my needs and it even gave me a place to hide my home file server. A purpose-built NAS box would probably be more power efficient, but now I have a ton of extra space to add more drives! 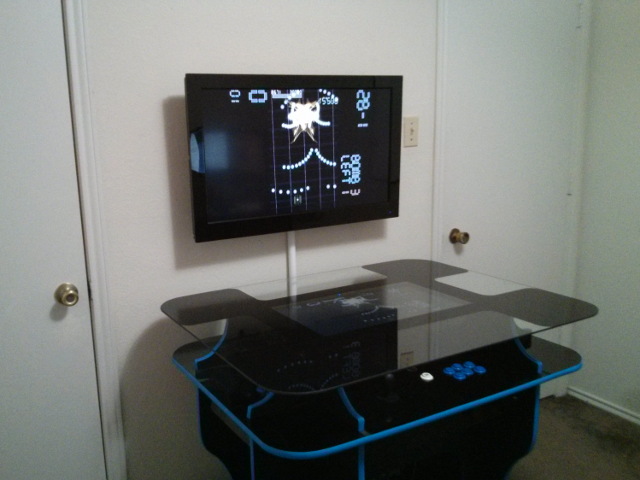 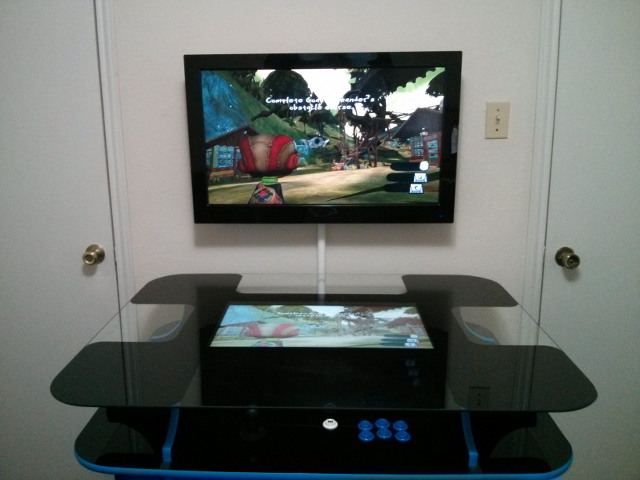 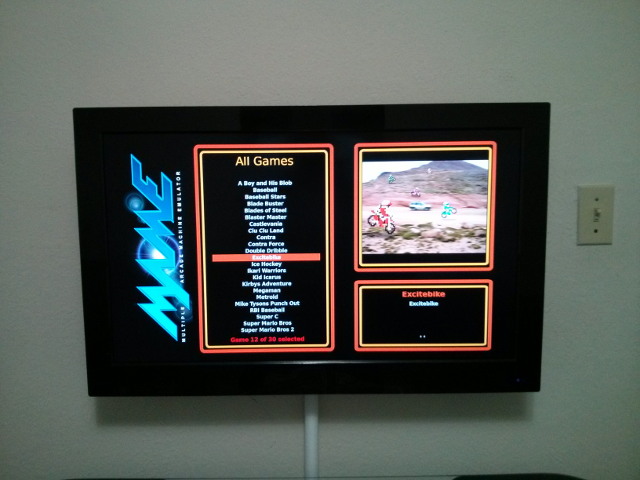 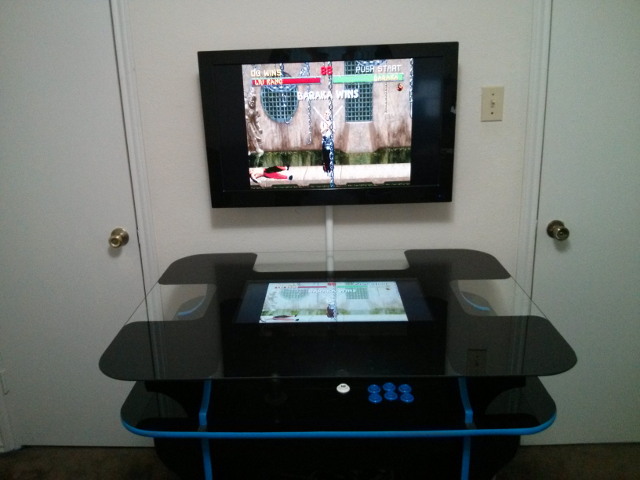 Now I have a screen that you can see while sitting comfortably on the other side of the room. I can watch movies and television in my office now. I had my BluRay copy of Super Troopers playing on there in the background while I was setting things up.

I can also play games from across the room using a gamepad. It would feel a little silly playing Super Mario Bros. on a television connected to an arcade cabinet, though. That would almost fit into a “yo dawg” meme…

I started looking through my older Humble Bundles for games that require analog gamepads. So far I have only installed Psychonauts on the arcade cabinet, and it definitely feels like it was made to be played with an analog gamepad. Shank was previously a failure: my arcade cabinet just didn’t have quite enough buttons. Shank and Shank 2 both exist on the Playstation 3, so I’ll bet there’s enough buttons for either on a gamepad.

I bought the full Grand Theft Auto collection a couple of years ago on Steam. I have GTA 3, GTA Vice City, and GTA San Andreas all up and running at 1080p, and they look so much better than they ever did on the PlayStation 2. I tried to get Grand Theft Auto 4 up and running, but it ran like a slide show. I’m not sure if my CPU is just too underpowered for the game, or if it just runs poorly under Wine.

I also installed PCSX2, a PlayStation 2 emulator, and I ripped a few of my games. Chris was excited about the possibility of playing her Final Fantasy X at 1080p with antialiasing. Unfortunately, my arcade cabinet’s CPU just isn’t fast enough. The best it could muster was 35 frames per second, which is a bit better than half speed. It was about the same speed at 1920x1080 and 640x480, so my graphics card is probably not the bottleneck.

I think this was a solid, inexpensive upgrade for both the arcade cabinet and my office. I don’t expect to watch many movies in here, but it is nice to have the option.