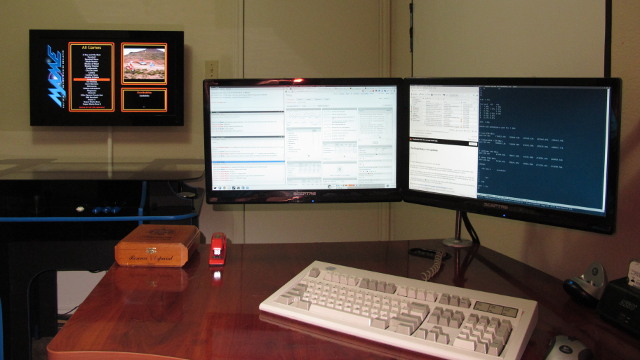 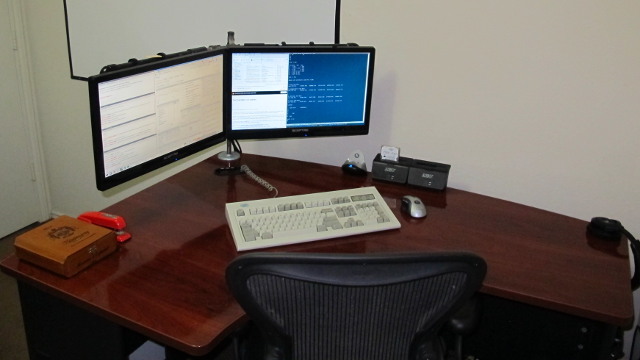 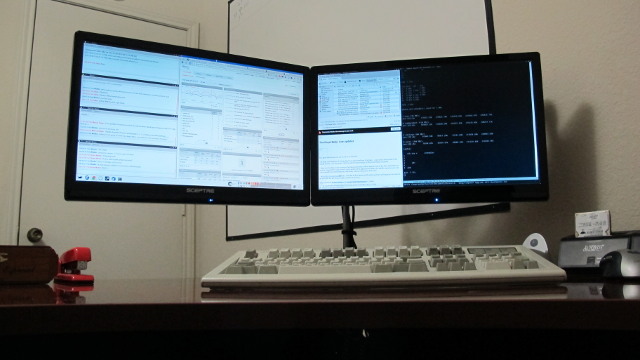 I’ve been using this desk for a long time, probably since around 2006. It isn’t made of proper wood, but it is quite heavy-duty. The three legs are 1” sheets of laminated particle board, and the surface is a heavy, 1”-thick slab of laminated MDF. My desk is quite large, and it doesn’t fit through doorways when fully assembled.

The desk is roughly 60” wide by 44” deep. It is big enough that I can just rotate my chair to the right if I need to work with my laptop, and back to the left to use my desktop. I often tend to primarily focus on one monitor at a time, but the primary display changes depending on what I am doing. I’m pretty fluid in this regard, but I do almost all of my text editing and gaming on the right-hand monitor.

When I switch my focus from one monitor to the other, I rotate my chair and move the keyboard over so it is centered on that display. It is more comfortable to keep your neck straight most of the time.

I upgraded the desk’s grommet by adding a powered USB hub and some power outlets. I use the USB hub to charge my phone, and it comes in handy for flash drives and USB hard drives. The power outlets are plugged into my UPS, and they come in handy all the time.

The surface of the desk is very smooth, so I don’t need to use a mouse pad. It has taken a bit of a beating over the last half-dozen years, so there are some scratches and dings.

It is shaped to fit in a corner, but I have it in the wrong corner. It made sense to rearrange things in here a bit after I connected a wall-mounted LCD TV to my arcade cabinet. I can now easily see both of my monitors and the TV from where I’m sitting.

I built this monitor stand three years ago. The use of PVC combined with steel pipe is pretty unique, and not without its problems. The initial design ended up being a failure, and I ended up wandering around Lowes trying to come up with a way to salvage the design.

It turned out that the screw holes in ¾” PVC j-hooks match up perfectly with VESA mounting points. The rest of the design fell into place from there. I didn’t end up having to glue any of the PVC; friction was enough to hold it in place. I only had to tweak it once every few months, but that wasn’t really much of a problem.

That is, until my new friend Harley showed up. He likes to attack mouse pointers, rub up against the monitors, and shimmy his way underneath them. He doesn’t mess them up as often as he used to, but I still have to straighten things out every few weeks.

I’m very happy with the way the steel pipe flange bolts so solidly to the desk. I’d like to keep that and upgrade the rest of the mount using unistrut, but I’m going to put that off until my next monitor upgrade.

The keyboard is an IBM Model M PS/2 keyboard. This particular one happens to have been born in 1993. I have some plans for this keyboard. I’d like to at least replace the old, coiled cable with a nice fabric-jacketed cable. I also miss the volume control knob on my old Bluetooth keyboard. I might try to add a nice analog volume knob using an Arduino.

For now, though, I’m just happy to be using a mechanical keyboard again.

I just recently built a new Linux workstation to replace my aging laptop. It is an AMD FX-8350 with 32 GB of RAM, 128 GB Crucial M4 SSD, and an older, power-hungry NVidia GTX 460 video card. I am also mirroring a pair of 7200 RPM 1 TB that I had lying around; they are an excellent replacement for the second 500 GB drive that was in my laptop.

The video card might seem a little outdated and out of place in this machine, but it is more than fast enough to meet my needs. It is at least 10 times faster than the NVidia GT 230M that was in my laptop, and it runs nearly every game I play at well over 100 frames per second with all the settings maxed out. I won’t bother upgrading it until I want to play a game that won’t run smoothly.

I’m using a Monoprice gaming headset. They’re one of the few gaming headsets that not only have a removable microphone, but the microphone isn’t obnoxiously huge. They also happen to be just big enough for my over sized cranium, which is a nice bonus. They’re also solid black and very plain looking, which is exactly what I was hoping to find.

They’re the only set of huge, closed, monitor-style headphones that I’ve ever owned, so I’m not sure how useful my opinion is. They’re comfortable enough that I don’t mind wearing them for an hour or more at a time. They sound pretty good to me, and they’re louder than I’d ever need. They also happen to be reasonably priced, which certainly doesn’t hurt.

I love my Aeron chair. I’ve only had it for about four years so far, and I really wish I’d bought one sooner. Everyone should invest in a quality office chair. I should have bought an Aeron at least ten years ago. I would still have it today, and it would still be under warranty.

The three Aeron chairs that I’ve bought are all used or refurbished. One of them was manufactured in 1997. That one has a very slight wobble to it, but is otherwise in very good shape. Computer hardware becomes outdated pretty quickly. Quality office furniture lasts much longer, and is worth investing in sooner rather than later.

I’ve had this UPS for over a decade. I bought it used off of eBay shortly after I moved to Irving, TX in 2001. We used to get a lot of brownouts that would cause my computer to reboot, and a UPS was a good fix for that. My APC 650 is on its third or fourth replacement battery, and I won’t be surprised if it is still running in ten more years.

The cocktail arcade cabinet and television 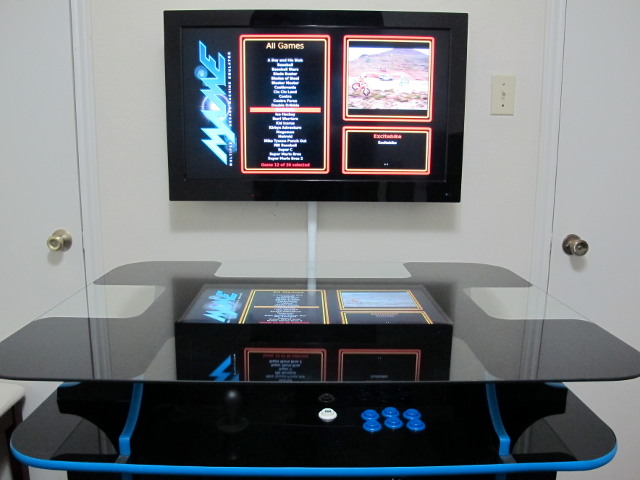 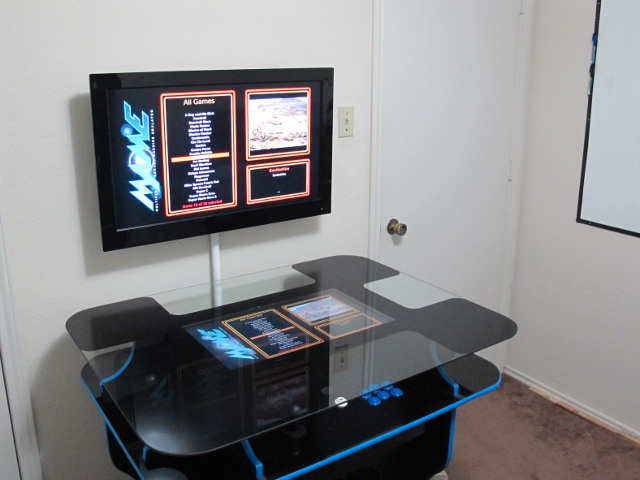 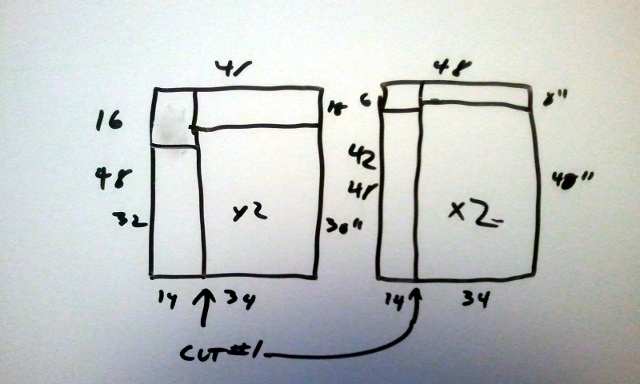 The arcade cabinet is one of my favorite pieces of hardware in my office. My brother-in-law John and I probably spent nearly 100 hours building it, and we’re both very proud of how it turned out.

It is not just a fun machine for playing classic video games. It is also has room for seven hard drives, so I used it as my home file server. I also started using it as a media player now that it has a wall-mounted TV connected to it.

I’ve already written many thousands of words about the build process. Here are some useful entry points into that series of articles:

I love whiteboards, and I am a big fan of using melamine sheets as inexpensive whiteboard material. My previous home office had 84 square feet of whiteboard. The layout of my current home office just didn’t have room for all three of my old whiteboards because the arcade cabinet and desk both block quite a bit of wall space. 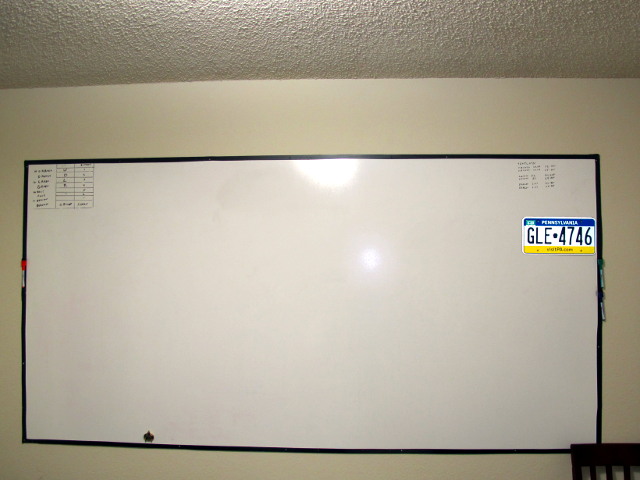 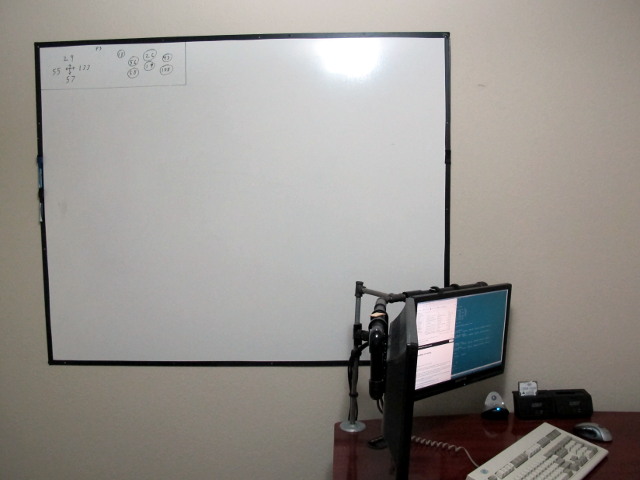 I now have one 4’ by 8’ and one 4’ by 5’ whiteboard, and that is still quite a lot of square footage. The nice thing about having a lot of whiteboard space is that you don’t have to erase things as often. I bet we spent the better part of a year drawing out all sorts of arcade cabinet designs before it evolved into what we actually built. There were often at least two generations of design on the walls at any given time, and it was nice to have enough space to draw a life size diagram of the tabletop and controls.