My friend Brian decided that he wants to build his own arcade cabinet. He’s been poking around on Craigslist for a couple of weeks trying to find a decent shell to rebuild. He finally found one that he liked, so we pulled the seats out of my minivan and drove to Arlington to pick it up. 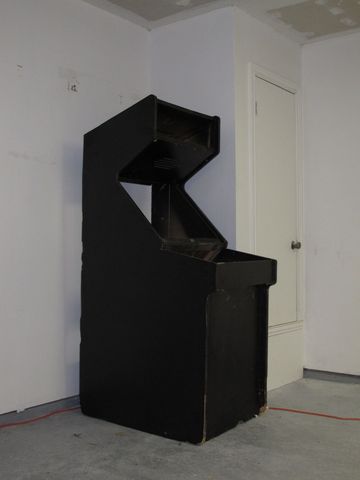 I think he did alright. The cabinet was already in such a state that we had absolutely no idea what game it used to be. In fact, we thought that it might have started life as a scratch built MAME cabinet.

We were wrong about that. Going by the shape and dimensions of the cabinet, and the original holes on the underside of the control panel, we are pretty certain that it is a Main Event cabinet. It is already so far gone from its original state that we don’t have any reservations about cutting into it and converting it to a MAME cabinet.

I’m pretty excited. It has been quite a few years since I finished up my own arcade cabinet build, and I haven’t had the opportunity to work on anything like this since. I think it is going to be a lot of fun helping to bring this cabinet to life!