Late last year, I went shopping with my friend Brian to help him pick out a mechanical keyboard. We tried our local Fry’s, but they didn’t have a very good selection, so we hopped on 75 and drove down to Microcenter. They had a much better selection. We got to try out keyboards with almost every variety of Cherry switch, except the Cherry MX Clear switches, and even one keyboard with ALPS switches.

Brian didn’t end up taking home a keyboard that day, but he did decide which Cherry switches he preferred. He did some more research, thought about it for a few days, and he ended up ordering a nice keyboard with Cherry MX Black switches. 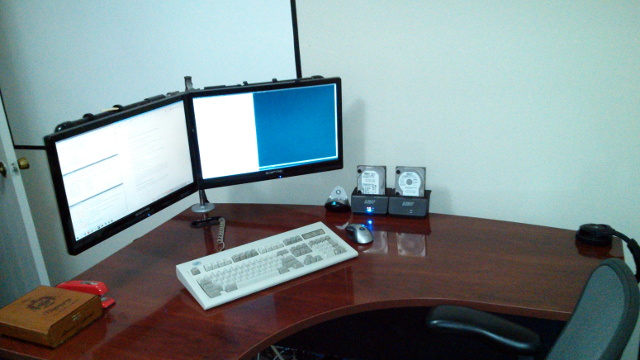 Shopping for mechanical keyboards, and trying out Brian’s new keyboard had me really missing my old IBM Model M keyboard. The blue switches from Cherry are supposed to feel pretty similar to the buckling spring switches in the Model M, but they are supposed to be a little less stiff and a lot quieter.

They are certainly quieter, but I thought they felt absolutely terrible. The buckling springs just feels so much smoother. The transition at the mid-point of the key press on the Cherry MX Blue switches feels really awful. They just feel way too crunchy.

I used my Model M for nearly a decade, right up until around 2006 when I retired my last desktop computer. I certainly missed it, but it was much simpler using a laptop at two different desks without having to dock it at two sets of keyboards and monitors.

Things changed a bit when I bought my current laptop. This laptop spends most of its time connected to a keyboard, mouse, and two monitors. I actually use my old Model M keyboard with this laptop for the first week. The cheap PS/2 to USB dongle that I had wasn’t up to the task, though. I’d see the keyboard LEDs flash every so often when the dongle reset itself, and some important Emacs key combinations just weren’t possible.

It was a terrible keyboard. Just like all rubber dome keyboards, it felt pretty darn sloppy. Its space bar was also extremely loud; even louder than the Model M. I can’t believe I used it for three years. On the up side, at least it looked nice not having any wires on my desk.

I’m pretty sure the keyboard Chris is using right now is my old Model M. I was tempted to take it back for continuity’s sake, but I’d hate to steal her keyboard. Instead, I am using my spare Model M, and it isn’t perfect. The cord has a tear in the jacket, it has two wrong key caps, and one key cap is completely missing. 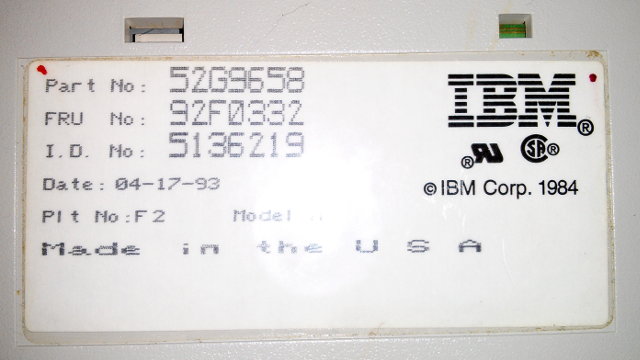 I saw three Model M keyboards when I was visiting my parents, so replacement key caps aren’t too far away. I’m thinking that I’d like to lop off the cord, stick the USB dongle inside the keyboard, and convert this Model M to USB. Then I could buy or make a nice cloth jacketed cable for it. 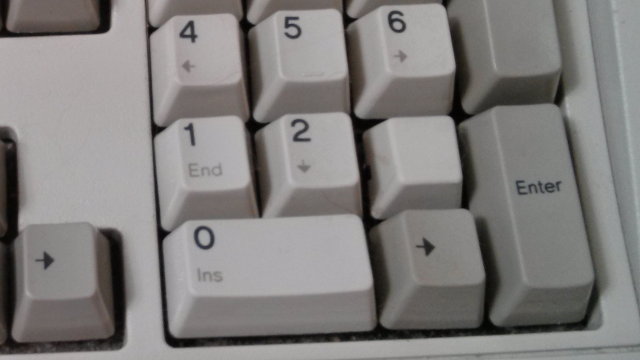 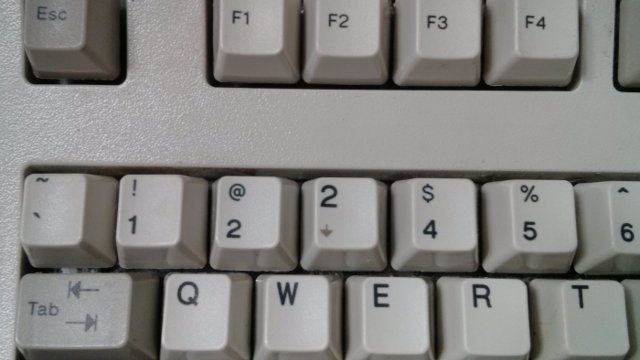 Speaking of USB dongles, I ended up buying the big, beefy dongle recommended by ClickyKeyboards.com. It is quite gigantor, but it is doing a splendid job. The keyboard hasn’t reset once, and every useful key combination that I can think to try has worked. I couldn’t ask for anything more.

I keep talking about building a wireless Model M keyboard, but I just haven’t had enough gumption to take on the project. It turns out that the controller from a particular Logitech wireless keyboard for the Wii has a matrix that almost perfectly matches the matrix in the Model M! The only mismatch is the slash and asterisk on the number pad; they are transposed. I could certainly live with that.

I saw this hack in a forum post somewhere, but I can’t seem to find it anywhere. It even had diagrams showing the layout of the matrices of both keyboards.

The thing that has been holding me back is the lack of availability of the correct Logitech keyboard. It hasn’t been manufactured in years, and it is pretty hard to find. Especially at a reasonable price.

At the moment, I am just thrilled to be typing this on a proper keyboard. 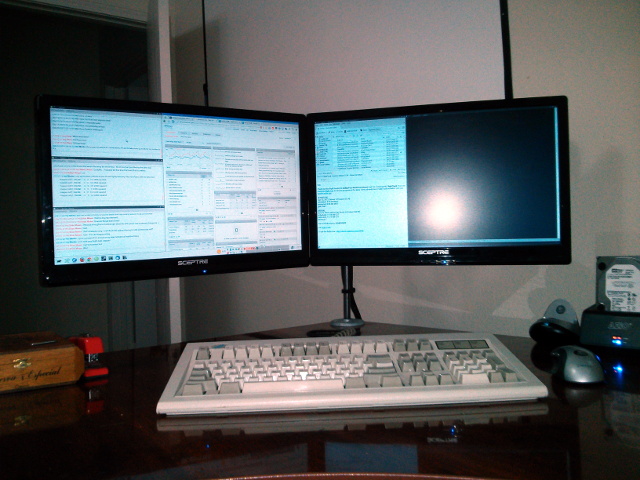