I just had the displeasure of ordering four SATA hard drives. They’re going to find a home in a 1U server that I’m planning to purchase in the next couple of weeks. I ordered the hard drives early because I need one or two large, empty drives so I can make some major partitioning changes to my home file server.

I had some simple requirements for the drives in this new server. They had to be large, reasonably fast, RAID friendly, and they needed to fit in the 1U chassis. It would have been nice to be able to use some server-grade 10K or 15K RPM disks, but they just don’t have the capacity I need, and they are a quite a bit more expensive. The best fit for this server are 2 TB or 3 TB 7200 RPM desktop drives.

In the distant past

In the latter days of IDE hard drives, I almost exclusively used drives manufactured by Western Digital. I had reasonable luck with them, and their RMA process was very convenient. They didn’t make you jump through hoops to prove that you had a bad drive, and they would cross ship your replacement drive for free.

I once had a drive in my home desktop machine’s RAID 5 fail, and I picked up a Maxtor 160 GB IDE drive as an emergency replacement. The drive worked fine for a few months, but then it started dropping out of the RAID due to read and write errors.

Maxtor wouldn’t RMA the drive unless I ran their diagnostic software. Since the drive was plugged into a 3ware RAID controller, their software couldn’t see the drive. I had to move it to one of the motherboard’s IDE ports. Their software miraculously claimed to have fixed the drive. I had to repeat this process three more times over the next several months before it finally admitted the drive was bad. This made me really start to appreciate Western Digital’s RMA policy.

Early Western Digital SATA drives were also quite handy, since they had both SATA and IDE power pins. In those days, most power supplies only had one or two SATA port connectors, so this was terribly handy.

I continued to use Western Digital’s SATA drives right up until about three or four years ago. I picked up some of their 1 TB, 7200 RPM hard drives to use in a Linux software RAID 10. Those drives liked to randomly drop out of the RAID due to read timeouts, which seems to still be a common problem with many of Western Digital’s drives.

I replaced those 1 TB Western Digital drives with equivalent models from Seagate, and I’m still using most of those drives today. I did have to RMA one of them, though. The process isn’t quite a slick as Western Digital’s used to be, but it wasn’t insane like Maxtor’s either. Seagate’s drives also came with five-year warranties, which beat Western Digital by two years.

I did buy four Seagate drives today, but I’m not sure I will be buying any more drives from Seagate in the near future. I’m not too enthusiastic about the shorter warranty periods. I have four or five 1 TB Seagate drives in the room with me here, and many of them will still be under warranty after the warranty on these new drives expire. 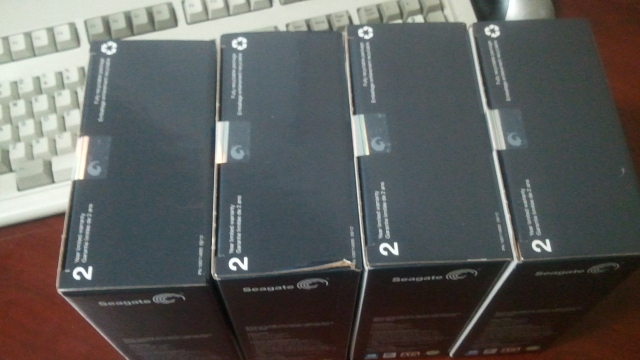 Update: The drives arrived today. If I am decoding the serial numbers correctly, one is the superior 6 head model. The other three are the slower two-platter, four-head model. All four were made in Thailand, and I am pretty sure that is good news.

Update: According to Backblaze’s statistics, Seagate drives may not have been the best choice.