I’m going to be away from home for a few months, and I’ve picked up a few items to make myself a little more comfortable while I’m gone. My laptop battery was dead, so I thought it would be a good idea to replace that before I left.

While I was shopping for a new laptop battery, I also noticed that Amazon has quite a few Bluetooth gamepads that clip onto your cell phone. I’m a huge fan of old-school video games, and I’m going to be spending a lot of time in waiting rooms next month, so I figured I would pick one up.

I usually pack a Wii remote with me when I travel. They’re pretty small, I can use them with my phone, tablet, or laptop, and I always have a spare Wii remote lying around. The Ipega gamepad is a pretty big upgrade over the old Wii remote.

I decided to go with one of the most inexpensive clip on gamepads; the Ipega PG-9017. They’re selling for right around $20, so my expectations really weren’t all that high. The reviews made it sound like it is cheaply made, and it is incompatible with a lot of Android devices.

My biggest worry was the d-pad. The pictures made it look like it had the terrible, round, Xbox-style d-pad. I figured that even if the d-pad ended up being awful, it would still be a huge upgrade over touch controls. 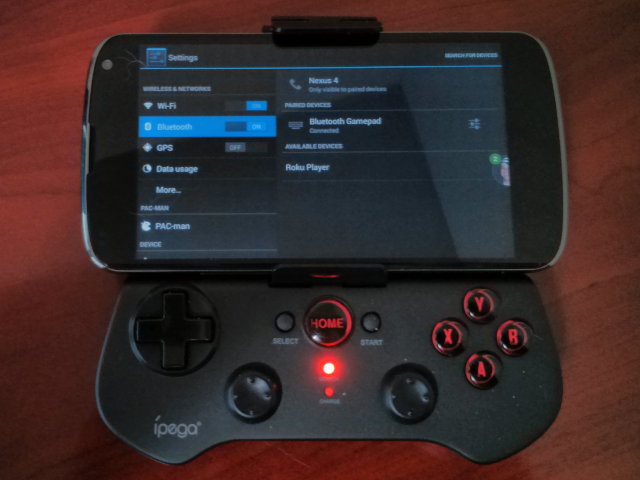 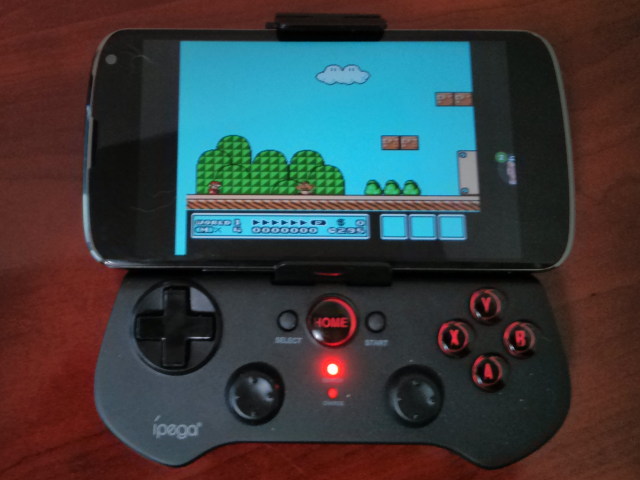 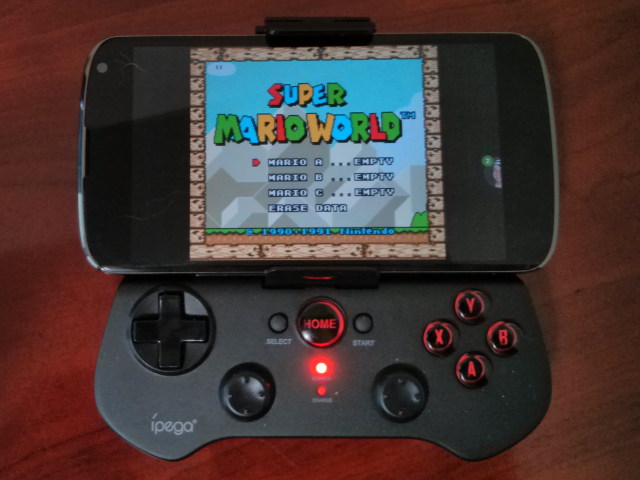 The Ipega PG-9017 is very light, and a lot of people probably assume that means it is shoddy. I don’t think this is necessarily true. I’ve tried bending the controller. When I put this much force on my Sony Sixaxis controller it starts to creak a bit. The Ipega doesn’t make a sound.

The spring-loaded clip surprised me the most. It seems pretty sturdy, and the spring has no trouble holding my Nexus 4. I did not think it would be a good idea to try to see how much flexing the clip could stand up to. It is just a couple of interlocking pieces of plastic, but it is more than enough to get the job done.

There is no noticeable lag, either. I would never be able to play Zanac so well if there were, and I would be missing all sorts of jumps in Super Mario Bros!

The analog sticks are indeed analog. I used them to play a bit of Mario 64 and Starfox 64. They’re a little stiff, and they’re not terribly accurate, but they work well enough for the most part. The shoulder triggers are a bit hard to use, because they’re right up under the phone.

The Bluetooth implementation seems to be broken in a very strange way. I’ve paired it with my laptop, a Nexus 4, a Nexus 7, and a Samsung Galaxy S. It works just fine on all of them. I played a bit of Super Mario Bros. on every device.

Once you turn off the gamepad, it just won’t reconnect. I have to go into the Bluetooth settings on the phone, delete the gamepad, and pair it back up again. This is very annoying.

I don’t know what I changed, but I had it working correctly for a few days. All I had to do was hit the “home” button on the Ipega gamepad, and I could immediately start playing. Then I decided that I should pair it up to the laptop before writing this post. It hasn’t worked correctly again since.

I was really hoping that I could recommend this device. The d-pad feels great. The buttons feel good, even if they’re a bit too tightly spaced for my big hands. The clip works great. This should be an awesome gamepad for any retro gaming fan.

Unfortunately, the Bluetooth pairing issue seems like a showstopper. I already have the controller, so I’m going to just deal with it, but I wouldn’t want to inflict this on anyone else.

I’ve since learned that there is a newer revision of this controller, the Ipega PG-9018. I’d really like to know if the newer model corrects this problem.

Do you have a gamepad for your phone? Which one is it, and how is it working for you?