Update: I’ve had this battery for over 18 months now, and it is still running like a champ.

Update 2: I’ve had this battery for two and a half years. If I’m doing light work, it will still run my laptop for almost four hours. However, if the CPU and GPU are working hard, and I hear the fan working overtime, I’m likely minutes away from randomly losing power. There must be a dying cell in there, because it just can’t supply enough voltage anymore. I’m still pleased with my choice of battery. It got me through a few years, and my laptop is starting to feel pretty ancient now anyway.

The 8-cell battery that came with my HP DV8T laptop has been nearing the end of its life since the beginning of the year. When I was traveling back in March, I was lucky if I could get thirty minutes of use out of it. I can’t get much done in half an hour, but it was more than enough juice to let me move the laptop from one outlet to another.

The battery completely gave out at some point in the last few months. I haven’t been using my laptop all that often since buying my new desktop machine, so I hadn’t given it much thought at all. I’m going to be traveling for a few months, and that seemed like a good reason to pick up a fresh battery.

How do I choose a battery?

There are quite a few choices. The most expensive option is a replacement battery from the laptop manufacturer. This seems like a good idea; the laptop manufacturer is likely to be using high-quality parts in their batteries. The problem is that you don’t know how long those batteries have been sitting on a shelf, and lithium ion batteries deteriorate quite a bit if they’re not cycled regularly.

Then there are really cheap third party replacement batteries. I saw 8-cell batteries for my HP DV8T for as little as $20 shipped. I’ve bought cheap batteries like this before, and the reviews at Amazon seemed to match up pretty closely with my experiences. The ones I bought didn’t have as much capacity as the original battery, and they ended up turning into doorstops within about twelve months.

This worked out just fine for me in the past. Those laptops were nearing the end of their useful life, and I just needed them to limp along until it was time for an upgrade. A battery like that isn’t a good fit for me this time, since I don’t plan on replacing this laptop anytime soon.

There were some more expensive third party batteries at Amazon that come with 18-month warranties. The reviews on these batteries were much better than the $20 batteries, and I figure that if they’re willing to stand behind their product for 18 months, then these batteries should last longer than just a few months. 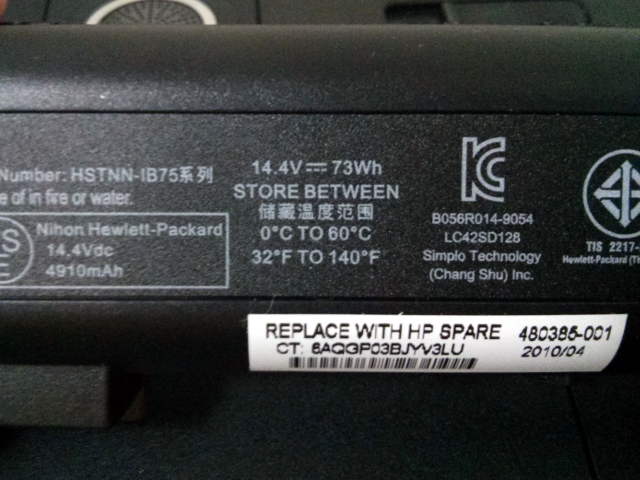 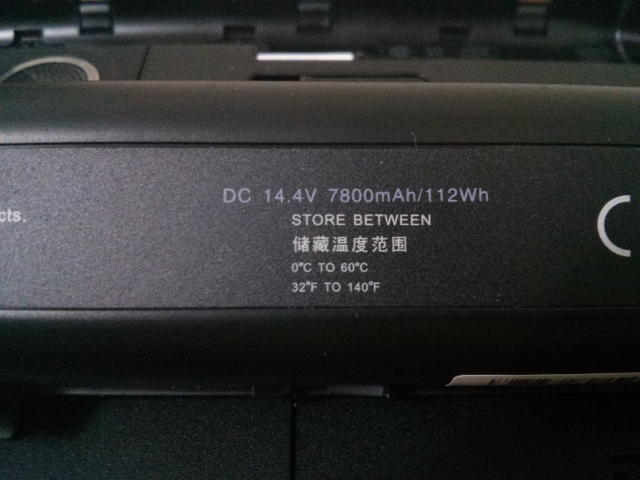 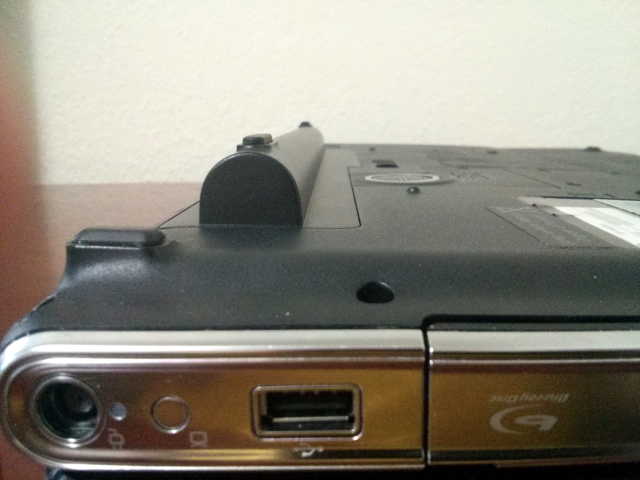 I decided that I was going to buy an LB1 brand “High Performance Battery”. They seem to make batteries for other brands of laptops, like Dell, Asus, and Toshiba. I found an 8-cell battery for $35 and a 12-cell battery for $45 for my HP laptop, both of which were eligible for Amazon Prime.

My laptop is very power hungry, so I just couldn’t resist the upgrade to a 12-cell battery. I’m not worried about the extra weight, since this is already a gargantuan nine-pound laptop anyway. It also seemed like a good value; it only cost me 28% more to get 50% more battery!

The larger battery adds a small bulge that raises the back of the laptop off the desk a bit. I’m sure some people will be happy that this gives the laptop better airflow. I’m not one of those people, but the extra height surely won’t cause me any problems.

The colorful brochure that came with the battery recommended that I fully charge and discharge the battery 2 to 6 times. They obviously don’t know me very well. I would have done this anyway just to see how long it would last!

When I first bought this laptop, and its battery was factory fresh and it still had a solid-state drive, the best I could manage was a bit more than 150 minutes of run-time on a charge. I would have been happy to beat that by anything more than an hour. If we can trust the math, I should be able to hit 225 minutes now.

I wasn’t expecting to do that well, though. I’ve since downgraded the SSD with a 7200 RPM spinner, and I used to have all sorts of power saving tweaks set up. This is just a bone stock Xubuntu 13.10 install now.

I was extremely surprised by this new battery. I charged it up and ran it dry for the first time yesterday. The laptop had all my usual applications up and running. The screen brightness was set to about half, and I left it sitting idle almost the entire time. It took 268 minutes to empty the battery. That’s two hours more than I ever got out of the original battery!

The second discharge cycle didn’t go quite as well; it only ran for 238 minutes. This was entirely my own fault. I threw off the results by running some disk-intensive operations while the battery was draining.

The results were even better on the third discharge cycle. It managed a whopping 282 minutes. It was good to see that the first discharge wasn’t a fluke.

Things are a bit less scientific this time. I’m traveling, and I don’t have my desktop with me, and it isn’t easy to leave my only available computer alone for four solid hours. Even so, I’m not having any trouble breaking the four-hour mark. I’m going to say that the battery is still working just fine.

I am noticing a small physical problem with this 12-cell battery. The larger battery raises the back of the laptop off the desk, and the battery is off center. I can see the screen shaking around a bit while I type. I’m sure that there’s more to blame than just the battery. I am not terribly gentle with the keyboard, and this old particle-board desk from the eighties isn’t nearly as stable as it once was.

The battery is still doing quite well after 18 months. I just ran the laptop from a full charge, and it kept running for 259 minutes. This fits in well with the numbers I was getting when the battery was new. I definitely made the right choice.

Will the battery still be good in three years?

It is too soon to tell, but I have a lot of confidence in this battery now. The label on the new battery says that it has 50% more capacity than my original battery, while it is able to power my laptop about 70% longer. I think that’s a very good sign, but I’ll only know for sure with time.

Are you using a third-party replacement battery in your laptop? How is it working out for you?