I am cheating a bit this time. I haven’t even played Voxatron on my arcade cabinet yet because the replacement power supply hasn’t arrived yet. The Humble Voxatron Debut will only be running for about two weeks, so I figured I should write about it sooner rather than later! 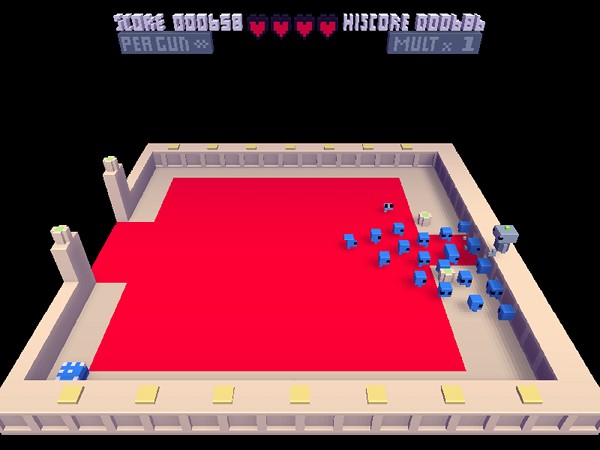 Voxatron maps very easily to the arcade controls. It uses the arrow keys for movement, z to jump, and x to shoot. The only other keys that need to be mapped will be enter and escape, for moving around the menus.

Voxatron is a neat little 3D platform shooter. It feels a bit like Robotron with the addition of jumping. I’ve only played through a few levels, so I haven’t seen much of the game yet. I’m (impatiently) waiting to play it with the arcade controls!

The blocky retro-style graphics look awesome. I especially like that the little light guy’s head lights up when he is shooting. Voxatron will definitely be a welcomed addition to the growing collection of modern games on my arcade cabinet.

The cabinet is back up and running and Voxatron looks amazing on there! I was very impatient and ended up playing through the whole “adventure” mode on my laptop long before the replacement parts for the arcade cabinet arrived. I know now that it is much easier to handle the hold-button-to-lock-shooting-direction control setup with the arcade controls than it is with the keyboard!