I’ve been out of town for most of the last four months. One of the first things I did after “docking” my laptop was fire up the arcade cabinet. It booted right up and I was very happy and relieved to see that none of the hard drives had died while I was away.

I scratched my head, walked back over, and turned it back on. This time it shut off about half-way through the boot sequence. I got down on my back and crawled underneath. I felt like I was checking to make sure the oil filter on my DSM was snug (I’d had mine come loose before, the spindle screwed into the oil cooler could be problematic).

While I was looking up into the guts, I hit the power button. Things were pretty dark from that angle, and I didn’t think to bring a flash-light. I touched the CPU fan; it was spinning. I touched the power supply fan… It was not spinning.

At least it is an easy problem, just a dead power supply fan. I’m not surprised that it died; this power supply is probably over four years old by now.

My good friend Brian gave me one of his old video cards: an NVIDIA GeForce GTS 240. This card is a massive upgrade over the arcade cabinet’s current NVidia GeForce 6200LE, and tons more horsepower than I’m going to need. The dead power supply is lacking the 6 pin PCIe power connector required by the new card.

I ordered a new power supply. It should be here in a few of days. I’ll just have to survive without my home file server for a little while. This is so much better than coming home to a dead hard drive, or worse, TWO dead hard drives…

The power supply arrived, but it didn’t fix the problem… It powered up for a minute or two and then shut itself down. I crawled underneath the cabinet again and started poking at things with my finger and noticed that the CPU heat sink was wobbling: 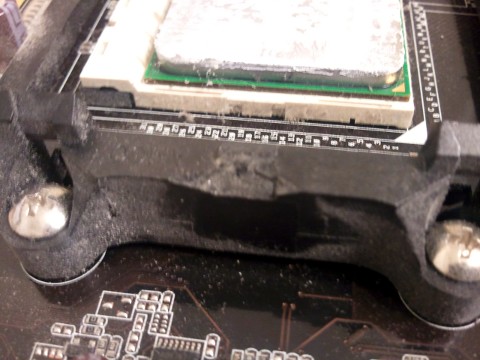 The little nub that holds the heat sink clip snapped off. I ordered a new bracket, so now I get to wait again.

I got to take a look at the old power supply now that it is out of the case. It actually has two fans, but I couldn’t see the second without removing the monitor. I tested it out by shorting pins 15 and 16 to start up the power supply. Both fans started right up.

I clearly remember sticking a “non conductive instrument” (aka a cheap ball point pen). I don’t recall hearing the usual “THWAP, THWAP, THWAP” sound that usually occurs when you do that with a spinning fan. I’m starting to think that I should be questioning my sanity!