I’m a bit bored. I’m sitting here watching my laptop download packages for my slightly early upgrade to Ubuntu 13.04. I figured this was as good a time as any to write about why I run Ubuntu.

I started my Linux journey sometime around 1996 with Slackware 3.0 on my old 40 MHz AMD 386 computer. A few years later, I tried SuSE for a little while. By the end of the decade I had finally found Debian, and I ran it on all my desktops, laptops, and servers.

The servers all ran Debian stable, the desktops and laptops usually ran Testing. As excellent as Debian is, there were problems in both of these cases. 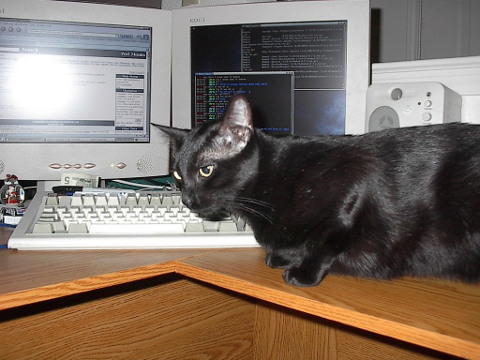 Debian’s release cycle was glacial at the time. Running Debian stable on a server was quite convenient as long as the release was only a year or two old, but it became harder and harder to install more modern software on those servers after that. At that point, you had to either manually upgrade some libraries, or you had to run the testing or unstable branch on your server.

On the desktop, Debian’s stable release was almost always too outdated to use. The unstable branch was regularly broken, and the testing branch didn’t always work either. Sometimes you’d run an apt-get upgrade and be stuck with a partially unusable system.

Debian with a predictable release cycle

Ubuntu showed up in 2004 and gave me a solution to all of these problems. They were taking regular snapshots of Debian’s unstable branch, polishing it up, and releasing it every six months. For me, this solved both of Debian’s problems. I didn’t have to wait three or more years for new stable releases, and I didn’t have to take my chances running a branch that could be broken at any time.

Folks often look surprised when I tell them that I run Ubuntu. When they ask my why I run Ubuntu, I have always said that for my purposes, Ubuntu is Debian with a six-month release schedule. I don’t use Unity, and I don’t really use a full desktop environment, either. I use most of XFCE, but I replace the window manager with Sawfish.

Ubuntu isn’t as Debian as it used to be

My canned response has been getting less accurate over time. Ubuntu has been drifting farther and farther away from Debian with every release. Most people complain about the changes Canonical has been making to the default desktop environment, but I couldn’t care any less about those changes than I already do.

It is the deeper, system-level changes that worry me more, but they haven’t done anything to actually scare me away. Upstart has come close, though.

As far as I’m concerned, this was an excellent upgrade. After the required reboot, almost everything looks exactly the same as it did before—everything but my weather applet, which seems to have switched itself over to the metric system.