Am I excited about the Steam Deck? I’m pretty sure I am! I’m not quite excited enough to order one—gaming on the go just isn’t something I do all that often.

I used to do all of these things, and that has the gears in my brain turning. If you carried a Steam Deck in your laptop bag, what could you do with it besides play games? It is just an x86 laptop. You’re supposed to be able to install Windows on it, so I’m assuming we can boot it from external media.

The Steam Deck is a low-end laptop in a different form factor. It has a smaller screen, built-in gamepads, and lacks the keyboard and mouse. My quick searches say that it costs about the same as most four-core Ryzen laptops with similar specs. Some comparable laptops cost more, some cost less.

I feel like this needs to be near the front of the post. If you’re flying to a new hotel every week doing consulting work, the cost of the gear you carry in your bag probably isn’t your primary concern.

You have a limited amount of space in your carry-on bag. You are probably trying to cram as much functionality in that laptop bag as you can manage. 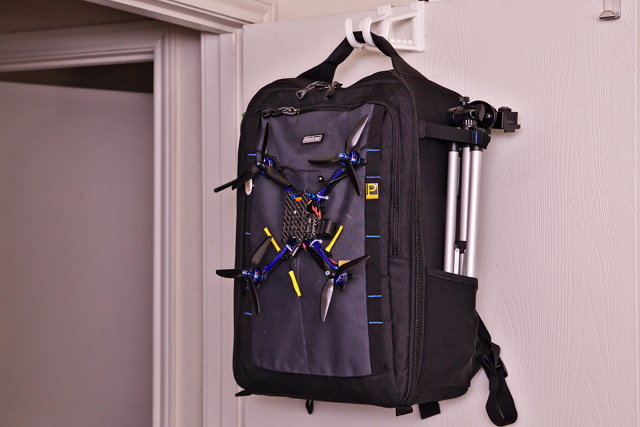 If money is no object, I could try to stuff my laptop, a Steam Deck, a Nintendo Switch, and an extra laptop into my backpack. They may not all fit, or it may get ridiculously heavy, but I can certainly try.

What I’m trying to do here is figure out what roles a Steam Deck in my laptop bag might play. Can it add more value than just gaming? Can it replace hardware I am already carrying today?

The Steam Deck is supposed to work with pretty much any USB-C docking station. There are big, fancy, more expensive docking stations. There are plenty of options under $35, and there are also simple USB-C to HDMI adapters for around $13.

That means it will be easy to plug your Steam Deck into the TV at your hotel. That will let you play local video files directly off the Steam Deck or a thumb drive. You’ll also be able to use Netflix, Hulu, and friends from a web browser.

I’d be excited if this meant I didn’t have to pack a Fire TV stick in my backpack, but the USB-C dock will be roughly the same size and price. I guess the advantage here is that I could use the dock with my laptop as well. You might already be carrying a dock anyway!

Maybe you can leave the laptop at home

This is the idea I am most excited about. The part of the job I am doing right at this moment doesn’t require a lot of hardware. All I need is a screen, a keyboard, and a text editor and I can be writing blogs all day long. The screen doesn’t even have to be that great.

I have an old, cheap Bluetooth keyboard here that isn’t much bigger than my Nintendo Switch. I wouldn’t be surprised if it is smaller than the Steam Deck. I could throw the keyboard and the Steam Deck in my small laptop bag when I take a ride to the park.

I could sit in the shade and play some Dead Cells, then stop at a picnic table and write a blog post.

Maybe this setup is just enough to have with me in an emergency. Having a real Linux box with me to troubleshoot problems would be a step up from just having my Android phone. It wouldn’t be as comfortable to work on as a real laptop, but the only real problem would be comfort.

Boot from a USB SSD or run virtual machines under SteamOS

If this were my Steam Deck, I’d want to avoid messing with the host operating system as much as possible. I’ve been a Linux server guy for more than 20 years, so I’m not afraid to tinker with things, and I expect to be able to reverse any changes I make. I’m assuming SteamOS’s kernel will ship with everything required to run KVM and QEMU.

If you’re new to Linux and worried about breaking your gaming handheld, you might want to boot your alternate configuration from a USB SSD or hard disk.

Why would I want to run virtual machines on my Steam Deck?

This is the first thing that came to mind when I saw that the Steam Deck ships with 16 GB of RAM. How many virtual machines can I cram on this thing, and what should they be doing?!

Maybe you are a C or C++ programmer using distcc, and you would benefit from having four extra cores nearby compiling your code. Maybe you are a 3D artist, and your work would go faster if you could farm out your Blender rendering to your Steam Deck.

I might set my Steam Deck up with Davinci Resolve so it could render YouTube videos for me while I edit the next one on my laptop.

Do these need to live inside virtual machines? Not necessarily, but it would be nice to separate them from future SteamOS updates that might break their configurations.

How about a build, test, or demo environment for software development?

You might boot a different SSD for each client? Maybe you have a separate encrypted partition for each client on a single external SSD? You could boot your Steam Deck off that SSD, then you can boot up the correct set of machines for your client, and if you don’t have your Steam Deck available, you could probably boot those same virtual machines on your laptop.

I imagine most folks would do this sort of work in the cloud, but maybe that just doesn’t fit your workflow. Maybe you already have a squadron of virtual machines running on your laptop.

If you do, maybe the Steam Deck would let you offload some of that to another device to free up resources on your laptop.

The Steam Deck is just another computer.

I already carry a tiny HDMI-to-USB dongle in my bag for my Pi-KVM. Will this work with my Steam Deck? I don’t see why not!

This is definitely a ridiculously small niche of a use case, but I’d find it handy. I use my Sony ZV-1’s HDMI output as a webcam for live streaming. If you’re some sort of YouTuber, you probably packed at least one camera anyway, but why would you want to connect it to your Steam Deck?

I wouldn’t mind being able to live stream to YouTube remotely without bringing my admittedly gigantic laptop—the Steam Deck is probably less than ¼ the size.

Every once in a while I wish my live-streaming gear wasn’t plugged into my desktop PC. Maybe I’d like to shut down the PC to eliminate the fan noise. Maybe I’d just like to not worry about software on the PC goobering up my live stream. Maybe plugging the camera into the Steam Deck would just help with cabling logistics.

I know there aren’t many people who would do this, but I’d be excited to have the option.

Could I use the Steam Deck as a tablet?

I am guessing it would be super awkward, but it might work in a pinch?

I use a 7” Android tablet as a book reader. Using a color theme like Solarized Dark is quite pleasant when reading with the lights out. Could I leave the tablet at home and read science fiction books on my Steam Deck?

If the software existed, the Switch would do a fantastic job at this. All you’d have to do is pop the controllers off.

The controllers are integrated into the Steam Deck, and they’re much wider than Switch controls. Valve has been pretty quiet about the dimensions and weight of the Steam Deck, but I’m willing to bet it will make the Switch look petite.

If I were stuck in a hotel room at 2:00 a.m. itching to read a few chapters, would I be able to do it on the Steam Deck? Can I surf Reddit, Imgur, and Twitter? Can I read Hacker News? The answer to all these questions is definitely yes, but would I be comfortable doing so? That’ll be the question!

Will you do anything with your Steam Deck besides gaming?!

I want to hear from you. Are you planning on buying your own Steam Deck? Are you just going to use it as a game console? Are you going to use it to augment your other computing devices when you travel? Will you use your Steam Deck as a small laptop for writing blog content?