I probably wouldn’t have given this much thought if I didn’t have a stick of RAM fail on me last year. I don’t know that I can remember another time when a stick of RAM that passed a long Memtest86+ test failed on me, and this was a total failure. The machine locked up and wouldn’t boot until I found and removed the bad stick. 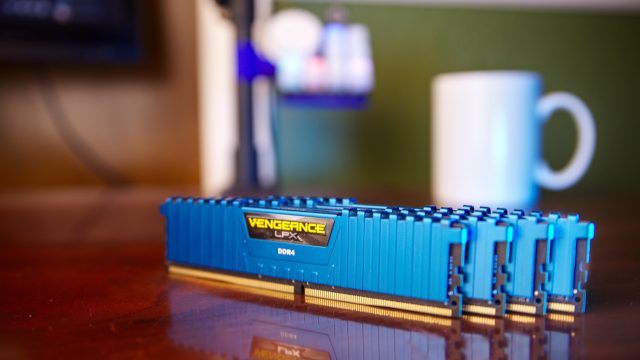 I couldn’t figure out whether I could do an advance RMA of my memory, and Corsair wanted me to RMA all four sticks as a set. I didn’t want to deal with downtime, and I didn’t want to buy RAM to hold me over while I waited, so I figured I’d limp along with this single-channel 24 GB configuration until it caused problems.

Running while short 8 GB really didn’t cause problems. Everything that I do fit pretty well into 24 GB of RAM. Even so, I bought a faster pair of inexpensive 16 GB DDR4-3200 DIMMs a few weeks ago, so I am back at 32 GB, back to a dual-channel configuration, and my slightly overclocked Ryzen 1600’s RAM is running at 2933 instead of 2666.

Some benchmarks are a quite a bit faster with dual-channel RAM, but I’m not noticing the extra 8 GB.

I’ve always bought as much RAM as possible

Within reason. There are always diminishing returns, but any extra RAM will be used for disk caching. For the last two or three decades, disks have been slow. Really slow. Especially when it comes to random access.

A 7200 RPM disk can perform between 100 and 200 random reads or writes per second. That was true for my 13 GB IBM Deskstar drives twenty years ago, and is true even for the latest 18 TB 7200 RPM drives today. The heads in a mechanical disk have to wait until the data they need passes underneath. Any given point on the disk only passes under the read head 120 times each second.

In those days, extra RAM was the only thing hiding those slow seek times.

My memory usage today is definitely higher than it was a decade ago, but I have always bought enough RAM to make sure at least 50% would be used for disk cache.

My last two workstations have had 32 GB of RAM

I am doing my best to think back to all past desktop computers. The timeline is pretty fuzzy, but it seems like I approximately doubled the memory each time I have upgraded. I almost listed each machine off here, but that feels unnecessary.

We don’t have to spackle over slow disks any longer. If I push my machine to the point where it only has a couple of gigabytes of free RAM to use as disk cache, it doesn’t matter. I won’t notice the difference.

While I am just sitting here writing this blog, my machine is using around nine gigabytes of memory for actual work. If I fire up a game, that will likely eat up another 10 or 12 gigabytes.

While I was limping along with only 24 GB in my machine, this was never a problem. Running a game might bring me down to just several gigabytes of RAM for disk cache, yet I didn’t notice any sort of slowdowns or stutters when I would switch back and forth between my game and productivity tasks.

My SATA SSD was fast enough!

I forgot to mention that the vast majority of the months where I was limping along with 24 GB of RAM happened before I upgraded to an NVMe. My 280 gigabyte per second Crucial SSD that could only manage a few tens of thousands of I/O operations per second was plenty fast enough for me to never notice when I as down to just a couple of gigabytes of memory available for caching.

The future we are living in is fantastic.

Your mileage may vary!

I was getting by just fine with 24 gigabytes, and I bet I could just barely squeak by with just 16 gigabytes of memory, but I wouldn’t want to bother trying. I definitely wouldn’t want to give up dual-chanel RAM, but if it were possible to buy 12 gigabyte DIMMs, I might have enjoyed having a dual-channel 24-gigabyte setup!

I’m using a handful of gigabytes of memory for Firefox, Thunderbird, Discord, and various other programs. The stuff that is normally running eats up around 9 gigabytes or memory.

The heaviest things I run are Davinci Resolve and games, but never at the same time. I don’t have enough GPU memory for that. 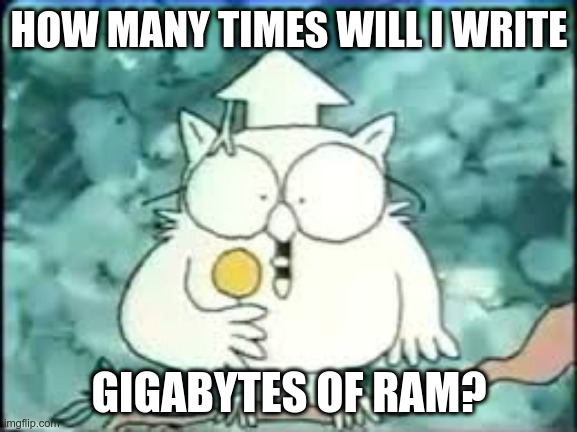 In the old days, I would have at least one or two virtual machines running on my workstation. Today, I have had a separate server in my office handling that job.

It used to be handy having my virtual machines on my laptop in the days when my only workstation was my laptop. It was awesome having everything with me at home, at the office, or on the road.

I get more value today having those virtual machines on a dedicated box. I don’t want Home Assistant or Octoprint to reboot just because my Nvidia driver goobers things up forcing me to reboot my desktop!

Besides which, it isn’t 2008 anymore. I don’t have to hope a coffee shop has WiFi. I don’t have to wiggle through an ssh tunnel to get to my data at home or in the office. I can share my phone’s 500-megabit Internet connection and connect to my machines around the world using Tailscale, and they’ll work just like they do when I’m at home.

You might need more memory for those tasks that I don’t have!

If you’re running a mess of virtual machines on your workstation, then you probably already know how much memory you need for those to comfortably fit. If the VM disk images live on an SSD or NVMe, maybe those machines don’t need as much RAM allocated as you think they do.

Those virtual machines are still computers, even if they are sharing processors and disks. Just like my desktop PC, our virtual machines don’t need to rely on cache memory nearly as heavily as they did before we had NVMe drives. The old rules of thumb from the days of slow mechanical disks just don’t apply anymore.

If you’re running make -j 32 on your 16-core Ryzen 5950X, you know you might need a lot of memory just to support all those compiler tasks, but it almost definitely isn’t a big deal if your whole source tree doesn’t stay cached all day. Your NVMe can touch hundreds of thousands of files every second without breaking a sweat!

Is swapping to an NVMe fast?!

I spent a week unscientifically messing with various swap and dirty page settings. I figured that Apple must be leaning on fast NVMe swap and paging to make their 8 GB M1 MacBook Air a usable machine. If they can do it, maybe I can force Linux to dip deeper into swap.

I was able to get about 5 or 6 GB onto my swap partition. When I did, things usually acted just fine. I couldn’t even tell you that my machine was swapping.

Every once in a while, though, things would get really goofy. The whole machine would just grind to a halt without much warning. I never timed it, but if I walk away, it would usually have worked itself out by the time I got back.

There’s probably somewhere between my current settings and the problematic settings that would work alright. Maybe the defaults would push me a few gigabytes into swap if I disabled half my RAM.

This was fun to experiment with a bit, but not worth spending a real amount of time working on.

It is better to err on the side of caution. If you need to round your memory requirements to the nearest pair of sticks of RAM, you should definitely round up instead of down. If you’re like me, and you think you can get by with 24 GB of RAM, then you had better buy 32 GB!

For decades I always made the same choice. If you asked me to choose between more memory or faster memory, I would always choose more memory. It wasn’t always a problem you could spend your way out of. Sometimes DIMMs with double the capacity were only available in slower speeds. Sometimes your chipset only supports faster RAM speeds with two DIMMs and not four.