I have been complaining about computer audio for quite a while. Routing my headphone and microphone cabling around my desk has been a nuisance, and headphone static has been a constant problem whenever my headset’s microphone is plugged in. On the rare occasions when I want to use my gaming headset for some multiplayer PS3 gaming, I have to fish out the headset’s extension cable and amplifier. This is troublesome because the cable is routed all the way around three sides of my desk.

My friend Brian must have gotten sick of listening to me complain, because he bought me a FiiO E07K for my birthday. I’ve been shopping for some sort of USB sound card for quite a while now, and I’ve been having trouble finding one that fits my needs. I was hoping to not just find a quality DAC for my headphones, but also an ADC to plug my microphone into.

Units with both features are hard to find. I found some really cheap hardware with both audio input and output, usually marketed as USB Skype adapters, but I didn’t think those would be much of an upgrade.

There are some fairly high-end DAC units that also feature an ADC, but they didn’t fit my needs even at their much higher prices. They are aimed at a market way above what I’m looking for. They have RCA and ¼ inch line-in and line-out ports, and I’m just looking to plug in a simple 1/8-inch, 4-conductor headset.

I had a lot of trouble deciding to pull the trigger on one of the units in between these two extremes because they don’t quite meet my needs. Brian knew I was looking at the FiiO E07K Andes amplifier, and we can all thank him for pulling the trigger for me!

The FiiO E07K is a small aluminum box that’s right around the size of your average smartphone, but just a little shorter and thicker. It has a pair of amplified headphone outputs on one end, and an audio input and mini USB port on the other. It feels like a very solid piece of hardware. It also has a small OLED screen on the front, but that is something I don’t really need.

The E07K is also equipped with a rechargeable battery. You can use the heavy-duty rubber bands to strap the E07K to your phone and connect them together with the short 1/8 inch audio cable, both of which were shipped with the unit. I tried this out with my Nexus 4, and I have to say that there isn’t a significant difference in audio quality when doing this. It would probably allow you to crank the volume up pretty high, but I’m not one to blast music in my ears. This feature is lost on me.

The FiiO E07K is equipped with a 24-bit, 96 kHz USB DAC (Digital Audio Converter). It can also be used at a more standard setting of 16-bit, 48 kHz. I’ve tried both, and even downloaded some very high-quality 96 kHz classical music tracks. They sound fantastic, but my ears can’t tell the difference between 96 and 48 kHz. Your mileage may vary!

The FiiO E07K vs. the on-board audio

On-board PC audio has been more than satisfactory for me. I don’t turn my speakers up very high, and the laptops I’ve been using for most of the last decade have been very well shielded. The new desktop machine I built last year has been a bit less pleasant to my ears, though. 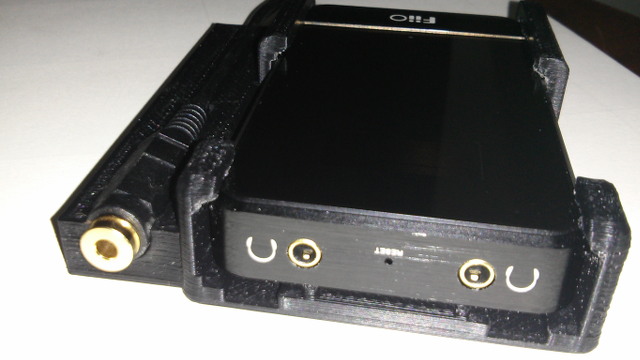 The FiiO E07K generates absolutely no audible static that my ears can detect. I didn’t even realize just how much static was coming out of my headphones before. It was very faint, but I now know that it was there! Unfortunately, I don’t have a convenient way to use the FiiO unit with both my speakers and headphones.

I am absolutely amazed at how much better games sound through my headphones when using the FiiO DAC. The first thing I fired up was Team Fortress 2. I tweaked the volume of the FiiO box to match the level that I normally use when playing. The Reserve Shooter has A LOT more bass now, and I can hear low-volume chatter in the distance (“Stand by little wagon!”) much more clearly than before.

I don’t know if this is due to the higher-quality DAC or if the FiiO’s equalizer settings are doing a better job.

Static on the microphone!

My Monoprice Amplified Gaming Headset uses a 4-conductor 1/8-inch headphone jack to connect its speakers and microphone using a single port. This didn’t seem like it would be a problem. I ordered a cable to split it into separate microphone and headset connectors, and I ordered a long extension cable to plug the microphone directly into the computer.

I even designed and 3D printed a custom mount to attach all of this directly to my desk. All of this worked just as I planned except for one small detail: I’m still hearing static in the headphones when I plug the microphone in!

It is a lot less static than I had before. If I connect everything up before putting the headphones on, I won’t even know that it’s there. It is much quieter than my computer’s fans. The static is very obvious if I plug in the microphone cable while the headphones are already on my head.

I don’t have a good way to work around this issue. The static is very quiet, and I only have to listen to it if I’m using the microphone. Thankfully, I don’t use the microphone very often.

I’m very pleased with the FiiO E07K DAC. It sounds wonderful, makes my games sound a lot better, and it is small enough that I’ll have no trouble taking it with me when I travel. It’d be nice if FiiO would release a DAC anywhere in the $50 to $150 range that also includes an ADC. If the E07K had a microphone input, or better yet, a 4-conductor headset jack, I wouldn’t have anything to complain about.