I woke up last week, sat down at my computer, and one of my QNIX QX2710 monitors wouldn’t wake up. It was yet another in a series of small, unlucky happenings that have been occurring here for the last month or so. Fortunately, I know exactly what to do when a monitor dies—replace it!

I almost immediately placed an order for another QX2710, but I decided to investigate the market first. It has been almost two years since I bought these monitors, and I’ve known the 27” QNIX to be a great value for a lot longer than that. I haven’t been paying as much attention lately, but 4K monitors have gotten quite affordable. Maybe there’s something now that fits my needs better than the QX2710.

It isn’t time for me to move up to 4K yet. The first problem is all of the reasonably-priced 4K monitors are using TN panels. I don’t ever want to go back to TN. I prefer the vibrant colors and large viewing angles of my QNIX’s PLS panels.

Also, all of the currently available 4K monitors are limited to a refresh rate of 60 Hz. After gaming for so long at 120 Hz, there’s just no going back. First-person shooters just look so much smoother at 120 Hz! 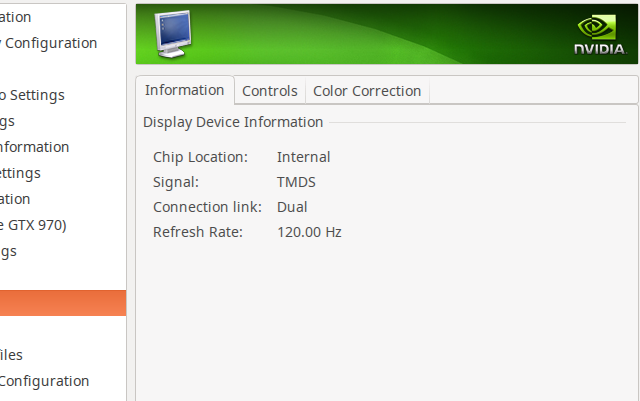 Borderlands 2 and Borderlands: The Pre-Sequel spend as much time under 60 frames per second as they do above. I don’t think either game would run very smoothly at 3840x2160.

These concerns of mine shouldn’t worry you if you’re not as interested in gaming as I am!

I only game on a single monitor, so I could have replaced my dead QX2710 with a 28” Samsung 4K. The biggest problem there would be the huge differences in DPI between the two monitors. The Samsung has a DPI of around 150, while the QNIX has a DPI of around 108. That means that a window moved from the Samsung to the QNIX would look almost 40% larger.

The pixel density upgrade of the 28” UHD monitor would be nice, but my monitors sit just out of an arm’s reach, so my 27” QHD monitors should almost qualify as “retina” by Steve Jobs’s definition.

The Crossover was a tempting and interesting surprise. It is a 40” monitor with a 3840x2160 TN LCD panel. At around $700, the big Crossover monitor costs a lot more than the QNIX, but it would allow me to scale down to a single monitor AND increase my pixel count at the same time. The Crossover 404K was the only monitor that truly made me question whether I should buy another QX2710.

I was worried about the physical size. The Crossover is 12” wider than a 27” monitor. This is pretty close to ideal, because that’s about the limit of my viewing area without having to turn my head.

The part that I’m less excited about is that the Crossover is 6” taller than a 27” QX2710. As far as I’m concerned, my QNIX monitors are pushing the limits of comfort on the vertical axis. The Crossover would end up sitting just a few inches off the desk, and I’m not so sure I’d be happy with that.

I also had some concerns about using this monitor for gaming. Just like with the Samsung 4K, I’d be unhappy about downgrading to a 60 Hz TN panel, but I might be willing giving up my 120 Hz gaming to finally have a single, huge display!

The Crossover 40” has roughly the same pixel density as my QNIX 27”. That means all my terminal and text editor fonts would look nearly identical on either monitor from the same viewing distance. The difference is that the Crossover would give me over 8 million pixels on a single monitor vs. 7.2 million pixels across TWO QNIX QX2710 monitors.

If I didn’t know or care about high refresh rate gaming, this would definitely be the monitor to buy. I could fit miles and miles of terminals, text editors, and web browsers on this thing!

There were no QHD IPS or PLS monitors with 120 Hz refresh rates available when I bought my first QNIX monitors. This is no longer the case. The ASUS MG279Q is the same size and resolution as the QNIX QX2710, but the ASUS comes from the factory supporting a 144 Hz refresh rate!

If you are looking for a trusted, name-brand monitor for gaming, I don’t think you can do any better than the ASUS MG279Q. High refresh rates are simply amazing when playing first-person shooters, and all games look great on an IPS panel.

The ASUS MG279Q wasn’t a good choice for me. I can buy two QNIX QX2710 monitors for less than the price of the MG279Q. That means I’d want to buy two 27” QHD monitors instead of one!

I don’t want to pay more than double for a 20% higher refresh rate, and I’d prefer to have a pair of identical monitors on my desk. Even if it means I’ll have to debezel a new QX2710 shortly after it arrives.

I really like the idea of ultrawide monitors, and the 34” LG 3440x1440 monitor seems like it would be the ideal size. The 34” LG ultrawide is about the same height as a 27” 2560x1440 monitor, but it is an extra 880 pixels wide. That happens to be about how much of my two monitors I can use without having to turn my head.

Unfortunately, I think the LG 34UM95C costs too much. At over $800, it costs more than either the 40” Crossover monitor or three QNIX QX2710 monitors. That’s just too much of a premium for 880 more horizontal pixels.

I may have thought about buying the Crossover 40” 4K, but I didn’t think about it for very long. I ended up ordering another glossy QX2710 from Amazon. I bought the last two through eBay, and they arrived from overseas very quickly, but not Amazon Prime quickly. It cost me a little more this way, but I was in a hurry!

One of the unlucky things that happened to us last month was our air conditioning died. It took much, much longer to get the problem resolved than I would have liked, and my home office was up over 95° for several days. It is normally around 72° in here.

I don’t know that I can blame the failure on the additional heat, but I do have a reason for bringing it up. On one of the hottest days, I noticed a line of flickering green pixels down the center of that monitor when visiting a dark gray website. The first thing I thought was that overclocking that monitor to 120 Hz must be pushing this monitor right to the limit if the extra heat is pushing it too far.

I clocked that monitor down to 110 Hz, and the problem went away. I hadn’t thought about it again. It was nice and cool in my office the morning after the air conditioning was finally repaired, and that’s also the morning that the monitor stopped working.

I’m not sure if there is a correlation between the monitor failing and the heat, but I don’t trust coincidences. One of these days I’ll crack the dead monitor open to check for simple things like bad capacitors. The control board is now sealed in with JB Weld, so I’ll have to cut my way in. I’m not in a hurry to do that!

Why would you buy another one after this trouble?

Even with a failed monitor, I’m confident that I made the right choice when I bought these monitors. The first two monitors cost me $651. A pair of the least expensive name-brand 27” 1440p monitors would have cost me around $1100 at the time. Even after spending almost $300 on a replacement this week, I am still ahead by $150.

I still feel that the QNIX QX2710 is still one of the best values out there. There are other comparable name-brand monitors available today, and they don’t cost three times as much now. The 27” ASUS PB278Q is only about $150 more than the QNIX QX2710, and the ACER K272HUL is less than $100 more.

They’ve redesigned the QX2710. I finally got a chance to take apart my new QX2710 to remove the bezel, and I was pretty disappointed when I got inside. The QX2710 no longer uses the same metal frame around the LCD panel, and there is a new circuit board extending almost an inch below the screen.

I think debezeling would work as well as before, but it won’t work well in my case. I wanted to have two matching, debezeled monitors again, and the new monitor looks nothing like my old one. I removed the last remaining piece of the monitor’s stock stand, and I put it back together for now.

There are some other changes as well. The panel is different, and the color output doesn’t quite match the old models. I was able to fiddle around with ICC color profiles, and they look close enough for me now.

I’ve been reading rumors that the new QX2710 glossy monitors can no longer be overclocked. They say if you do overclock them that they will just skip frames. My new monitor made it to 110 Hz. I do not have a good enough camera to verify that there is no frame skipping, but I’m quite confident that there isn’t any.

The simple act of quickly dragging a window around the screen looks much smoother at 120 Hz than it does at 60 Hz. I monkeyed around with the refresh rates on both monitors, and I dragged windows around all over the place. I’m pretty confident that neither screen is skipping frames. 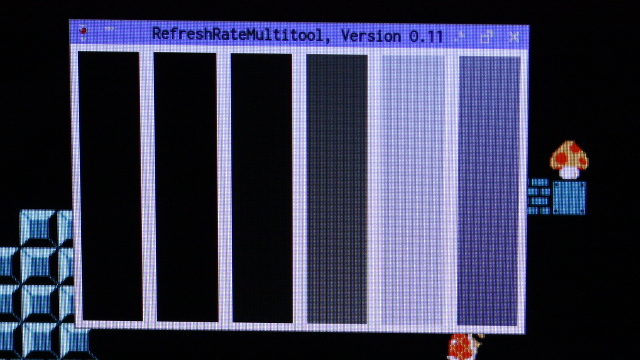 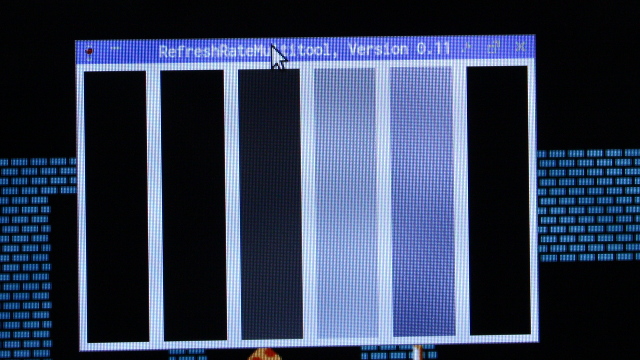 I finally bought a DSLR, and I was able to test both of these monitors for “frame skipping” and “frame doubling.” I am happy to report that they’re both able to overclock flawlessly. When I set the shutter speed to 1/400 or faster, the camera shows a single white bar. This shows that there is no “frame doubling.”

The pictures above were taken with a shutter speed of 1/60. At that speed, you can see some light from the next and previous bars. This shows that there is no “frame skipping.”

I have yet to decide what to do about this situation. The new monitor is just fine, but my desk looked so much nicer with a pair of matching, debezeled monitors!

Aside from my bezels no longer matching, the biggest problem with running an old QX2710 right next to a new QX2710 is the big difference in their color output. I think both monitors look just fine on their own, but the differences were driving me crazy.

I downloaded just every ICC profile from the QNIX Monitor Owner Club forum post, and I tried them using them in all sorts of combinations. I just couldn’t tune in any combination I was happy with. The new monitor was limited to about 110 Hz at best, and that was just so much brighter than the old monitor at 120 Hz. I was more than a little tempted to buy a color calibration device.

I’ve come to a compromise that is close enough for me. I found a pair of color profiles that were close, but my old QX2710 was still too bright. I tried adjusting the brightness with the controls on the monitors, but that didn’t get me far enough.

I am now running the old monitor at 102 Hz and the new monitor at 96 Hz. They’re definitely not identical, but they’re pretty close. Close enough that I stopped noticing the difference. At least until I started writing this update!

These are the ICC color profiles I’m using.