Today has been quite a roller coaster for me!

I was getting ready to 3D-print some stock for my Tindie store yesterday, when I noticed a slight aroma coming from my old MakerFarm Prusa i3 printer. It wasn’t a strong smell, but it seemed odd. I haven’t printed any ABS in almost a month, so I figured I just wasn’t quite remembering the odor of molten ABS.

About one-third of the way through my print, I noticed that the heated bed’s temperature was dropping. I realized that what I had been smelling was either the jacket on the heated bed’s wire or the screw terminal melting.

The print finished, and none of my ABS parts lifted from the bed, so I’m in good shape for a short while. I’ve been hankerin’ for a new 3D printer for a long time, and a hardware failure on my 6-year-old machine seems like a good excuse!

I quickly decided I wanted a Prusa MINI

I argued with my friend Brian about this. The Prusa MINI has a smaller build volume, and a much less robust layout than my old printer. Why on Earth would I downgrade in so many ways?

I only fire up the 3D printer once or twice a month these days. The Prusa MINI should handle my workload just fine, and the MINI has all the features that my ancient printer lacks: auto mesh bed leveling, a filament sensor, recovery from power losses, and ultra-quiet stepper motor drivers. That last part is what I’m most excited about.

I figure that the Prusa MINI ought to be enough 3D printer for 99% of people. Brian kindly pointed out that I might be part of the 1% here. That may have been true before I bought my Shapeoko CNC. Before that, I might have reached for nylon filament when I needed something really durable. Today, I would just cut something out of carbon fiber!

Nylon seems to be within spec for the MINI too. It isn’t in the list of officially supported materials, but the specs claim the extruder can handle 280 degrees Celsius. My prints with Taulman 910 were stronger printer at 285 degrees, but it prints just fine at 275 degrees!

The Prusa MINI ships with all the quality-of-life features I’ve been jealous of, but it doesn’t cost much more than popular budget printers like [the Ender 3][e3].

I was about to order a Prusa MINI. Then I saw that they aren’t going to be shipping new orders until September. That’s at least four months away!

Should I just repair my workhorse of a printer?

In some ways, my ancient MakerFarm printer is absolutely awesome. The stepper motors are oversized and powerful. The old Wade’s extruder with 3mm filament is almost impossible to jam, and I can print that thick TPU filament at 75mm/s! The TPU prints come out ugly with this drippy old Magma hot end, but they print fast and rarely fail!

You should have heard the noise my old printer made when a spool of 3mm ABS got tangled up. The powerful extruder kept pulling and pulling, and it was enough to flex the wooden frame quite a bit. Eventually, the 3mm ABS was pulled too hard, and it snapped! It is the loudest bang I have ever heard in my office. It was quite terrifying and unexpected. I don’t think a Prusa MK3S or MINI could do this.

The carbon fiber brackets take less than two minutes to cut, but the material costs more than filament. I think my printer is pretty quick, but it still took over 2 hours to print 4 ducts. #3dprinting pic.twitter.com/bGvHT26TTi

The MakerFarm i3 was only sold as a kit. I bought this one already assembled from a guy 30 miles north of here. It was very poorly assembled. The Y-axis assembly fell apart on me in the first week, and the wiring is an absolute rat’s nest.

When I saw that I’d have to wait four months for a replacement, I did some troubleshooting. I unscrewed the bed’s wires from the screw terminals, and unbolted the bed from the Y axis. Everything tested fine with a multimeter, but the jacket on these cheap wires was getting brittle.

I soldered on some nice silicone-jacketed wire from my collection of miniquad gear, and I plugged the bed back in. I’m going to tell you that I tested the bed, and it heated right up, but it is unsafe.

One of the melted screw terminal’s threads felt like they gave way right as I got it tightened, and I can see some charring around it. This is a common enough failure on RAMPS boards. 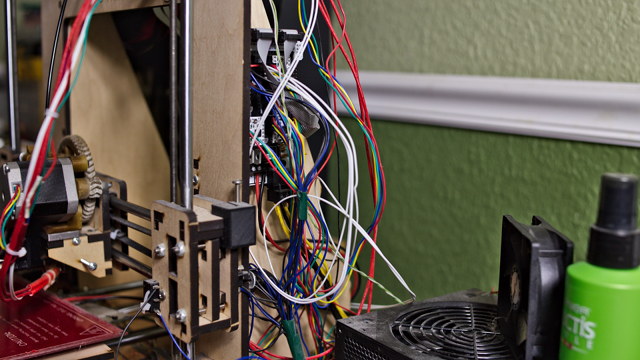 Even with these issuess, I wanted to see if the bed was working. I do have a fire extinguisher here in my office, so I wasn’t afraid to give it a short test.

The quick fix to get me safely running until September would be to remove the screw terminal and solder directly to the RAMPS board. If you’ve seen the rat’s nest of cables I’d have to dismantle and reconnect to do this, you wouldn’t want to do it either.

I just realized we haven’t talked about price!

The Prusa MINI looks a bit flimsy, and the build area is a 7” cube. That’s 1” less in each dimension compared to my MakerFarm printer.

The lead time on the fully assembled Prusa MK3S is currently 5 to 6 weeks. I’m not happy about it, but I can see surviving 1.5 months without a 3D printer, but waiting 4 months or longer for a Prusa MINI sounds scary!

I enjoyed the idea that I could almost buy three MINIs for the price of a single MK3S. There’s a possibility we may need a small farm of printers for our OoberLights project. If that’s the case, I’d much rather have a trio of Prusa MINIs than a single MK3S, but you can’t always get what you want.

I’m having trouble getting Prusa’s website to let me enter my credit card information. Maybe I’ll have that sorted out before I publish this blog. Maybe I’ll give it a day or so. Maybe I’ll wind up just using Paypal. Who knows. The important thing is that I’ll have a Prusa MK3S at my house in less than two months!

That’s the total after shipping, and I’m certain it will be worth every penny.

The MK3S is a much more rigid design. The Prusa MINI has that arm supported on only one side, and that’s generally problematic. You aren’t going to push the MINI much harder than whatever the stock printing speeds are set to. I bet I can crank things up on the MK3S and reach speed and acceleration settings not too far behind my MakerFarm machine.

Here's a tiny clip of the #MK735 's motherboard tray as it's slowly #3DPrinting. I don't think it'll be done before I wake up in the morning! pic.twitter.com/Z9faGfiWdP

I wasn’t going to miss the build volume I would have lost by upgrading to the Prusa MINI—my breadboard vise would still fit! Even so, it doesn’t hurt to have some extra room on the MK3S.

Today, I have often had to cancel prints and start over, because my bed and nozzle expand as they warm up. Things seem alright when I check the height, but by the time I hit print, things are a little off. The Prusa’s automatic bed leveling will save me a bunch of time and frustration.

I’m excited, even though I was hoping to put off my upgrade until the next iteration of the Prusa printer, but it looks like that just isn’t in the cards. I’ve been assuming that the Prusa MK4 would include the 32-bit controller from the Prusa MINI, and probably a slew of other neat improvements. I guess I won’t be seeing those improvements improvements for quite a few years, but that’s fine.

What do you think? Should I have waited until September to try the Prusa MINI? Will I be happy that I spent three times as much on the bigger machine? Will I just not care? Let me know in the comments, or stop by the Butter, What?! Discord server to chat with me about it!