I recently built a new Linux workstation to replace my laptop, and that got me thinking that it was probably about time to upgrade Chris’s laptop as well. I did put an SSD in her very old Dell Inspiron 6400 last year, and that did breathe a bit of new life into it, but having only about 3.2 GB of usable RAM was really starting to feel cramped.

She hasn’t taken her laptop out of the house in over a year, so I figured it was safe move her back to using a desktop computer again. She doesn’t need as much horsepower as I do, but I wanted to make sure that her new machine would be a significant upgrade. 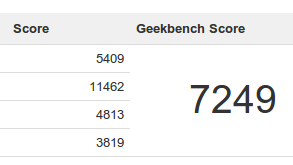 I thought it might be worthwhile to someone if I published this parts list. All the hardware is working just fine under Ubuntu 13.04, and this combination of hardware also managed to eke out one of the higher Geekbench scores for an FX-4130.

Even though I had to buy a new video card for this machine, the price was still over $200 less than my own 8-core machine. That’s a pretty significant savings, and for her purposes this machine won’t be noticeably slower, either.

Chris doesn’t often perform tasks that would benefit from the eight cores of an FX-8350—single core performance is much more important for her. The FX-8350 only outperforms the FX-4130 by roughly 15% in single threaded tasks. That’s a very reasonable performance hit to take in order to save $90.

I’m not a very advanced gamer, but none of the games I play seem to use more than three or four cores. The FX-4130 should work nearly as well for gaming as the FX-8350.

Taking a chance on a different motherboard

There was a combo deal on the motherboard and CPU when I ordered these parts last week. I ended paying about $30 less than what I listed up above. I’ve had good luck with Gigabyte motherboards in the past, and even if it ended up running a bit slower, that would be alright.

I’m actually quite pleased with this motherboard, even if the chipset is getting pretty old now.

I think 8 GB is a little on the low side, but it is definitely enough to get by. Her computer has been up for a couple of days now, and she’s barely touching swap and has plenty of cache.

If you’re primarily a gamer, you probably won’t notice much improvement today with anything beyond 8 GB of RAM. That is likely to change in the future, but hopefully memory prices will come back down by then.

Don’t tell Chris, but I ended up stealing her Raidmax RX-500AF, and I put the loud Topower ZU-650W in her new machine. My office is a noticeably quieter now!

I went into quite a bit of detail on the benchmarks I ran in my last workstation build entry. I’m going to try not to be as long-winded this time.

The FX-8350 machine is only about 15% to 25% faster in the tests that stress only a single core and about twice as fast when they are maxing out all of their cores. The FX-4130 is one generation older and 400 MHz slower than the FX-8350, so I think the FX-4130 is doing a bit better than I would have expected.

There are some asterisks in that table next to some the FX-8350’s scores. My FX-8350 is currently overclocked by 200 MHz, and I don’t have scores recorded anywhere for those tests at stock speeds. Those numbers may be a little inflated, but they aren’t all that far off.

I was planning on replacing my NVidia GTX 460 with the new GT 640. I didn’t research this much at all. It was one of the better-looking cards at the price point I was aiming for. It has more CUDA cores than my GTX 460, but they run at a somewhat slower speed. Some quick math in my head said that would probably make it a wash as far as performance was concerned.

The GT 640 I ordered also has twice as much memory as my old GTX 460. Rumor has it that the extra video RAM is helpful with higher-resolution displays, and I’m waiting for a pair of QNIX 2710 2560x1440 displays to arrive. My own math and logic didn’t quite jibe with that rumor, but I didn’t think a video RAM upgrade that was effectively free would hurt.

It turns out that the GT 640 is quite a bit slower than the GTX 460. The first few games I loaded up were getting similar frame rates, so I figured I did a good job. The next day, though, I noticed some significant stuttering in Paranautical Activity, especially in the boss rooms.

The GT 640 is a fine video card for the price, though. It may be slower than the GTX 460, but it costs less and uses significantly less power. My GTX 460 requires TWO PCIe power connectors, and the GT 640 doesn’t require any. That means the GT 640 makes for a cooler computer that costs a bit less in electricity to run.

I’m very happy with this budget conscious Linux workstation build. When it comes to common office productivity or gaming, this FX-4130 desktop computer is almost as fast as my FX-8350 desktop. This is perfect because this is exactly what this new machine is intended to be used for.

It ended up costing me about 30% less to build this FX-4130 based machine than it would have cost to build another FX-8350 rig, and Chris won’t even notice the difference.