My Craft Coffee experience is changing a bit this year. Last April, my friend Brian bought me a six-month subscription to Craft Coffee. He knows I enjoy coffee, and he knows that I set a blogging goal for myself. He thought that having some coffee show up once a month would get me something extra to write about each month.

That has worked out quite well. I have enjoyed recieving coffee each month, and it has been a lot of fun writing about all the coffee that shows up. I decided to include my little referral code in each blog post. I didn’t really think anyone would use it, but people are using it. At first they were using it often enough that my subscription was slowly being extended, but now it is being used quite a few times each month. It is now being used at a rate beyond which I can drink enough free coffee. 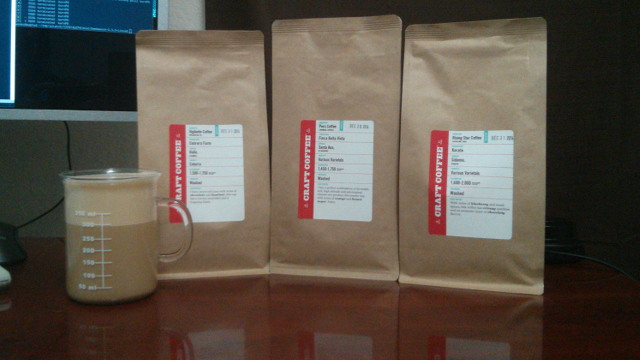 The wonderful people at Craft Coffee have helped me increase my order from one 12-oz bag every month up to three 12-oz bags each month. This is probably more coffee than I can manage to drink in four weeks, but it should make my writing a bit more interesting.

Being transparent about all of this free coffee

I’m trying to rewrite the “referral code” blurb at the end of these blog posts. I’m not doing a very good job. This is probably because I am a terrible salesman, and I don’t even want to be a salesman.

Even if no one was using my referral code, I would have paid to extend my Craft Coffee subscription. I still believe that Craft Coffee is a very good value, and the coffee that they send me is much better than anything I have managed to find locally.

There were three bags of coffee waiting for me when I returned home, and the first thing I did was read Craft Coffee’s notes on each bag. Making a choice as to which bag of coffee to open first was an easy choice. Just read that description. How can I not immediately try the one with the words “only a perfect combination” in the notes. They’re even telling me to “enjoy!” 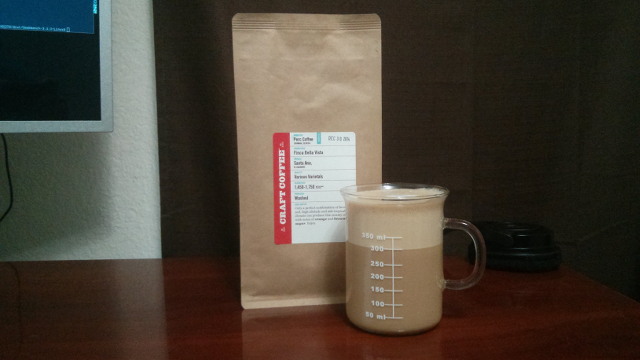 My first Perc Coffee latte was a little disappointing. This happens to me quite a bit, though, and my recent travels have made me a bit rusty. I’ve been adjusting the grind, and I ended up with an amazingly delicious latte by the third or fourth try.

These beans are roasted slightly darker than I’m used to, but they’re still lighter than what most people probably use in their espresso machines. It doesn’t have huge, easily identified flavors like the amazing strawberry taste of the Yirgacheffe beans from Slate Coffee Roasters. It doesn’t have that amazing peanut buttery smell of the coffee from modcup.

It doesn’t need to have these things. It is just a delicious cup of coffee. I’ve been doing my best to tune in the perfect espresso shot of Perc Coffee for my lattes, and no matter where I land, they’re all delicious. I’ve had a few very short pulls that were close to 1-oz, and I thought for sure they’d be terrible—I was wrong. They were different, but they were still delicious.

With most beans, I usually settle in at pulling a shot that is probably on the ristretto side—about ¼-oz short of a full double shot in about 22 seconds. Usually if I go any farther or longer than that, my latte ends up a little bitter. I purposely pulled a more proper shot near the end of the bag of Perc Coffee. It very nearly filled my 2-oz demitasse cup in about 27 seconds, and it made for another delicious latte.

Nutella. These lattes that I’m making with the beans from Vigilante Coffee definitely make me think of Nutella. It isn’t as sweet as Nutella, even though I use quite a bit of sugar—it definitely makes me imagine what a coffee-flavored Nutella might taste like.

I’ve had some trouble tuning in the Vigilante Coffee. I am following my usual process for a new bag of coffee. I take a partially wild guess as to the initial grinder setting, and I pull a double shot. I’m usually pretty close, and I am able to move the microadjustment lever to the correct position in about two or three tries.

The Vigilante Coffee has been mocking me the entire time. I’ve pulled about a half-dozen nearly identical ristrettos. I’ve moved the microadjustment lever up three clicks before each new shot, and the volume just doesn’t increase for me. I’m used to the difference between an OK shot and a good shot being only two clicks, so this has been very surprising.

I finally managed to get a longer shot, but it pulled way too fast. The last three clicks took me from a ristretto to a waterfall! It took longer than I would have liked to get here, but I’m now tuned in right around where I want to be.

I’m definitely not complaining, though. Those very ristretto shots all made delicious lattes, and the more dialed in the shots get, the more balanced the coffee from Vigilante Coffee tastes! Delicious coffee often makes up for my rookie mistakes!

If you use my referral code (pat1245) when checking out at Craft Coffee, you will get a 15% discount. Not only will you save money, but they tell me I’ll get a free month of coffee with every order. That sounds like a good deal for both of us!