My friend Brian is an awesome guy. He wanted to pay me back for many years of various sorts of technical help, blog-related advice, Piwik hosting, and virtual private server hosting, so he decided to buy me an espresso machine. Not just any espresso machine, but one of the best espresso machines you can buy without spending thousands of dollars on an actual commercial machine.

He bought me a Rancilio Silvia. This machine is a HUGE upgrade over my old Mr. Coffee espresso machine. It is big, heavy, and very durable. Almost everything except the water tank is made of steel or brass, and if anything ever does go wrong, almost all of the internal parts can be purchased separately. I expect to be pulling shots with this machine for the next ten or twenty years.

I’m also replacing my cheap burr grinder with a better model. I deliberated on this quite a bit and decided to go with the Baratza Preciso grinder. The other two choices on my list were the Rancilio Rocky and the Gaggia MDF.

The Gaggia was very tempting because the refurbished MDF grinders are half the price of the Baratza Preciso. I didn’t really like what I was reading about it, and it sounds like the doser on the Gaggia is quite messy. I’m expecting the grinder to last as long as the Miss Silvia, so I didn’t mind spending a little more. 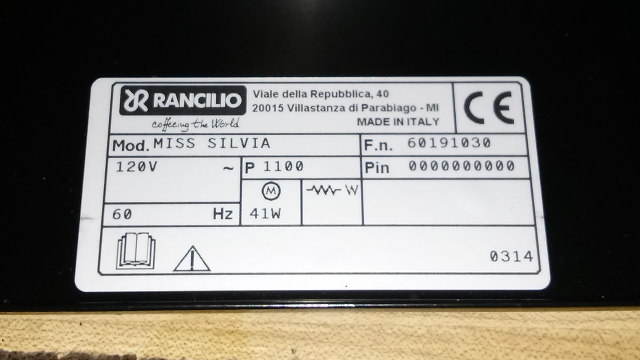 The Rancilio Rocky sounds like a quality machine, but I was seduced by the vast array of grind sizes of the Preciso. The Preciso has 40 “macro” adjustments that can each be fine-tuned with 11 “micro” adjustments. That is probably a lot more control than I need, but I read that only about three grind settings on the Rocky are suitable for espresso. The Preciso can also grind coarse enough for a French press, while the other two can’t.

The problem with the grinder

I couldn’t order the grinder from Amazon. At least, that’s what I thought. The Baratza Preciso grinders at Amazon with Prime shipping didn’t seem to have the portafilter holder attachment. As I’m writing this, I realize that I was mistaken in that thought.

Since I wasn’t smart the other night, I ended up ordering my grinder from Whole Latte Love. I picked up the Racilio Silvia from Brian’s house tonight, but the grinder won’t arrive for another three days. This was a bit of a conundrum, since my grinder doesn’t have a fine enough grind setting for the Silvia.

We stopped at the Central Market on the way home from dinner, and I picked up some of their in-house roasted coffee. I bought some of their organic coffee from Rwanda. I picked some up last week, and it was pretty good. This time, though, I used their grinder. I figured this would let me play with my new machine before my new grinder arrives on Monday.

Trying out the steam wand

Last night, I watched Gail from Seattle Coffee Gear steam some milk with a Rancilio Silvia on YouTube. She told me about how much weaker the steam wand on the Silvia is compared to the high-end commercial machines, and watching her steam milk didn’t seem very impressive. It seemed to be working better than my little Mr. Coffee machine.

One of the first things I did after priming the machine was test out the steam wand. I pointed it at the sink, and I turned it on. Holy moly! It is SO much more powerful than my old machine. It seemed like it filled the entire sink with steam!

Gail is definitely using a much bigger frothing pitcher than my little 12-ounce pitcher. I filled it up less than half way, and I had to turn the dial way down to keep it from spraying my milk all over the place. I already ordered a 20-ounce pitcher.

I don’t steam my milk to as high a temperature as most people. I stop at around 130 or 140 degrees. The Silvia brought my milk up to temperature in about 20 or 30 seconds. It probably takes two or three times longer with my old machine, and the foam came out so much better. I’m sure that will improve even more once I practice more with the Silvia.

Pulling a good shot is a lot harder

I knew I was going to have trouble pulling a shot without a grinder. The first shot was very problematic. I filled up the portafilter, leveled it off, and tamped it down pretty hard with the weird convex tamper that came with the Silvia. I had trouble getting the portafilter onto the machine.

I took it off to see if I was doing something wrong, and there was an indent in coffee from a bolt on the Silva. This seems to be normal, but I assumed I had too much coffee in there. I muscled the portafilter into place anyway, and I pulled a double shot.

It was very uneven coming out, but it was coming out at close to the correct speed. I combined it with the milk I had just steamed and made myself a latte. I let Chris taste it first, and she made a horrible face. It did not taste good at all.

Then I tried measuring out about 14 grams of coffee. This should be about the right amount, but it didn’t pile up high enough for me to level it off correctly. I did my best, though, and tried pulling another shot. This one was going way too fast, and it tasted terrible.

My understanding is that there are two variables that control the speed at which the water moves through the portafilter: the size of the grind, and the force of the tamp. I can’t control the grind yet, but I can control the tamp, so tamping is what I did. I put in another 14 grams and I tamped it as hard as I could.

I’m a pretty heavy guy, and I put a lot of weight on that tamper. It wasn’t enough. It still passed through the portafilter like there was no coffee in there.

One last try for the night

I gave up on the idea of using 14 grams. Just like the first attempt, I put a big heaping lump of coffee in the portafilter and brushed off the excess. I tamped it down as hard as I could and pulled another shot. I pulled this shot into a 2-ounce demitasse cup.

It filled up in about 22 seconds. That sounds a little fast, but it was the best I could manage for today. I’m finishing up the latte that I made from that shot right now.

It is one of the worst lattes I’ve made this year, but it was good enough that I finished the whole thing. In my opinion, that means I’ve had a most excellent first day with my new Rancilio Silvia!

The new grinder will be here in a few days, and my next Craft Coffee delivery should arrive a few days after that. I have a feeling that next week is going to be a delicious one!