I’ve been carrying a micro FPV quadcopter in my bag for quite a while. I started with a KingKong 90GT, then made a huge upgrade to a Full Speed Leader 120, until finally making the minor upgrade to a Leader 3. These micros were always an afterthought for me.

Micros don’t fly as well as a 5” miniquad. They’ve been getting better quickly, though! The hardware has been improving, and so has the software. The gap between 3” and 5” FPV quads hasn’t completely closed, but it isn’t the chasm it was just a couple of years ago!

I still like having one in my backpack, even if they don’t fly as well. They don’t weigh much, and they don’t take up much space.

That performance gap is closing, and I bought a CNC router this year. Designing a spacious 3” micro quad with vibration damping seemed like it would be fun! That means it was time to try out one of these FPV cameras with a built-in HD recorder.

This blog post isn’t going to tell you how to get the best footage out of your Runcam Split—I haven’t been flying long enough to figure that out yet! I am going to tell you why I think there are times when you might want to settle for the footage from a Split or Turtle.

I didn’t have a terribly compelling reason for choosing the Caddx Turtle over the Runcam Split Mini 2. The footage straight off the Turtle seemed marginally more tasteful to me, and I remembered not having a good time getting the original Runcam Split Mini into Brian’s 3” micro last year.

As far as I can tell, there’s little difference in the video output of these cameras.

Every time I get home and look at my footage, I wish the Caddx Turtle had GoPro’s Superview. Everything looks so goofy and fish-eyed through the lens of the Turtle. This looks worse the farther the horizon gets from level. Near the top of a power loop, the horizon will be curved to a ridiculous degree.

The overall quality of the video isn’t the best, either. You can tell that the Turtle’s video files aren’t matching the bitrate of the GoPro, especially when you’re flying fast!

I believe using an ND filter on the Turtle would address some of my complaints. I’m planning on trying this out sometime!

Why the heck would I fly with a Caddx Turtle or Runcam Split if the GoPro is so much better?

If I weren’t in the process of designing a 3” HD micro frame, I might have already given up on the Turtle. Getting smooth video out of the Turtle is a challenge, especially on a 3” quad. My 680-gram 5” freestyle quad is almost always smooth, and 15 MPH winds don’t push it around all that much.

I feel there are at least two extremely compelling reasons to use a Caddx Turtle on a 3” micro quad: cost and safety.

That’s $250 for everything in the air: the quadcopter, the battery, and the HD camera. That’s less than the cost of a GoPro HERO6 Black. The only way I know of to make that GoPro fly for free is by throwing it!

If I want to capture some FPV footage in a spot where I might lose my quad, I know exactly which one I’m going to be flying!

Are these really the only two options?

Of course not! You can definitely build a capable freestyle miniquad for less than $550, and there are less expensive camera options. Foxeer and Runcam have made some reasonably priced action cameras.

You can still get refurbished GoPro HERO4 Session cameras at Amazon for less than $100. I have one in my bag as a backup. It fits my existing GoPro mounts, and it has Superview, but I’m always disappointed in the footage I bring home when I have to use it. I’m sure I’ll be saying the same thing about my HERO5 Session when I finally have to upgrade!

I could stick that $100 HERO4 Session and a $15 TPU mount on top of my $130 BFight 210 5” quad. I’m certain that that combination will fly smoother and record better freestyle video than the Caddx Turtle on a 3” micro, and the cost is about the same!

Cost isn’t the only difference

My own 5” miniquad with a GoPro Session weighs 680 grams, and it is capable of traveling at speeds of more than 100 MPH. This has a tremendous impact on safety, and the extra weight means things are more likely to break in a crash.

It is easy to destroy a $300 GoPro in a crash. I broke my first GoPro Session when I crashed into a tree. Trees are solid, but they’re not as solid as concrete! Just like everyone else, I have insurance on my GoPro cameras, so I had that one replaced. That takes time and effort, though.

Over the summer, I was riding my bike past a creek at the park. It is rather narrow, and the water is ten feet below the spot where I could stand. I decided I wanted to fly down there, so I loaded up my cheaper GoPro HERO4 Session, strapped my goggles on, and got into the air.

It was tight down there, and I had to fly slowly. There was quite a bit of scraggle, and I did nearly clip a ghost branch on my way back. I was shaky and nervous the entire time! I was only saving $100 by swapping GoPros. If I wound up in the drink, I could have been out over $600.

I wish I had my Kestrel that day. Risking a total of $230 would have improved my confidence tremendously!

Losing $230 into a river would bum me out very much, but I can do that three times, and it would still be cheaper than losing a single 5” miniquad!

This makes my 3” Kestrel my “hold my beer” quad. Is there a good chance the quad is going to get wet? Am I likely to lose my quad in the woods? Is it going to get stuck on top of a building? Hold my beer, and I’ll use my Kestrel!

Light weight has other advantages!

My usual backpack is a huge ThinkTank FPV Airport Helipak. Loaded up with all my gear and batteries, it is well over 25 pounds. It isn’t bad when I’m driving, but it is quite a bit to carry when I ride my e-bike to the park.

I have an AmazonBasics camera bag that I sometimes use to carry my gear, but I have to pare down quite a bit. I only bring my transmitter, goggles, one quad, and as many batteries as I can squeeze in. Sometimes I strap my 2-pound Moon Lence chair on there as well. 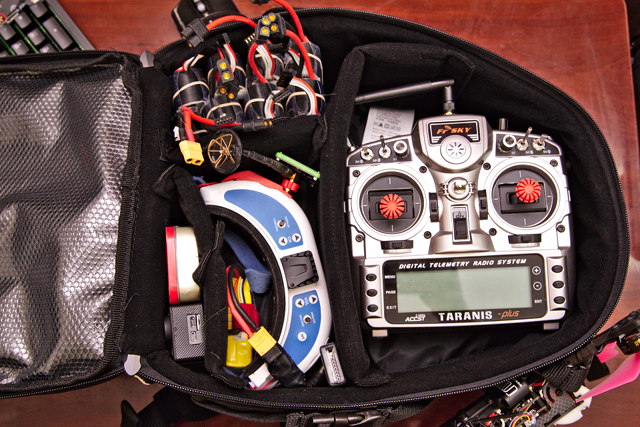 If I take my 5” quad, that means I’ll bring six batteries. With the chair, this weighs just over 12 pounds, and that’s enough batteries to keep me in the air for 18 to 24 minutes.

If I take my 3” Kestrel, I carry six 650 mAh 4S and six 450 mAh 4S packs, and I have plenty of room for more. With the chair, this comes in at around 9 pounds. That’s not a huge difference, but now I’m carrying enough battery for 45 minutes of aggressive freestyle flying, and everything weighs in at about 1/3 as much as my big ThinkTank setup!

I could easily fit more batteries and a spare Kestrel, and it still wouldn’t reach ten pounds. Fitting a second 5” quad would be cumbersome.

If you run a Turtle or Split, you may also be degrading the quality of your FPV video feed. I use Runcam Micro Eagle cameras on all my 5” miniquads, and the Turtle is a huge downgrade.

The Eagle has a wider field of view, transitions between lighting changes more quickly, and has much better dynamic range. The Runcam Micro Eagle costs $45. That’s 70% of the cost of a Caddx Turtle, but the Turtle also doubles as your HD camera.

I was flying on a cloudy day with the Turtle, and it was nearly impossible to even see the trees without leaves. It is difficult to spot the branches with a Runcam Eagle, but with the Turtle, small trees manage to completely sneak up on me!

FPV is full of trade-offs. This is just another one of those trade offs that you need to be aware of.

I hope the Turtle and Split continue to improve!

I doubt this is the end of the road for the Turtle and Split. They’re outclassed by a $100 GoPro Session from 2014, and that GoPro Session is already quite far behind the current $380 GoPro HERO7 Black. I am confident that Runcam and Caddx will continue to improve these cameras.

I’ll be surprised if a Turtle or Split doesn’t manage to surpass the performance of the old GoPro Session in a couple years. I’m sure GoPro will continue to improve their cameras, so I would be very surprised if Caddx or Runcam could ever manage to actually catch up.

They don’t need to catch up, though. They each have a camera that is a reasonable compromise. Their cameras are a fraction of the price, weigh next to nothing, and do the jobs of both your HD and FPV cameras.

Was the Caddx Turtle the right choice?

I have a short list of reasons for both why I’m pleased and disappointed with the Caddx Turtle. I expect there’s a good chance that I’ll change my mind about some of my complaints, so I’m going to hold off on talking about the pros and cons of the Turtle for now.

It is absolutely fine for what it is: a $65 camera that manages to handle the responsibilities of my $45 Runcam Eagle and my $200 GoPro. It does neither job as well, but it is a great value and compromise at this price point.

Just a year ago, I couldn’t have been more displeased with Splits or Turtles on micro quads. The footage was usually shaky, the quads didn’t fly all that well, and fitting all that gear into a single 20x20 stack was just too much work!

These cameras have made some incremental improvements in their recording capabilities, the 20x20 hardware has improved enough that it almost matches our 30x30 hardware, and Betaflight has micro quads flying better than ever. There’s also no shortage from frames with room for two or three 20x20 stacks—including my own 3” Kestrel frame!

There’s not much excuse left for not carrying a 3” HD micro quad in your FPV backpack. Are you flying with a Turtle or Split? Is it on a micro or a miniquad? What do you think of it? Let me know in the comments below, or stop by our Discord server to chat about it!