Not long after publishing my first blog post about my BFight 210, my favorite quad died. I was flying the Holybro Shuriken X1 at the park. I noticed I had some spectators on the sidewalk, so I decided to fly more spiritedly. 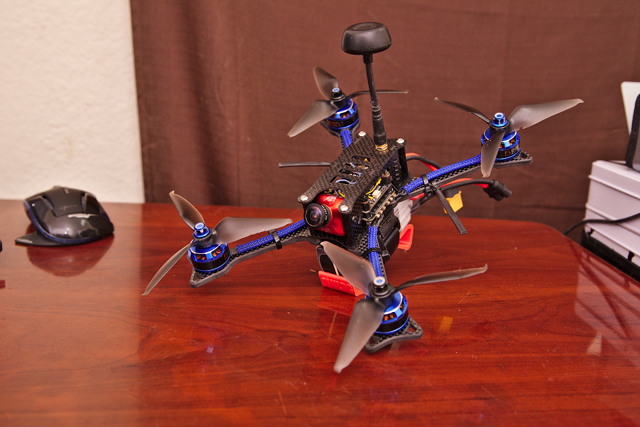 That isn’t the case. I suddenly lost video, and my Shuriken X1 just fell from the sky. The problem was obvious on a quick inspection. A component had been knocked loose on the board. I didn’t learn until later that night that it was an inductor.

It must have been hit in an earlier flight, and the constant vibrations finally broke the connection. It should be an easy fix, but I figured it was time to upgrade. The Shuriken X1 uses a single, oddly shaped circuit board for its flight controller, power distribution, and VTX.

I ordered an OWLRC Dragon frame, a Holybro Kakute F4 flight controller with integrated PDB, and an AtlAtl VTX. The plan was to pair these new components with the Shuriken X1’s 30a ESCs and its powerful Tiger Motor F40 II motors.

More importantly, this forced me to fly the BFight 210, and I flew it a lot!

Four weeks with the BFight 210

The BFight 210 is a fantastic machine for the price. It has some minor issues, but those problems were easy to mitigate.

Something I didn’t mention in my first blog post is that the video signal on the BFight 210 isn’t the best. I assumed it was just because I was using the sleeved dipole antenna that came with the drone, but switching to a circular polarized antenna didn’t clear up all the issues.

I decided to solder a 25V 1000uf Nichicon capacitor to the point where the XT60 cable meets the circuit board. The improvement to the video signal is significant. These capacitors cost less than a dollar, and I will definitely be adding one to all my drones!

The BFight 210 is light and fun. I’ve been throwing it all over the local parks. S-turning over trees, power looping trees, but mostly I’ve been practicing my low-to-the-ground flying. I’m getting a lot better at hitting gaps and openings in tree branches.

The biggest surprise for me is how efficient the BFight 210 is. When I’m cruising around low to the ground trying to hit gaps, it isn’t uncommon for me to get more than ten minutes out of a battery. The batteries come back with about 3.75v per cell. I’ve even had a couple of batteries last more than eleven minutes!

I let my friend Brian take the BFight for a spin. He ordered one for himself the next day. I also ordered one for a Christmas present. It flies smooth, and has more than enough power for a beginner.

I broke an arm

I’ve been worried about the BFight 210’s ultralight-style frame. The frame weighs 60 grams. The arms are narrow, and they’re only 4mm thick. Mine has taken a beating, but I finally lost an arm. 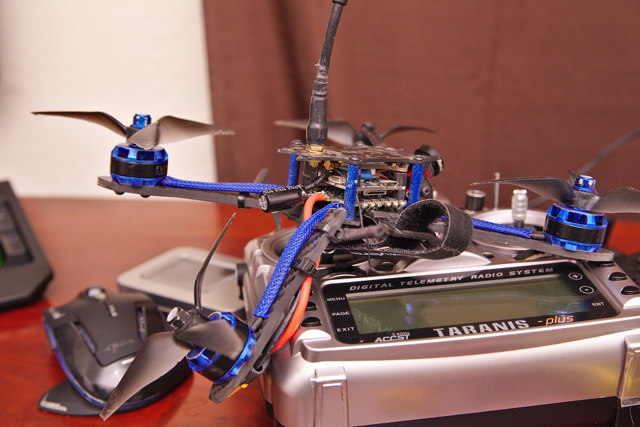 BFight 210 frames cost less than $35. That gets you four extra arms and a bunch of extra standoffs and screws. I thought about buying another BFight frame, but I decided against it.

I ended up ordering another OWLRC Dragon frame, even though the first one hadn’t arrived yet. I’m going to include my three spare arms with my BFight 210 Christmas gift!

The order of events

When I placed my order at ReadyMadeRC.com, the shipment from Banggood had yet to reach the United States. I chose Priority Mail shipping, so I expected the frame from ReadyMadeRC.com to arrive first, but it didn’t!

I decided that I wanted to have a 5” quad in the air quickly, so I decided to set the new flight controller aside and upgrade the BFight 210.

Transplanting the BFight 210 to the OWLRC frame was easy. I spent more time looking for missing tools and heat shrink tubing than I did working on the quad.

On my BFight 210, the motor wires were routed towards the center of the quad and soldered to the ESC from the inside edge. I knew I wouldn’t be able to route the same way, but they do have enough length to fit on the larger frame.

I didn’t have to solder. I just unscrewed everything from the old frame, and mounted it on the new frame.

The OWLRC Dragon is a 5mm frame—that’s 1mm thicker than the BFight 210. That means I couldn’t use the BFight 210’s 6mm motor screws, so I ordered a pack of 7mm M3 screws.

The OWLRC Dragon frame is a stretched frame, but it still bears quite a resemblance to the BFight 210 frame. It is about 30 grams heavier, but it is a lot sturdier.

How does it fly?

It is a bit heavier, but the BFight 228 flies great! It doesn’t feel slower, and it’s smooth and nimble.

I’ve been trying to fly through the back of “The Lady Tree,”“ yaw around, and fly back through the way I came. I fail a lot. Sometimes I turn too far. Sometimes I can’t manage to fly low enough on the way back.

What happened the first time I made an attempt with the Dragon frame? I made a perfect pass. Thought, back around, and through again. No problem.

Did all my practice pay off? Does the Dragon frame handle better? I’m not certain, but I think it is a combination of both. I don’t remember having much luck pulling this off before breaking the BFight 210 frame. I’m confident that the new frame handles better!

My friend Brian received his new Furibee drone the same day I was upgrading my BFight 210. It is a nice-looking drone, especially for the price—it is only about $30 or $40 more than the BFight 210!

As soon as I saw it, I said it looked like a BFight 210, but then I picked it up. The Furibee 215 feels a good bit heavier, and it should. The Furibee has bigger motors than the BFight 210, and the arms are 25% thicker—it should be harder to break than the Bfight 210!

I hope Brian lets me take it for a spin! It looks like it should be faster and sturdier than the BFight 210. Is it worth the extra money?

A bunch of us went flying at the park over the weekend, and Brian didn’t let me fly his new drone!

In truth, I didn’t even think to ask. I had too many drones of my own to test out. I’d already put quite a few batteries through my BFight 210 upgrade a few days earlier, but I had only just finished my Shuriken X1 transplant less than 24 hours earlier. I haven’t flow my X1 in a month, and I was too excited about flying it again to think about much else!

I did get to watch the Furibee Fire Dancer GT 215, though, and it looks like an excellent quad for the price. It looks and sounds faster than the BFight 210, and the frame is a good bit sturdier. It doesn’t seem quite as fast as any of our Shuriken X1 drones, but they each have $100 worth of T-Motor motors—we’d have all been surprised if the Fire Dancer could match an X1!

I didn’t keep all that many parts from my Shuriken X1. Just the motors, ESCs, and the XT60 cable. These are the parts that went into my Shuriken X1 rebuild. 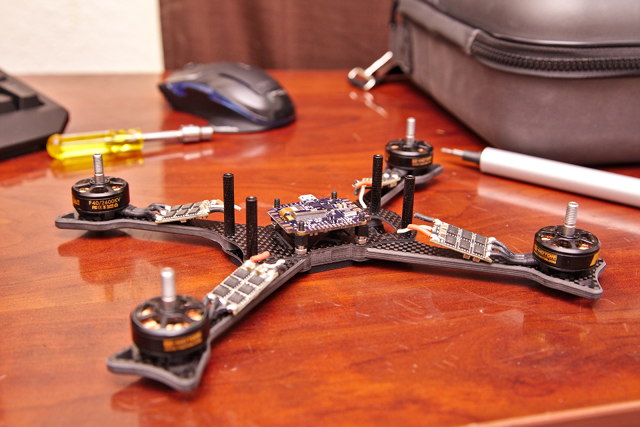 I’ve only had it out one day so far. I was in a hurry to get it up and running, and the only spare camera I had was my Runcam Micro Sparrow. I wanted to move the Eagle from my BFight 228, but for all I knew, this new quad wouldn’t fly right. We were meeting to fly in less than 12 hours, and I wanted to make sure I had a good, working quad to fly!

I managed to let the smoke out of one of the Shuriken X1’s ESCs. I used one of the 30a ESCs from my old Shuriken 180 Pro. It is physically smaller than the other ESCs, and I’m more than a little worried that it’s limiting the power of my quad. I’ll have to experiment to find out! 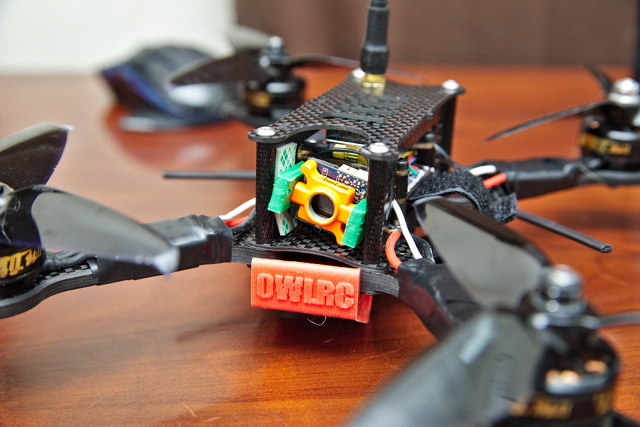 I ended up smashing that poor Runcam Sparrow. I was power looping drone gates, and I ran into the side of a gate at high speed. My video immediately turned white.

I cracked the Runcam Micro’s plastic casing, and the lens was nowhere to be found. I also caused the gate to fly apart, and I pulled one of its stakes out of the ground. Judging by the sounds of the small audience we had in attendance, it must have been quite glorious!

My friend Brian Beverage got some great video of the crash, too!

Impressions of the OWLRC Dragon frame

Both of my drones are flying great with the Dragon frame. I’m using Betaflight’s new dynamic filter, and I am able to turn off both gyro notch filters without any ill effects.

I haven’t done any PID tuning yet. The stock Betaflight PIDs are flying all right. My snap rolls are making me believe my roll terms aren’t far off. Snap flips on the pitch axis feel a little off—I assume the stretch-x frame has a lot of leverage on the pitch axis.

It has been a way too windy for PID tuning this week, and I’m not yet running my favorite props anyway. The BFight 210 came with two sets of Gemfan 5152 props. I’ve been wanting to try them out, and my current stock of my favorite props are all pink. The black and clear Gemfan props were more photogenic!

I’ll have my pink Racekraft 5046TCS props on both quads next time I go flying. With any luck, there will be less wind, too!

Just like the BFight 210 frame, the OWLRC Dragon doesn’t provide much protection for your camera. It would be nice if the standoffs extended forward a bit more, but it isn’t a deal-breaker for me.

I wouldn’t mind having more room inside the frame. I have a lot of empty space behind my flight controller, but there’s only just barely enough room for the camera up front. I wouldn’t complain if the central pod was moved forward a bit. That’d open up some space in front and allow for more protection of the camera. 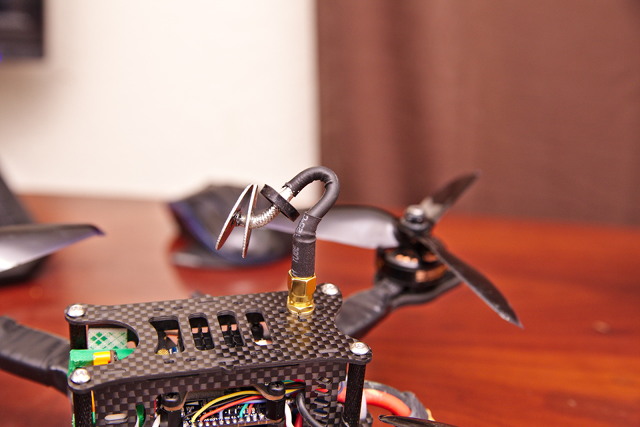 The tolerances are tight. I have two frames here, and each frame has two side panels. The tabs on one of those four panels didn’t want to fit into the top and bottom plates. The other three are quite snug, but they fit fine.

After finally getting it into place, and reassembling my drone a couple of times, that tight plate isn’t a problem.

I don’t think you should. I think it is a great excuse to upgrade your frame. I’m happy with my choice of the OWLRC Dragon frame, but there are other good choices.

Brian’s Furibee Fire Dancer uses a clone of the TransTEC Lightning frame. It looks like a great frame for less than $70. It is 10 or 12 grams lighter than the Dragon, but it feels quite sturdy to me!

It showed up too late for me, but KababFPV’s new Hyperlite Flowride looks like a great frame, and it is only $45. It weighs about the same as the Dragon, and it looks just as sturdy. I like the Flowride’s camera position. The camera and stack housing is shorter and narrower. I think that’s the way to go, but it will only fit micro size cameras. I’m not ready to give up my Runcam Eagle 2!