Earlier today, I was walking out into the middle of a big, empty field with my friend Brian. We were on our way to collect my Shuriken X1. I had to disarm in the middle of my flight. Our friend Alex was flying his DJI Spark drone, and the Spark signal always interferes with our 5.8 GHz FPV equipment. The static wasn’t too bad right up until that sudden moment when I could barely see where I was flying—the safest thing to do was disarm. 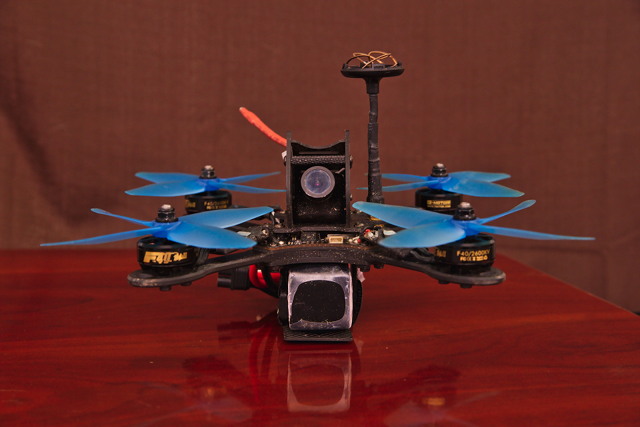 We got to the X1, and there wasn’t any damage at all, and that’s precisely what we expected. The only surprise was that the props were all still straight! I’m a huge fan of the Racekraft 5040 props—they fly great, and they’re tough to break!

On the walk back to our seats, Brian and I were talking about how often we crash our Shuriken X1 drones. I’ve run into trees, dropped into the grass from 200 feet in the air, and I’ve crashed hard into pavement on more than one occasion. Just a few days ago, I punched the throttle at the wrong point in an attempted power loop and ended up accelerating straight into the ground.

I was telling Brian that I needed to write about how durable this drone is, because I’m always so confident that it will survive a crash.

We must have jinxed it!

I plugged my battery back in, sat down, and proceeded to fly the remainder of that battery. Shortly into the flight, I attempted to pull an s-turn over a rather small tree. I did a terrible job.

I made it over the tree, but I didn’t manage to fit well under the tree. I smashed into the concrete next to the tree quite hard. The only damage I saw was the deformed battery. 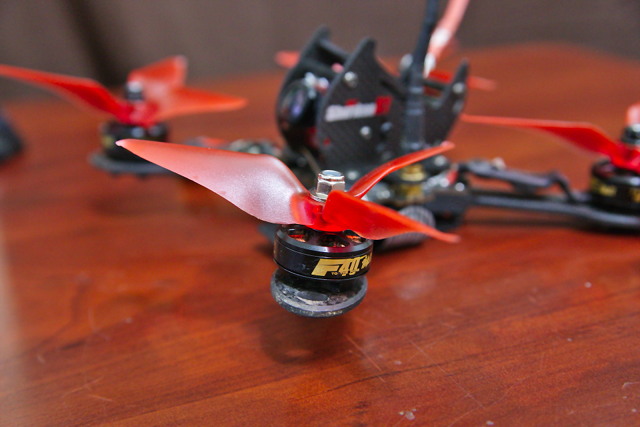 I took the drone back to my seat, and I was spinning the props to check if they were bent. One of the props felt loose. Then I thought the motor was loose.

Nope. The arm was broken! This is the first time I’ve broken anything more than a propeller on my Shuriken X1!

Arms for the Shuriken X1 are cheap!

I ordered a pair of arms from Gearbest for $16. That’s a lot less than I expected to have to pay, and the arms are really easy to replace. I was able to borrow an arm from a friend and replace it in the field. Three screws hold the arm to the frame and four screws keep the motor in place. It was easily a ten-minute repair.

The Shuriken X1 has been amazing

The Shuriken X1 is fast, and it handles great. It has always been there when I needed it, even though I’ve been so tough on it.

It has so much more power than I need. Often-times there are other people at the field already flying. I can put my goggles on, do a quick punch out, and I’ll hear voices saying things like, “Did you see how fast that is?!”

There are a lot of fast racing drones on the market now, but I never run into someone flying a drone that makes my Shuriken X1 look slow.

That YouTube video is pretty tame. I’ve been running goggles that don’t have a DVR lately, so I haven’t been capturing much footage. That was recorded using Brian’s Fat Shark goggles and I was using my Runcam Eagle 2. It was getting quite dark out, and the sun was already below the horizon.

I was practicing power loops. I never get them right. I usually end up in outer space or I don’t end up hardly going backwards all. I do crash at the end of the video. I accidentally punched the throttle while the Shuriken X1 was still upside down, and I hit the ground hard. I bent two of the Racekraft 5051 props I was testing, but I was able to fix them!

Some newer drones are tempting

My friend David recently started flying an Armattan Chameleon. It is a beautiful piece of hardware, and it looks and sounds so smooth when it is flying. If I didn’t already have a Shuriken X1 strapped to my bag, I’d already be shopping for a drone like the Chameleon.

I regularly check out Gearbest to see if any new drones have landed in their store. There are two that I find interesting.

The BFight 210 looks like an awesome 5” racing drone if you’re on a limited budget. I don’t recognize the manufacturer of its 2205 motors, and I doubt they produce as much power as the 2305 Tmotor F40 motors on my X1, but that might not matter. According to the specs, the BFight 210 weighs about 100 grams less than my X1—it is probably a screamer!

UPDATE: Gearbest sent me a BFight 210 racing quad to test out. I have to say that I’m quite pleased with it. It feels much lighter in the air than the Shuriken X1—very floaty! The first few times I attempted an s-turn over a tree with the BFight 210, I was surprised by just how long it took to fall far enough to fit under the tree. It is a lot of fun to fly and well worth the price.

You should check out my review of BFight 210 FPV racing drone.

The ASUAV F200 looks even more impressive than the BFight 210. It costs $60 or $70 more and doesn’t come with a receiver, but it uses the same motors as my Shuriken X1. The ASUAV F200 also manages to weigh in at about 100 grams less than my X1. This thing has to feel ridiculously fast!

I am not a racer

We set up drone gates on occasion, but I am certainly not flying to become a drone racer. I’ve been practicing stunts and proximity flying, so I’m probably more of a freestyle pilot.

It seems that most freestyle pilots prefer drones with a little more weight. Heavier quads tend to be smoother, and they’re more likely to survive a crash. I know I crash a lot.

I’m certain it would be fun to fly the ASUAV F200 or the BFight 210, but I bet they don’t feel as nice in the air as my Shuriken X1, and I’m certain that the Armattan Chameleon feels even better.

Would I still buy the Shuriken X1?

Absolutely. If my Shuriken X1 fell out of the sky and landed in a lake, I’d head straight home and order another one. 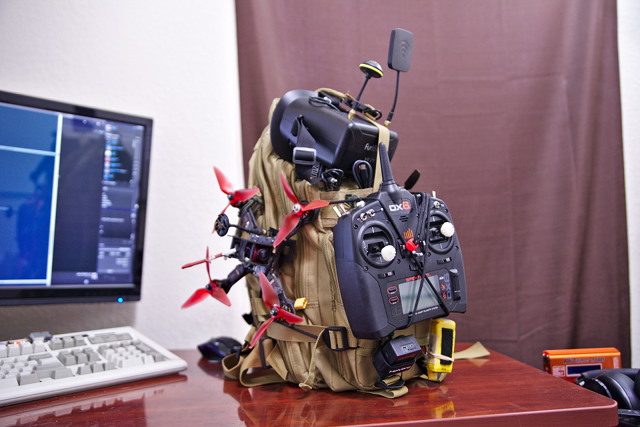 It has served me amazingly well so far. It is fast. Really fast. Probably too fast. It is also extremely durable. It took a lot of crashes into trees, asphalt, and concrete to finally crack on me.

I’ve been working on an upgrade for my PH145. The PH145 is a little heavy for 3” propellers, but it was a fantastic machine to aid me in my quest to learn how to fly FPV. My plan was to buy an inexpensive carbon fiber frame with enough room for 4” propellers. I thought it would be nice if I could rebuild the first quadcopter I designed using almost all the original parts. 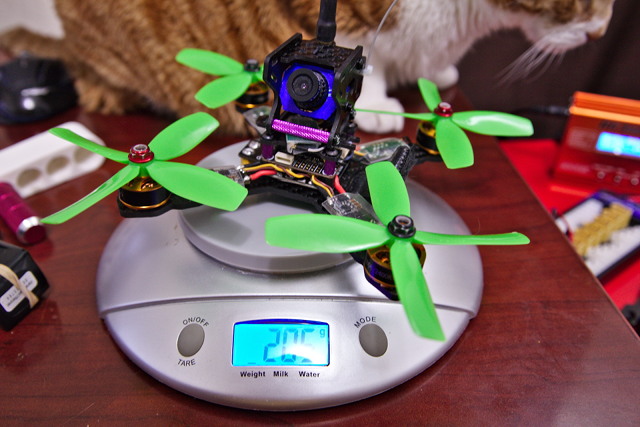 It didn’t work out that way. The pin headers on the old NAZE32 were long and in the way, so I replaced the flight controller. I thought I burned out an ESC, so I replaced the 30 amp 4-in-1 ESC board with a set of 20 amp ESCs. That’s when I learned that I didn’t burn out an ESC—I smoked a motor!

So I upgraded to 1806 motors. The only parts left from the PH145 are six aluminum screws, the camera, VTX, and the battery strap. It did inherit the DSMX receiver from my Shuriken 180 Pro, though.

I wanted to keep as much of my first FPV drone in the air as I could, and I did a bad job of it. It is finally assembled, and it is ready for tuning and testing. I’ll let you know how it works out!

Do you have a Shuriken X1 or a similar racing drone? Do you have a Chameleon, BFight 210, or ASUAV F200? Leave a comment and let me know what you think. I’d love to hear about your drone!