UPDATE 2: Everything in this post is still relevant, but Emax is now selling the TinyHawk II in a Ready-To-Fly bundle. There are a lot of little improvements in the TinyHawk II, but the ones I’m most excited about are the much nicer camera and more powerful video transmitter. You should check out Jeremy Cook’s write up of his experiences with the TinyHawk II over at Butter, What?!

I’ve had my EMAX TinyHawk for quite a few months now, and I just realized that I haven’t actually sat down to write about it yet!

I’m excited about brushless Whoops, and there are a lot to choose from now like the Mobula 7, the Eachine Trashcan, or the EMAX TinyHawk. What is a Tiny Whoop? Why would you want a brushless Whoop? Why did I choose the TinyHawk?

The real Tiny Whoop is a ducted, brushed micro FPV drone, and it excels at indoor flying. There are other brushed Whoop clones, like the NewBeeDrone AcroBee, or cheaper, less capable clones like my Eachine QX65. 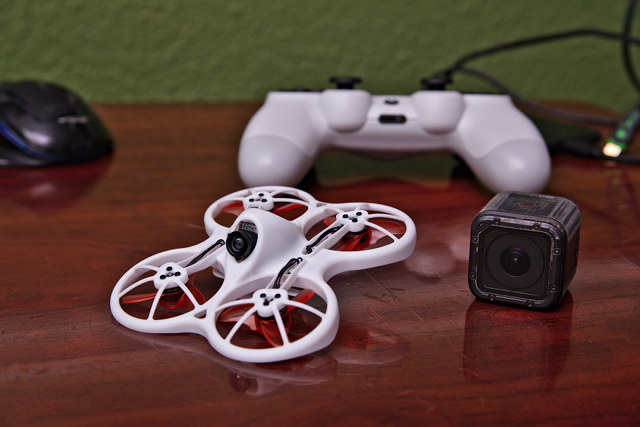 There are two things I dislike about these brushed Whoops. Brushed motors have a limited lifespan. They may only last about four hours or so. These quads are also rather fragile. They don’t get into too much trouble, because they weigh less than 25 grams, but I’ve broken a few Whoop frames.

Brushless motors won’t wear out. You might step on one and break it, but you’re not going to smash one of these in a crash like we can with our heavy 5” quads. This makes the brushless Whoops more durable, and reduces the time you have to spend maintaining them.

So why did I choose the TinyHawk? The Mobula 7 and Trashcan can run on 2S batteries, so they can generate a lot more thrust than the 1S power of the TinyHawk. Doesn’t that make the TinyHawk a terrible choice?

The Emax Tinyhawk seems like it will be plenty fast enough for indoor flying. It doesn't have GPS on it, so I can't tell how fast it is going. And GPS doesn't work in the house. I only know it can go 0 to Wall in about a second and a half! pic.twitter.com/0V8lsbBqh7

I’m not a professional Whoop-class racing pilot. I’m not even an amateur. I just want a fun toy to fly indoors, and I want it to always be ready to fly.

The TinyHawk is overbuilt, and probably a bit overweight. Its shell is sturdy. The props are thick and tough. As long as nobody steps on it, and no dogs decide to grab it out of the air, I expect my TinyHawk frame to last. I wouldn’t be surprised if I have put more than 100 batteries through my TinyHawk, and it looks just like it did when I opened the box.

At the time that I bought my TinyHawk, people were regularly breaking their Mobula 7 frames. I hear that HappyModel has improved the Mobula 7’s frame since then, but I still feel that the TinyHawk has a leg up here.

FPV looks like fun! Should I start with a TinyHawk?

I believe the EMAX TinyHawk bundle is the best way to get started FPV, especially if you’re on a budget. The TinyHawk bundle plus a six-pack of additional batteries will cost you less than $200. You’ll have an indoor FPV drone, a controller, an FPV headset, and enough batteries to fly for nearly 30 minutes.

I think the bundle is a steal, and it is possible to set it up to use the bundled controller to practice in a simulator. Everyone flying a 5” FPV freestyle or racing quad needs to learn to fly in the simulator.

If you have a TinyHawk or any other brushless Whoop, you need to check out Project Mockingbird. They have documentation for tweaking Betaflight to make your brushless Whoop fly better—much better!

I tried their Betaflight brushed Whoop settings on my Eachine QX65 last year, and the difference was like night and day. It made the QX65 more responsive, and it had a lot less trouble with propwash when descending from the second floor of the house.

Can I fly the TinyHawk outside?

You can, but only in the same way that you can drive a go-cart on a Nascar track. The TinyHawk is extremely fast in the enclosed space of your house, but a small park will feel huge, and it will take forever to fly from one side of the park to the other.

I didn't buy the Tinyhawk for outdoor flying. It doesn't have the power-to-weight ratio for the kind of flying I do. But a lot of people seem to fly these outside, so I figured I'd give it a try. Near the end of the battery, the poor guy struggled to make it over the tall trees! pic.twitter.com/wWhXflg3SQ

Wind will also be a problem. A light breeze will just make it difficult to aim your TinyHawk through gaps. On a properly windy day, your TinyHawk may not be able to fly faster than the wind, and it might get carried away!

If this is your first experience with FPV, you’ll have some fun outside with your TinyHawk. Just be careful not to lose it!

The 6-port USB charger than comes with the TinyHawk works, but it is extremely slow. I’m using the charger than came with my Eachine QX65. Similar 1S chargers are available on Amazon. At 600 ma per port, it is probably twice as fast as the TinyHawk’s USB charger, but it requires a DC input—I use my big 6S field charging LiPo. 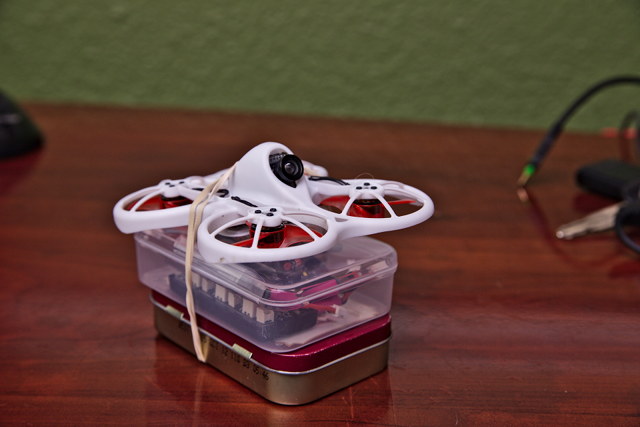 My friend Brian uses the CX610 charger. It has 6 ports, and each port charges at 1 amp. That’s nearly a 2C charge rate for our 450 mAh TinyHawk batteries, and it charges nearly twice as fast as my charger, but it also requires a DC power supply or a big LiPo battery as an input. These were hard to find when Brian ordered his—I think he ordered the last one available at Amazon that day! They seem to be more common now.

With the CX610 and six or eight batteries, you can probably manage to fly continuously for more than an hour. Don’t buy my charger. Get the CX610. It is about the same price, and a much nicer piece of hardware!

A drone for every occasion

I have two or three 5” freestyle quads. They’re big, heavy for their size, and they capture awesome video footage. You’d never fly one of these indoors, and they’re not appropriate in every situation outdoors. Sometimes the space is too confined. Sometimes it’d be too risky to fly something so heavy and capable of causing so much damage to people and property.

I also carry a 3” freestyle quad. It is built with a tiny HD video camera on a vibration-absorbing Kestrel frame, and it weighs just over 220 grams. The entire build costs less than [the GoPro][gp] I send up on my 5” quads. It would be difficult to break a window with this little guy, but it would still cut someone up pretty badly if it hits them. It would also be much less upsetting if I lost this quad in a lake or river.

I rode my e-bike to a playground near my house. That seemed like a better place to do some proximity acro flying the Tinyhawk. pic.twitter.com/TMm4yBpA0q

Then I have my TinyHawk. I’m not going to capture any amazing video footage with this thing, but it is extremely safe. I’ve flown it right into my face, and it didn’t do any damage. We fly them in the house around our pets and children all the time.

I bought the TinyHawk bundle. Where do I go next?

When I wrote this blog back in April, the upgrade path from the TinyHawk ready-to-fly bundle wasn’t exactly clear. The goggles will get the job done whether you want to fly whoops, 2.5” or 3” micros, or even 5” racing or freestyle miniquads.

I learned recently that the radio transmitter that comes with the kit should be compatible with most FrSky D8 receivers. These are the older receivers, but D8-compatible receivers ship with many of the less expensive Bind-N-Fly drones. As long as you avoid drones with genuine FrSky XM+ or R-XSR recievers, you should be able to fly a lot of off the shelf drones with your EMAX radio.

Your flying experience won’t be as good as with a Taranis—the gimbals on the EMAX radio have a shorter throw, and they aren’t as precise. You will be able to fly.

It isn’t April anymore. It is now August, and EMAX released a new drone: the TinyHawk Freestyle. The Freestyle falls into what people are now calling the Toothpick class. Small, extremely light, relatively safe, and usually quite fast. 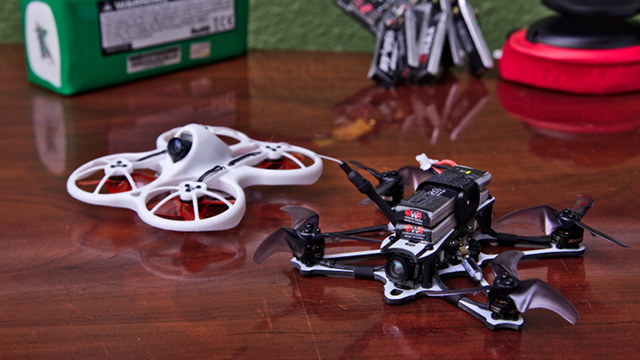 The TinyHawk Freestyle isn’t the smallest, lightest, safest, or fastest toothpick. I think it is pretty close to the sweet spot for most of those measurements, though, and it is the obvious upgrade for someone that outgrows the TinyHawk Ready-To-Fly bundle. The batteries and charger that you use with your TinyHawk will work with the TinyHawk Freestyle. That’s a big win.

I didn’t have goggles. I didn’t have FPV capabilities on that drone. Sure, the Spektrum DX6 is a much higher quality radio, and that goofs up my comparison, but that’s not important. What is important is that you’re going to have so much more fun with your $300 investment than I did.

You’ll have more fun with your $165 investment in the TinyHawk RTF kit.

What about the TinyHawk II?!

I haven’t flown the TinyHawk II, but the specs sure make me think it handle a breeze outside quite a bit better than the original TinyHawk.

I’m a fan of the way the original TinyHawk and the amazing TinyHawk Freestyle can share batteries. The Freestyle has an odd little connector that lets you plug a pair of the TinyHawk’s batteries in, so you can fly your Freestyle with 2S power.

If you think flying FPV looks like fun, you should pick up a TinyHawk bundle. If you’re already flying a larger quad, and you have an FrSky radio and a set of goggles, but you don’t have a brushless Whoop yet, I think you should buy a Tinyhawk.

The TinyHawk strikes a good balance between performance, enjoyment, durability, and cost. Many of the reasons for choosing your 1S or 2S brushless Whoop will be subjective. I’m glad I chose the TinyHawk, and I’d make the same choice today.

What do you think? Do you prefer the Mobula 7 or the Eachine Trashcan? Do you prefer old-school brushed Tiny Whoops? Tell me what you think in the comments, or stop by our Discord server to chat about it!