UPDATE: I’m writing this little addendum at the end of 2019, and everything is so much better for beginners than it was three years ago! You can get all the entry-level gear you need to get up and flying FPV around your house and in the simulator for around $165. That’s less than I spent on just my controller in 2017. If this seems interesting to you, you should check out my post about getting started flying FPV quadcopters.

I might be exaggerating a bit. The first time I got out to a park and recorded some first-person view video was just about a month ago. I’m certain that I put on the goggles before then, but I didn’t have enough room to fly for more than twenty seconds at a time without crashing until I got out to the park.

This is the footage from my final flight on my first real day of FPV flying at Samuell Garland Park in Dallas. The video signal isn’t great in this video—I snapped a leaf off my PH145 drone’s antenna in a rather spectacular crash earlier in the day. Thank goodness the PH145 usually bounces back from a crash!

I managed to make a few laps around that paved circle, but they weren’t fast or smooth. I did manage to successfully land at least once with the goggles on, but not in this video. At least I didn’t crash hard!

How much have I been practicing?

I started this journey slowly. At first, I was only getting out once a week, but that increased to two or three times a week by the end of the month.

I usually get 80% of the way through at least three batteries every time I fly. I often break each battery up into three flights or more—I need the practice landing!

Many of the days I’ve gone out to the park have been windy. That’s just the way it is here in Plano, TX.

Line of sight vs. first-person view

I’ve been practicing line-of-sight flying for a few months. I started out with my Blade Nano QX, and I flew the PH145 quite a bit before ever putting the FPV goggles on. I believe that practice was crucial to my success with FPV, but it was also a difficult transition to make.

When I’m flying line of sight, I tend to keep the quadcopter pointed away from myself. That was just about the full extent of my practice with the yaw controls. I mostly steered the drone with the pitch and roll stick.

You almost always fly forward in FPV. That means you use a lot less pitch and roll for steering, and a whole lot more yaw. This transition was difficult for me. It is easier to fly FPV if you’re always moving forward, and I’m finally getting used to this—I seem to spend a lot of time hovering in place when flying line of sight!

My friend Alex kindly pointed out another important piece of information. When I was flying line of sight, I was exclusively flying in a self-leveling mode—usually Betaflight’s horizon mode. When flying FPV, it is easier to fly in either rate or air mode. Air mode is similar to rate mode, except it will spin the motors up to pitch and roll even when the throttle is off.

I’m much more comfortable flying FPV in air mode. It is a bit like using cruise control. You pitch the quadcopter forward a bit, and you’ll naturally maintain some forward momentum. Then you mostly just have to yaw to steer. You do have to make some adjustments to your roll when you steer, but Betaflight’s FPV camera angle compensation does some of that for me.

From simple circles to drone gates

On that first day at Samuell Garland Park, I was so proud of myself for being able to circle around the perimeter of the park a few times. I was even more excited when I could manage to land! This is most of what my practice involved for two weeks.

I also started trying to fly closer to the ground, but it is difficult to gauge just how well you’re controlling your craft when all you have to look at is a big, grassy field. While flying at Oak Point Park, I discovered that there was a tree within range of my PH145’s underpowered 25mw VTX—things are much better since I upgraded to a 200mw VTX!

You’re probably asking yourself why I was surprised to find a tree at a place called Oak Point Park. There are hundreds of trees at Oak Point Park. Most of them are quite close together. This is a lone tree not far from the parking lot, and it is well groomed and easy to fly under.

That’s some video of me flying at the park on a windy day. This is about three weeks into my FPV practice.

Circling the tree and flying back towards myself is much more interesting than circling around in the sky while doing the occasional flip. It is a long walk out to that tree when I crash, and using myself as a target isn’t the safest course of action.

I read about people building gates out of things like PVC pipe and pool noodles. I didn’t know if I could fly well enough to make it through a gate, but I knew I could at least use them as checkpoints to race past.

I made eight drone gates—we affectionately refer to them as “drone holes.” We had them out at the park a few days after I discovered the tree. To my surprise, I am often able to fit the PH145 through the holes! The wind was blowing towards the parking lot again, and the wind was strong.

I was told my drone holes are too small!

We met a guy at the park that day who is involved with the local drone-racing group. My drone gates are about three feet across and maybe three feet high. He says these are too difficult, and that their group uses drone gates with a five-foot diameter.

I’m lazy. I want our drone holes to be light and easy to haul around. I’m enjoying trying to hit the smaller gates. I’m hopeful that practicing on the small gates will make the big ones easier to hit!

My friends at Gearbest were nice enough to send me a racing drone to test. I chose the Shuriken 180 Pro, because the price is comparable to my DIY PH145 drone—the Shuriken is probably a little cheaper! Not only is it cheaper, but it arrives at your door fully assembled and ready to go.

I simply can’t handle it as well as the PH145. That’s partly due to the extra thrust, but also because I just don’t fly it as often. I’m not likely to hit any gates with the Holybro Shuriken—yet! I’m sure I’ll be graduating to the faster speeds soon enough.

I may not be able to hit drone gates yet, but I can sure rip around in the air with the Shuriken 180 Pro! I’ve been trying to fly it with the camera tilted all the way up to 45 degrees. This makes it scream through the air at high speeds, but I’m not yet skilled enough to slow down. When you tilt the drone backwards to air brake, you can’t see the ground anymore, so you can’t tell how fast you’re going!

Trees and other obstacles

Going into my fourth week of FPV practice, I ended up trying something a little different. We went to a different park with more trees, and we only brought one drone gate out to the picnic tables with us. This felt like a totally different experience, and it was a ton of fun. I performed way better than I expected!

Having plenty of objects near the ground makes it easier for you to judge exactly how your quadcopter is moving. When I’m up in the sky, I have a hard time figuring out how fast I’m going, or if I’m drifting a little to the side.

With all those trees, I was expecting I’d be crashing a lot. To my surprise, this wasn’t the case at all! I did bump the drone gate once or twice, and I did miscalculate a turn and bumped into a tree once, but I burned through at least three batteries without any major incidents.

Going back to Samuell Garland Park

There’s probably a bit of hyperbole involved when I talk about “my first month” of FPV flying. I know I made some bumbling test flights at home the day the goggles arrived, but I’m mostly ignoring those extremely short flights. I’m also pretty certain that I got a few decent FPV flights in before my first trip to Samuell Garland Park, but that probably only adds a week to my practice time.

So I’ve probably been practicing for a little more than five weeks. That might be more than a month, but it doesn’t make for a good blog title!

The video I captured at my one-month-anniversary trip to Samuell Garland Park isn’t as impressive my flying through the trees a few days ago, but it provides an excellent picture of just how far I’ve come in my first month.

In the video of my first visit, the most exciting thing I was able to do was circle around the control line ring, and it was anything but a smooth journey. I can now do that much more smoothly and at high throttle. I can also fly close to the ground, pass through 3’ drone gates, weave through trees, and fly through the covered seating areas at the park.

I am delighted with my progress so far! Four or five weeks ago, any flight longer than a minute was slightly stressful and often ended in a crash. Now I can stay in the air until my battery dies, unless I’m trying to pull off something that pushes the limits of my abilities.

That’s the only way to learn, though—pushing your abilities to their limits. There was only so much I could learn high up in the safety of the open sky. I now have the skill and confidence to fly near the ground and around obstacles. I can really see how well I’m doing, and it is easier to tell how controlled my maneuvers are. 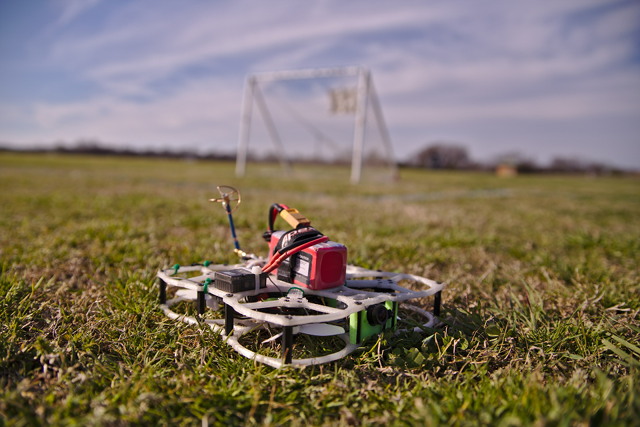 Every day I push myself to go a little faster, and that’s what I’m going to continue to do. My PH145 is a fun, little quadcopter. I’m much less comfortable with the Shuriken 180 Pro. It is a little too powerful for me, but I know I’ll be able to handle it if I just practice a little more. I have a stack of batteries for the Shuriken now, so I plan on practicing more!