I am trying to figure out when I shelved my Baratza Preciso. I suspect that it has been more than a couple of years! It stopped grinding fine enough to pull a slow enough shot of espresso from my Rancilio Silvia, so I started using my wife’s Baratza Encore and ordered some replacement parts. 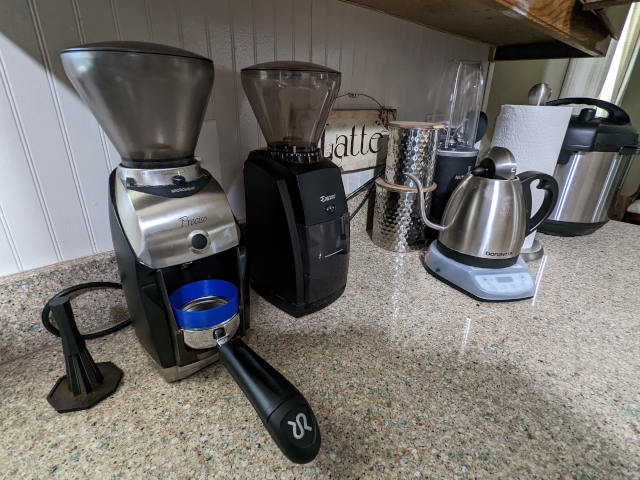 If my memory is correct, I started working on the repairs and then the big plastic drive gear gave up, so I also gave up. I have been limping along making lattes using a grinder that isn’t up to the task ever since. At least until last week!

These words won’t help much if you are shopping for a coffee grinder!

I am quite pleased with how my Baratza Preciso has held up. I have had it for eight years, and I am still using it today. It did need some inexpensive repairs over the years, but it is chugging along.

Baratza no longer makes the Preciso. It has been replaced by one of the grinders in the Baratza Sette lineup, but I am not sure which one.

I can’t speak for the Sette, but I can say that Baratza has amazing support, and they offer so many replacement parts that you could probably assemble an entire grinder from spare parts. If you buy a Sette or an Encore today, I have confidence that you can repair it in 10 years.

tl;dr: The reason I just had to write this!

The Baratza Preciso is SO FAST! It takes the Encore well over a minute to grind 18 grams of coffee for an espresso. The Preciso seems to grind that much in less than twenty seconds. I have watched the Encore with a stopwatch, but I only counted out the Preciso to 15 hippopotamuses, and I tend to count out time a bit more slowly than it actually passes.

I forgot how slowly the Encore grinds. I wrote a blog many years ago about how it takes less than six minutes for me to make a latte. I often head to the kitchen before sitting down at my desk to record a podcast. I look at the clock, and it says I have way more than six minutes available! This should be no problem!

This is most definitely @jimseven's fault. I don't have a #latte art printer, but I do have a #3dprinter and some cocoa powder! This is the weirdest thing I've ever done to my #coffee. pic.twitter.com/DKEzHwBi4Y

Then, by the time I am finished doing my barista duties, I am almost late! Did I time myself incorrectly in 2013? Nope. I just didn’t realize how much time the Encore was adding to my routine.

This might be worth keeping in mind when you’re shopping for a grinder. I make two lattes every day, so I am probably saving three minutes a day. That’s 21 minutes each week, 90 minutes each month, or over 1,000 minutes each year.

I tend to make a latte either right before or in the middle of a task. Today I sat down, created an empty blog from a template, and wrote the opening paragraphs that you just saw. Then I got up, wandered to the kitchen, and made a delicious latte with Yemen Mokha Matari from Sweet Maria’s.

One might consider wasting a few extra minutes taking a break to be valuable. Others might find it more important that they’re saving 21 minutes each week when making coffee for their friends.

The problem with the Baratza Encore

There’s more than one problem. We are just going to ignore that the Encore probably produces an inconsistent grind for espresso. That is for sure a problem, but it is minor compared to the real problem.

What do you do when a shot pulls too slowly on setting 3 and too fast on setting 4? There’s no option in between, so all you can do is adjust the dose. If you adjust the dose, then you also need to adjust the volume of extraction. Adjusting two things at once makes tuning more difficult.

The Baratza Encore’s grind is more of a problem than I thought!

I wrote this entire blog two months ago, but forgot to put the finishing touches on it so I could publish it. Two months of being back to using the Preciso again have shown me another problem with the Encore. The cheaper grinder produces so many more fines!

I try to pop my shower screen off once a month for cleaning. This time the screen didn’t look any worse for the wear. Hardly any coffee grounds are sneaking past the tiny holes in the screen now that I am using the Preciso again. It was always so much dirtier with the Encore.

This surprises me a bit. Both grinders are obviously related, and they use the exact same upper burr. The Encore has a slower, weaker motor, and the lower burr is different.

I assumed the difference in the lower burr would just be the number of blades or how aggressive the angles on those blades might be. This is probably correct, but I didn’t realize that this could make a difference in the quality of the grind!

What happened to Pat’s Baratza Preciso?

You are going to have to forgive me. I don’t even know for sure what the order of problems and solutions has been, but I will do my best to give you a timeline.

I know for sure that I got to a point where I was grinding at the Preciso’s absolute finest setting, and shots were pulling in less than 10 seconds. It was awful!

I ordered replacement parts. I have several of the replacement plastic adjustment doodads and the plastic burr holders on hand now. There’s a tiny screw you can use to fine-tune the adjustment ring. I pushed that fine-tuning screw as far as it could go, and I was still getting 10-second shots of espresso.

At that point, I even tried to cut a shim out of a business card. I put that shim between the burr and the plastic retaining ring in an attempt to get the burrs closer together. I’m pretty sure this helped a bit, an I am almost positive that I brewed espresso for a few months like this. I bet this is what caused me to strip the drive gear and finished completely chewing up the upper burr.

The Baratza grinders have a lot of plastic parts

And I have managed to break every single one of them. This was the second time I’d stripped the drive gear, and I happened to order two the first time it happened. I don’t think I knew this at the time. I just threw my hands up in the air, put the Preciso out in the garage, and limped along with the Encore.

I finally got around to replacing the drive gear in my @Baratza Preciso grinder, but it isn't able to grind fine enough for espresso anymore. Or Encore is grinding fine enough at around 3 to 5, but the shots pull in eight seconds at 1 on the Preciso. pic.twitter.com/59PrFdD8dj

The plastic parts are probably a good thing. The idea is that you’re supposed to blow out a fragile $3 plastic part if there’s ever a rock in your bag of coffee. That’s better than destroying an expensive burr.

With the price of the burrs for the Preciso, it might be better if everything were overbuilt and I had to replace a $16 burr every few years. Your mileage may vary.

I wasn’t sure if I should order the replacement burr

There are two burrs in the Preciso. The upper burr is $16 and is extremely easy to replace. The lower burr is $45, and it looks like it is challenging to get it unscrewed from the drive assembly.

I spent about two hours when I replaced the drive gear. Replacing the gear wasn’t too difficult, but when the machine was still grinding too coarse, I wound up taking it apart two more times to move shims around and try adjusting things.

If I were smart I would have taken this photo with the fresh replacement burrs for comparison. The most important end of these burrs are chopped away! How we got here is too long of a story for a tweet, but we are grinding correctly again today! #coffee pic.twitter.com/Z4zwGvrniF

When that didn’t work out, I had wished I spent those two hours working toward getting our LumenPNP pick-and-place machine up and running. When the pick and place works, we can start selling OoberLights boards. When we sell OoberLights boards, there will be cash flow. I could use that cash flow to buy a grinder upgrade.

I do want a grinder upgrade. I’ve had my eye on the flat-burred Turin DF64 grinder for a while. It would be a really nice upgrade!

I didn’t know if I should repair the Preciso. The burr was about $25 after shipping and tax. That’s 5% of the cost of my next grinder. Not only that, but I suspected I would have to spend an hour taking the Preciso apart again. Maybe it would be better to put that $25 toward the price of a grinder upgrade and not waste an hour of my time getting angry at the old grinder.

I spent the $25. I did take the Preciso apart again to undo my adjustments to make sure the new burrs would never touch each other. It wound up being a good choice.

I am drinking a latte right now. I did not quite hit the right grind today. With 18 grams in with the Preciso set to 4F, my light-roast Yemen gave me 31 grams out in 45 seconds on my Rancilio Silvia.

The important thing to note is that I can still go three entire clicks finer on an extremely light bean. I am calling this a successful repair.

UPDATE: A slightly darker roast Ethiopian coffee was able to completely choke the machine with the grind set to 4F! I had to bump it up to about half-way past the 6 setting to get a good pull. I think this means I have done a good job!

I don’t know if the conclusion is thrilling, but I am excited to have my Baratza Preciso working again, and I am quite happy that I didn’t have to spend $400 or more on a grinder upgrade this year. I expect that I will get at least a few more years of service out of the Preciso before I need to upgrade.

What do you think? Should I have junked the Preciso and splurged on something like a Turin DF64? There’s a good chance that next grinder will outlast me. When I eventually upgrade, will I be kicking myself for not doing it a few years sooner? Will my coffee taste that much better?!