My friends and I avoided field charging for a long time. Why should we charge in the field? Wouldn’t it be easier to just carry more batteries for the quads? We did the math. That would cost a bit more, but it was still a good value for us.

Our flying lives were simpler back then. All our quads ran on 1300 mAh or 1500 mAh 4S packs, so that’s all any of us carried. Then we started adding micro quads to our bags. The micro burshless quads use tiny 2S or 3S packs, our Tiny Whoop clones use 1S LiPos.

Our inexpensive, prebuilt quads like the BFight 210 still use 4S packs, but all our new builds are using 5S or 6S packs.

I started experimenting as soon as I upgraded to an ISDT Q6 Plus charger. I picked up a cigarette lighter adapter, and I was able to easily charge from the tailgate of our miniature SUV.

This has its limitations. My ISDT Q6 maxes out at 14 amps. I do this all the time at home, and I am able to parallel charge six 5S batteries in less than 25 minutes. In the car, this wasn’t possible. When charging at around five amps, the input voltage would drop quite a bit. That was enough to parallel charge two 1500 mAh 4S packs in about 20 minutes.

That’s not fast enough to keep me in the air, but it was cheap, easy, and it would let me fly three or four extra packs on each outing. Also, our newer pilots don’t tend to have enough batteries to keep flying. If you lend out your own batteries, they’re likely to come back broken—it has happened to me twice so far! Charging someone else’s packs is a cheaper option!

Connecting the charger directly to the battery would allow me to push the ISDT charger to its limits, but that requires more effort. We only sit near the car at one park, too, so working on that option didn’t seem like it would provide enough value.

Replacing the car with a giant LiPo battery!

I’ve been on the hunt for a good power source for months. SLA batteries are cheap, but they’re way too heavy to carry around. There are all sorts of battery packs built out of 18650 cells. The most common of those are 42 volt packs for electric scooters. 42 volts puts those outside the input or output range of our ISDT Q6, so they wouldn’t be convenient.

I decided to use a big, heavy LiPo battery. Hobby King has a selection of large LiPos. They have 4S 8,000 mAh packs, 6S 20,000 mAh packs, and a dizzying assortment of sizes in between. As far as I can tell, one of those giant packs is always on sale. When that sale ends, a different size goes on sale.

The day before I decided to pull the trigger, I was looking at a 4S 16,000 mAh that was on sale. By the time I was ready to order, the price had doubled! I poked through their selection, and I found a 6S 10,000 mAh for about $70. That seemed about right, so I ordered one for myself and one for my friend Brian.

You should choose the battery that gets you the most watt-hours per dollar!

My giant LiPo was shipped with an XT90 connector. That is of no use to me, so I just soldered on an XT60 connector in its place.

What do I have to carry in my bag?

Including the battery, I have added nearly three pounds of hardware to my already gigantic ThinkTank backpack.

I haven’t bought a second ISDT charger, but I keep considering it. It is easy enough to pull my home charger off the Bat Safe and throw it in my bag, but I have forgotten to do that on at least one occasion!

How much can you charge in the field?

On each power up, the ISDT charger keeps track of how many watt-hours it has pumped into your batteries. There is some loss when transferring power from the source battery to the destination. When connected to a full 10,000 mAh 6S LiPo, the charger can output 220 watt-hours when discharged to 3.3 volts per cell. How many watt-hours does it take to charge one of my miniquad LiPos?

My big LiPo can recharge 14 4S LiPos, 10 5S LiPos, or more than 40 of my tiny 3S LiPos. Any combination of those LiPos would weigh nearly twice as much as the charging battery!

Why is that? You lose quite a bit of power to heat when charging. Shouldn’t the charging LiPo end up being heavier?

I don’t fly my batteries all the way down to 3.3 volts per cell. If they get below 3.3 volts, they crash to 2.5 volts or twenty seconds and you’ll fall out of the sky. 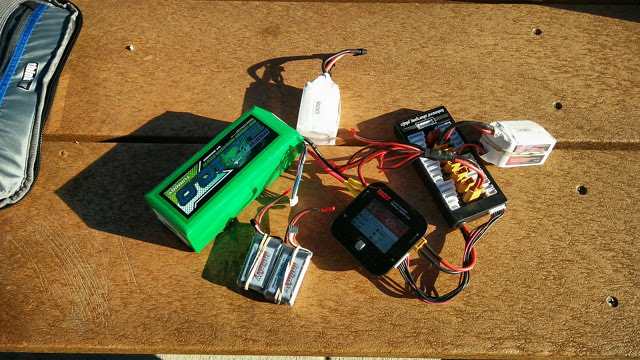 That makes it difficult to fly home. I always stop flying when my goggles show a voltage near 3.6 volts per cell, and the batteries usually settle to around 3.75 volts while they’re waiting to be plugged into the charger. That means the batteries being charged aren’t completely dead—they probably still have 1/3 of their charge remaining.

How many quad batteries would you need to carry?

This has been fun and interesting to think about. What is the minimum number of batteries you can carry and still fly nonstop?

It depends on how long your batteries last, how many amps you’re willing to pump into your LiPos, and your definition of nonstop.

I am comfortable parallel charging four of my 1,300 mAh 5S packs at 14 amps. That works out to a charge rate of about 2.7C and takes about 20 minutes.

When flying freestyle with my GoPro HERO5 Session, my 5S packs last a little over four minutes. If I hustle and use a pretty strict definition for nonstop, it might take me one minute to swap batteries and get back in the air. I never go that fast, though. There’s usually a minute of idle time at the beginning of all my GoPro footage, and the footage doesn’t start until my battery has already been swapped.

Let’s pretend I can go much faster than that.

I’d prefer to charge at 2C, so I’m already pushing things. That means I’ll need to carry at least eight batteries. I’d fly four batteries, then put them on the charger. By the time I fly the next four packs, the first four would be ready to fly. If I repeat that until the big LiPo is discharged, I would be able to fly a total of 18 packs. That’s 72 minutes of actual flight time.

To maintain that pace, I would need to hire a caddy to do my charging for me. Maybe they could swap batteries for me, too!

This isn’t how I spend my time flying, and seems like an unrealistic and extreme situation. I would never have the goggles on for 72 minutes straight. I take breaks. I watch my friends fly. I check Twitter. I go find my quad when it crashes—it crashes a lot! I help friends find their quads. I keep an eye out for pedestrians when my friends are flying.

This charging scenario might be realistic for somebody, but not anyone I know!

How many quad batteries do I actually carry?

I try to carry six batteries of each type. If I drop below six, I buy enough replacements to get up to seven or eight packs—I will certainly break more batteries!

I started field charging at the same time that I removed my final 4S quad from my bag—I really do miss my BFight 210, but I don’t miss the extra weight of those 4S packs! I was carrying more than six 4S packs. My 10,000 mAh field-charging pack weighs less than the 4S packs I removed from my bag, so I’m at a weigh savings overall.

I try to carry six of each size battery, because that’s how many ports my parallel charging boards have available. I have slots set up in my ThinkTank Helipak bag to fit two rows of three LiPos.

I don’t have a strict charging regimen. I’ll tell you about how things went yesterday at the park. I flew three 5S packs. I was mostly cruising around and talking to my friend Brian—I fly much slower when I’m talking. I was seeing flight times way up around six minutes.

I popped those on the charger at a little over 2C. The shade had moved, so we migrated our chairs back into the shade. I poured some water from my giant 2-liter Thermos, watched Brian fly, and I loaded a battery into my Leader 120 micro quad.

I’m nervous about flying freestyle around trees with the Leader 120. I don’t want to get stuck in a tree. I won’t be able to see it, and I don’t want to waste an hour trying to get it down. This fear usually leads to flight times of five or six minutes.

The three 5S packs were done charging before I finished two packs on the Leader 120.

What about sharing the charger?

If you and your friends are all flying similar batteries, this would be fantastic. My ISDT charger has no trouble topping off six batteries in less than 25 minutes.

Unfortunately, my friends and I are all running batteries with different voltages. I run 5S, my friend Brian runs mostly 6S, and our other friends all run 4S. We have to use separate chargers or take turns. Usually it ends up being a little of both!

Field charging is legit. At the pace I tend to go through batteries, my field charging setup has no trouble keeping up with me. I carry enough 5S packs to keep me in the air for 20 to 25 minutes—even longer since I started flying with 5.5” props! If I need to fly longer, it is easy enough to throw some of those packs on the charger—the 10,000 mAh 6S has enough juice to give me another 35 to 40 minutes of flying time.

In terms of cash and weight, field charging is an excellent value. Ten more 5S packs would cost at least $250 and weigh roughly 4.5 pounds. The giant 10,000 mAh only cost me $75 and weighs about 2.5 pounds. The charger and balance board only weigh a few ounces, and I’m just unplugging my home charger and taking it with me. 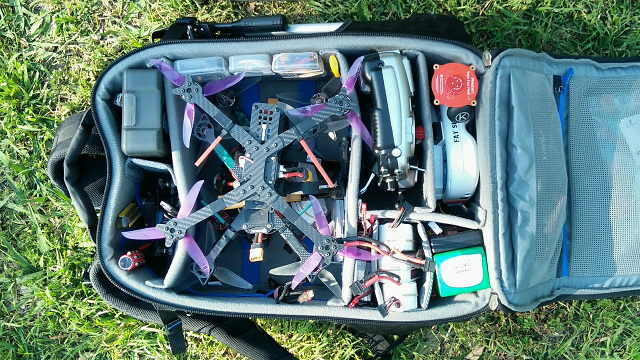 It doesn’t matter whether I carry 6 or 16 packs with me to the field. I have to charge every pack that I fly. Field charging moves the labor from home to the field. I find this to be a good trade-off, because I’m usually chatting with my friends in the field when I’m charging!

I’m still most excited by the versatility. Did it end up being a day for micro quads? No problem, I can charge those batteries all day long. No matter what type of battery you wind up depleting on a particular day, you can always top them back off and fly some more!

Are you field charging your LiPo packs? Are you using a big LiPo, or are you using something else to power your charger? Let us know what you think in the comments, or join us in the #drone channel on our Discord server!