I feels like I’ve been flying the Leader 120 for a long, long time. I checked the date on the first blog post I wrote about the Leader, and it was dated February 22. That didn’t seem right, so I checked my order history. I ordered my Leader 120 on December 20. I ordered one for my nephew on January 5—about the same day mine arrived.

I have two reasons for writing a follow-up post today.

It looks like I’m about to reach my four month anniversary with this little guy. That’s a reasonable amount of time to let you know how durable the Leader 120 has been.

What was wrong with my Leader 120?

The battery that I thought was my final battery was epic. It was the best flight I’ve ever had on my Leader 120. I was power looping multiple trees at the same time, then immediately lining up a few gaps, and then lining up passes through The Lady Tree. It was awesome! I usually have to cut out the boring parts of these videos, but this was three continuous, interesting minutes of flight!

This is the smoothest I’ve ever gotten the Leader 120. I upgraded from the generic 2.8” props to Gemfan 2540 props. That alone made the Leader smoother and more responsive. I also upgraded to Butterflight, and I messed around with filters until I could disable as many filters as possible. I’ll go over those details later.

What have I broken? The 3D printed camera mount cracked on one side, the VTX often cuts out at full throttle when the battery is full, and I found three nylon screws with their heads popped off.

Be sure to keep an eye on your nylon screws. With these screws broken, the only thing holding my carbon side plates in place was the camera mount. That’s why my camera mount broke!

I should also mention that I bent one of the Leader 120’s arms back in February. Something went wrong at the top of a power loop, and I fell from the sky and landed on a sidewalk. I bent the arm back into place, and it has been flying just fine ever since!

What went wrong at the top of the power loop? I had my minimum motor speed set too low. It shipped with an 8% minimum, and that feels extremely high. If you fly inverted, it seems like the Leader 120 is accelerating towards the ground.

If the minimum throttle is too low, the motors won’t always spin back up in time. I thought I had a good minimum set, but it was too low. That’s why I fell out of the power loop. I currently have my minimum throttle set to 6.5%. It is a lot easier to do inverted moves with this setting, and I haven’t had any flips of death.

How did the repairs go?

I replaced the broken screws and glued the camera mount back together. That’s it. It was easy. It is holding together well, and I expect to get another four months out of the repairs!

The VTX is still acting up. You can see it in the first power loop in the video above. It seems like the VTX is rebooting when I go full throttle. It only happens when the battery is fresh. I don’t have an explanation for that, but I’m going to live with it for now.

What’s this talk about Butterflight?

I started my journey by bumping the PID loop up to 8k/8k. I was impressed that the F3 flight controller in the Leader 120 could manage that. I had to turn off the dynamic filter to free up enough CPU to do that. I thought this would be a good choice, but it wasn’t.

How can I run 8k/8k and the dynamic filter?

The most obvious thing to disable was the accelerometer. That wasn’t enough. Then I thought about dropping from Dshot600 to Dshot300, but I didn’t like the idea of adding to my quad’s latency.

What about Multishot? It is faster than Dshot600, but should require less CPU. In fact, it requires a minuscule amount CPU power. Multishot is so friendly to the CPU that I could probably turn the accelerometer back on. I didn’t, but I could.

The only thing I’m giving up is turtle mode, but I have never successfully turtled the Leader 120. It is always embedded in the grass, and it just can’t get up.

If you switch from Dshot to Multishot, don’t forget to calibrate your ESCs!

Would you still buy the Leader 120?

Absolutely. It is a tremendous value. It is about $90 from Gearbest or $120 from Banggood. It is a great deal at either price.

I spend most of my time flying 5” or 5.5” miniquads, but I bet I fly the Leader 120 at least once a week. Sometimes I’ll just fly one battery. Other times I’ll burn through all six. It depends on my mood and it depends on what’s going on at the location.

If there are lots of random people around, I’m more likely to fly the micro quad. It is less noisy. It won’t scare anyone. It won’t do any serious damage to anyone.

I’d be surprised if I have run fewer than 100 batteries through my Leader 120.

I started flying my Leader 120 with 550 mAh Infinity 2S LiPos. I already had six of them for my KingKong 90GT. The Leader was fun to fly on 2S. It was pretty quick and nimble, but it didn’t really have enough thrust to pull off anything too acrobatic. It was very difficult to manage to pull up at the very last moment. I hit the ground a lot!

I run my batteries down to 3.5 volts per cell, and I usually get five minutes out of a 3S pack. It has tons of power, and it is tons of fun.

I have no idea if I’m doing this correctly. I most definitely have absolutely no idea how to correctly tune the Q and R values—I can say with absolute certainty that plenty of people could tune this better than I can! I just went out to the field, and I tweaked the Q and R values using the Butterflight Lua script until I liked the way my Leader 120 felt.

If my understanding is correct, my Q and R values make no sense with an 8k/8k PID loop, but I have trouble arguing with the results. Here are the relevant parts of my configuration.

As I said, I am running Gemfan 2540 props. My Leader has always been a fun quad, but it has never been this smooth and responsive before!

The price of the Leader 120 seems to be increasing. Four months ago, paying $85 for a Leader 120 seemed like a good risk on an unknown micro quad. I don’t know that I would have bought one for $120 at the time.

Knowing what I know today, though, I believe the Leader 120 is still a good value at $120. It is quick, but not scary. It is reliable. It is a ton of fun to fly. 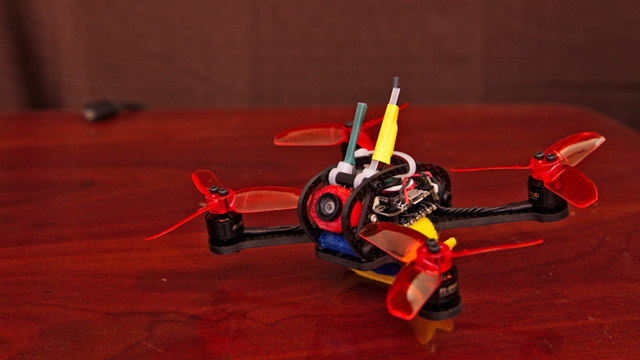 The Leader 120 easily meets all of my minimum requirements for an FPV quad. The flight controller is fast enough for an 8k/8k PID loop, it has the Betaflight OSD, it supports telemetry and the Betaflight/Butterflight Lua script, and it can run Dshot600 or Multishot.

Do you have a Leader 120 or one of its competitors? What do you think of yours? Have you tried Butterflight? Let us know in the comments, or join us on our Discord server!