When I graduated from my bind-n-fly Holybro Shuriken X1 to my first custom 6S-capable 5” freestyle quad, I used Holybro’s stack: a Kakute F4 flight controller, and an AtlAtl VTX. I was using individual ESCs at the time, but I soon upgraded to a Tekko32 4-in-1 ESC, and I’m still using those today.

At the time, I was happy with how my quads flew, but they were far from perfect. I didn’t realize how far from smooth they were at the time, though. I was having trouble with one of my builds, and this fancy new Helio Spring flight controller was just showing up on the market. I figured, why not give it a try? 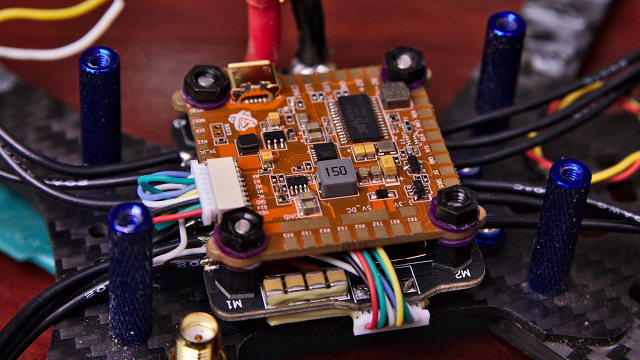 The Helio Spring has a separate F3 chip dedicated to gyro filtering. It has an F4 chip that runs Betaflight, Butterflight, or RaceFlight, but all or most filtering in that firmware is disabled. Until recently, the filtering running on the F3 chip was proprietary.

It was amazing. This was probably around the time when Betaflight 3.4 was released. I’d never flown a quad that felt so locked in and responsive. I remember the big smile I had the first time I came in too tight on a power loop and expected a bunch of propwash oscillation, but there was none. I went home and ordered Helio Spring boards for all my quads.

I'm a dopefish. When I set that up on the asphalt, I planned to crop the #OsmoPocket motionlapse down to a wider, more cinematic aspect ratio! pic.twitter.com/ws4KoYe1rO

Helio and Butterflight have both had issues. Helio seemed to have dropped off the face of the Earth for a while, but then out of nowhere, they released a new IMU-F update. That update was a huge leap forward again, and it breathed new life into my Helio Spring quads.

Helio is dead. Development has stopped. As far as I can tell, my Helio Spring quads will be stuck on Betaflight 3.5 forever. I’ve been running Betaflight 4.0 nightly builds on my 3” and 4” micros, and I like it a lot. How long can I wait before upgrading my 5” freestyle quads?

Waiting for the next big thing

There have been some minor advances since the Helio Spring’s release. Some flight controllers have a relay that cuts power to your VTX for an improved pit mode. I’d like to have that, but I don’t really need it.

Dual gyro sensor fusion looks interesting, and there are a couple of flight controllers that support it. These flight controllers have a pair of identical gyro chips, and one of those chips is rotated 90 degrees. The flight controller takes the average of the output from both gyro sensors. This gives you a reduction in noise with almost zero cost. It doesn’t add any latency at all, and it doesn’t even require a noticeable amount of CPU time!

Not only that, but if one of the gyros fails, you can configure Betaflight to ignore it. That could be handy!

We upgraded one of Brian’s Helio Spring quads last week

My friend, Brian, had a dead Helio Spring that needed replacing. I recommended he try the iFlight SucceX F7 TwinG flight controller. It doesn’t have a pit mode relay switch, but it has a pin for camera control, dual gyro sensor fusion, and an F7 microcontroller. I haven’t even looked into how to make use of the camera control pin! 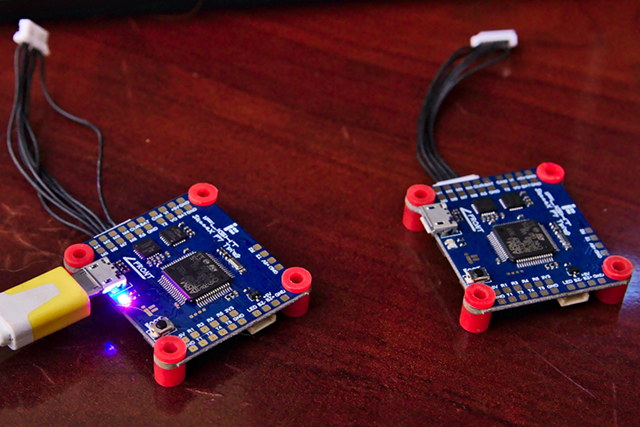 It is a nice board, and the installation was quick and painless. The pinout of the iFlight F7’s ESC connector doesn’t match the Tekko32 4-in-1, but the connectors are compatible. Disassembling and reassembling an 8-pin cable to connect the two boards was probably the most time-consuming part of the transplant, but only because we triple-checked, then rechecked our work. Putting the battery input on the wrong pin would have been bad news!

The iFlight F7 TwinG is a nice-looking board. It has a clean layout. It has plenty of UARTs. What’s not to like?

I couldn’t wait to upgrade mine

I’ve been exclusively flying 3” and 4” Kestrel builds for more than a month. Last weekend, I took out my 5” Flowride quads for the first time in a while. It was fun. Those heavy freestyle builds suit my flying style much better than the 250-gram builds, but I was unhappy with how the 5” quads were flying. I was getting more propwash than I would like, and they felt a little off on quick, sharp movements followed immediately by a quick throttle input.

I didn’t want to put time into looking at the tune on these builds that are stuck on outdated versions of Betaflight, so when I got home, I ordered a pair of iFlight F7 flight controllers!

I made a mistake. I soldered in the first iFlight F7 flight controller, plugged in a 3S battery along with a smoke stopper, and all I got was the ESC startup tone. I didn’t get the tones you would expect to hear after the ESCs communicate with Betaflight.

I fried the flight controller. I checked, rechecked, and then checked a third time when I was correcting the order of the wires in my ESC to FC cable. The only spare 8-pin cables I had on hand that were long enough had all black wires, so I was trying to be careful.

As it turns out, I had the order completely reversed! That’s not the end of the world, though. I still have another iFlight F7 on hand, so I fixed the wire and soldered it in.

It worked great this time, but when I was buttoning up the quad, I noticed on of my rear arms was loose. Several months ago, I slightly bent a bottom plate in a crash. I guess it has been breaking more and more ever since. Of course, that’s the quad I transplanted the new brain into, right?

First flights with a loose arm

I put the FC in Friday evening, and I didn’t notice the arm was loose until after I had the top plate back on. I have a spare bottom plate, but I didn’t have a chance to disassemble it that night. Saturday morning, Brian informs me that we’re going to fly at the golf course, and I don’t have time to charge batteries and swap bottom plates before I have to leave!

It was OK, though. The quad flew amazingly well even with a problematic arm. This shouldn’t surprise me, though. I’ve never noticed a difference in the air between my two Helio Spring quads, although I’m certain I made this one worse by wiggling the arm a bunch when I was testing to see how bad it was!

I didn't get much footage with the 5" yesterday, even thought I was supposed to be testing out the new flight controller. All my footage on the 5" has a big, fat smudge on the glass, too! pic.twitter.com/lC6AxDb2hu

I only got two batteries in. I had changes and repairs to my 3” and 4” Kestrel quads that needed testing, too. I don’t think I could have asked for a better upgrade!

Betaflight 4.0 has made some huge leaps compared to Betaflight 3.5, and that’s what I was stuck with on my Helio Spring quads. Propwash handling is improved. I’m pleased with the overall feel of the quad. Whatever they’re doing with stick input filtering, gyro filtering, and feed forward these days is just awesome.

I’ll have a pair of solid, sturdy Hyperlite Flowride quads with iFlight F7 flight controllers in a few days. If the weather cooperates, I won’t even bring my micros out with me next week. I’ll concentrate on testing and tuning the new flight controllers.

At this point, we’re kind of being forced to migrate away from our Helio Spring boards. You can keep flying them until they die—that was supposed to be my plan! I like to keep my fleet as identical as possible, so once I upgraded one quad, the rest were going to quickly follow.

If you’re upgrading from a Helio Spring, I think the iFlight F7 with its fancy new dual-gyro setup is a good choice. It has plenty of UARTs, the layout of the board is great, and subjectively speaking, it flies great!

Do you think this sort of dual gyro setup is the future? Do you think I should have saved about $5 by using a single-gyro board? Do you prefer a different flight controller? Let me know what you think in the comments, or stop by our Discord server to chat about it!