Early last year, I attempted to build out one of my Kestrel frames with 4” arms, and I did my best to keep the build under 250 grams. Well, maybe not my best. I wanted a 4” freestyle quad that would be legal in most parts of the world, but the 250-gram limitation isn’t a problem where I live, so it was fine if I went over.

I forgot to account for the receiver and its antenna when I did my early weight check. Ended up at 270 grams with a 650 mah and 244 grams with a 450 mAh 4S. The 4" Kestrel survived a quick hover test in the yard, so I'm quite pleased! pic.twitter.com/BlQLFNHq9Q

I don’t own any of these new motors!

I’m going to let other people figure this out. I’m excited that they’re doing such a good job!

KababFPV is blazing a trail here

I’ve been a fan of Bob Roogi’s work for a long time. One of my early miniquads was built on his Floss frame. My first real freestyle quads were built on his Flowride frames. My friend Brian is flying a Toothpick 3 build, and it is an amazing little machine.

Bob’s company is having some really interesting 2203 motors manufactured. It seems the intention here is to have smoother cinewhoop footage. Motors with a 22 mm stator use much bigger bearings than motors with 14 mm or 15 mm stators can support. Bigger bearings tend to be smoother and more durable.

I’m excited because Bob hasn’t stopped there. He’s designed a more robust equivalent to his Toothpick 3 frame for 4” and 5” props, and he’s calling it the Powerpick. This should allow for some insane power-to-weight ratios while keeping the overall weight and cost down.

Bob has also designed a new 4” freestyle frame called the Fouride. This is a bit heavier than the Powerpick. It is designed to be compatible with the DJI digital FPV system.

Bob posted some test footage from a 5” Fouride with FPV Cycle 2203 motors and an 1,100 mAh 3S battery carrying a GoPro Session 5. The whole thing weighed in at 429 grams, and it sure looked like it was flying great. For comparison, my 5” freestyle quads weigh in at about 640 grams with a GoPro Session 5.

There are a lot of new motors available for 4” quads

My other friend Brian has been collecting data and posting pictures of the motors he’s trying in Discord. I asked if I could write a blog post using his data, and he said that would be fine. That’s the inspiration for what you are reading right now!

Young Brian has been comparing the StanFPV 2203 motors from FPV Cycle, BrotherHobby’s VT 2004 motors, and the Emax 1408 motors. He has a nice spreadsheet with weights, stator volumes, and bearing sizes. I added the Emax 1606 motors that I fly to the list.

Young Brian weighed all these motors with the wires cut down quite short, because he is planning on soldering the motors to racewire. I don’t have a spare Emax 1606 handy, and even if I did, I wouldn’t want to cut the motor wires so short! I’m just listing the manufacturer’s weight for the 1606.

The three motors young Brian is working with are the lighter t-mount variants. My 1606 has a heavier M5 prop nut.

What have we learned about motors?

About a month ago, I was chatting with young Brian about motors. We figured out that 1408, 1507, and 1606 motors all have roughly the same stator volume. Tall motors and wide motors have different power bands, but we’re not going to worry about that today. 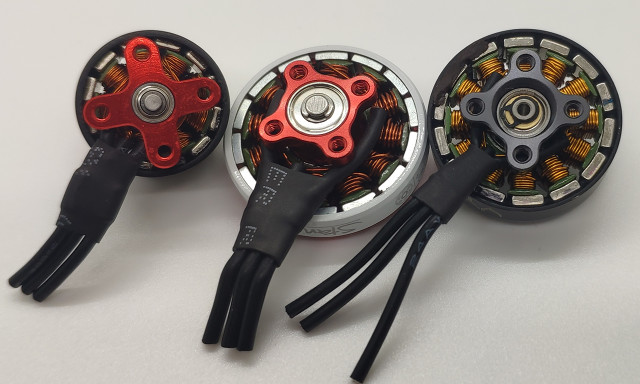 That means that the inexpensive $12.99 Emax 1606 had the biggest bearings in its class, and it isn’t just a little bigger. Its bearings have a slightly larger diameter, but they’re also 50% taller. That’s a huge difference, and there are two bearings in each motor.

Why do I want larger bearings?

You might not want larger bearings. Young Brian wants to build the lightest possible long-range machine that he can. Adding 9.2 grams of weight to his quad to use the StanFPV 2203 motors with their gigantic bearings might not be a good fit for his needs.

I’m betting young Brian will choose the BrotherHobby VY 2004 motors for his build. Those motors should be more powerful than my 1606 motors, they have larger bearings, and they weigh less. Sure, the bearings are smaller than the StanFPV 2203 motors, but they’re still quite large! 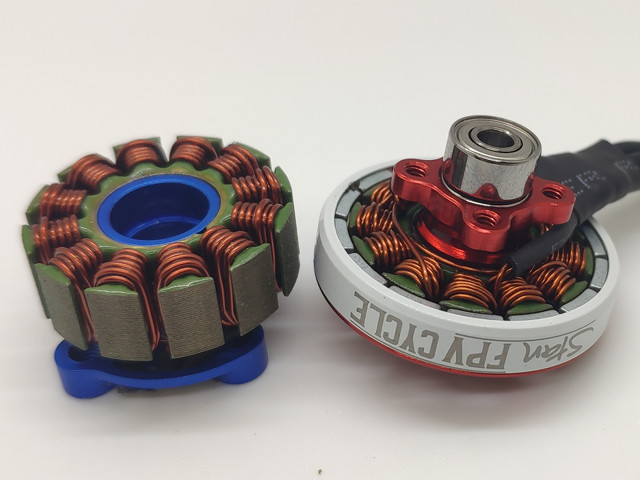 Larger bearings tend to be smoother, and they also tend to be sturdier. Young Brian won’t be smashing his long-range build into concrete three times a day, so he doesn’t have to worry about that. He’s also not carrying a GoPro, so he might not care about getting every extra bit of smoothness that he can muster.

I bet the StanFPV 2203 motors from FPV Cycle are indestructible

Completely indestructible? Of course not! On an appropriate build, though, I expect them to take an absolutely insane beating!

The FPV Cycle 2203 motors use the same Japanese bearings as the 2207 motors I’ve been flying on my 650-gram freestyle quad. Young Brian isn’t expecting to have trouble staying under 250 grams, and I wouldn’t be surprised if you could build an insane Powerpick with 2203 motors and keep it under 200 grams. 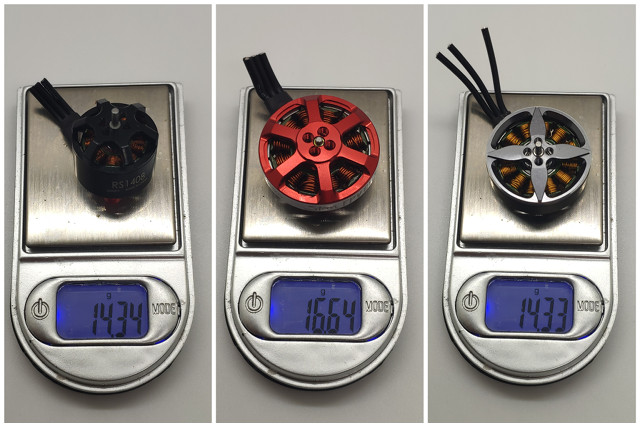 I smash my heavy freestyle rig into concrete all the time. It took me more than a year to wear out any of my bearings. The StanFPV motors have the same pair of bearings and the same style of titanium motor shaft as my Hyperlite 2207 motors. How will they hold up when you smash your 200-gram miniquad into the pavement?

They ought to hold up A LOT better than my motors.

I think a 200-gram machine with these 2203 motors will be nearly indestructible. What about Kabab’s 429-gram build with the GoPro? Will it be indestructible too?

Probably not, but I have a feeling that it will take an order of magnitude more crashes and punishment to break that little guy’s motors.

If shaving 200 to 250 grams off the weight of my freestyle rig means it breaks significantly less often, I would absolutely consider switching to smaller machines like this. As long as I can carry a GoPro, I should be relatively happy.

I’m excited about the future of 4” and light 5” builds. This new hardware is going to allow people like my friend young Brian to build long range miniquads that meet some countries’ 250-gram legal requirements. It might also allow people like me that don’t care about weight to hit an interesting new point on the durability spectrum. Light enough to not break motors and GoPros as easily, while still heavy enough for hucking your quad around for floaty freestyle.

What do you think? Are you flying one of these new motors on a four-inch miniquad? Are you enjoying it? Are you planning on building something like a Fouride or Powerpick? Tell me about it in the comments, or stop by the Butter, What?! Discord server to chat with me about it!