As soon as I finished ordering my KingKong 90GT, I was immediately on the hunt for batteries. The 90GT comes with a single 350 mAh 7.4v Lithium-Polymer battery. I knew that wouldn’t be enough. I like to have half a dozen batteries in my bag for each of my drones.

There are a lot of good deals on batteries in China, but I didn’t want to wait that long, so I was only shopping for batteries at Amazon with Prime shipping.

These batteries showed up a few days before the KingKong 90GT, so I had plenty of time to charge them up. 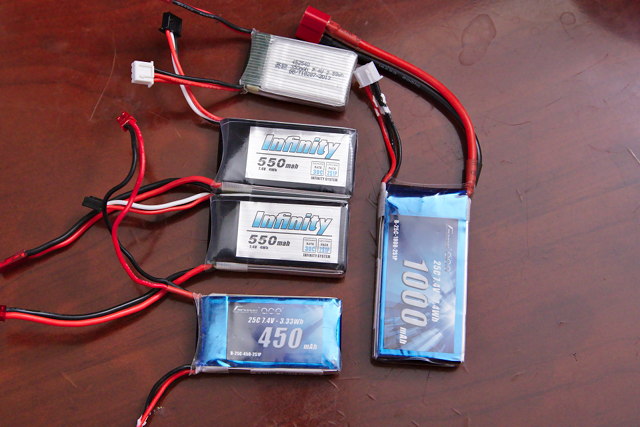 The Gens Ace 1,000 mAh was the best value per mAh at Amazon. I figured it would be too heavy, and it is. The 90GT can barely lift that big, honking battery off the ground. After modding my 90GT to accept 2.4” props in place of the stock 2” props, it can almost fly with the 1,000 mAh battery.

The [350 mAh batteries][hs were my favorite battery from Amazon. They’re cheap, light, and they work well enough. Especially for the price. I have five of them in my drone bag, and I’ve been using them quite a lot. They kept my stock 90GT in the air for 3.5 to 4 minutes. They keep my modded 90GT with its bigger props in the air for 4.5 minutes or so. I’m extremely pleased with the free KingKong 90GT modification that allows for 30 percent larger propellers!

The Gens Ace 450 mAh batteries are superior in almost every way to the generic 350 mAh batteries. They keep the 90GT airborne for an extra minute or so, and the drone feels a bit more acrobatic the entire time it is in the air. Unfortunately, you can nearly buy two 350 mAh for the price of a single 450 mAh. I’d rather spend my money on twice as many batteries than have an extra minute of flight time.

I have quite a few Infinity graphene 1300 mAh and 1500 mAh 4S batteries. They’re awesome batteries, and the prices are great. The only problem is waiting two or three weeks to receive them from Banggood.

I’ve learned how to remove a dead cell from a 4S LiPo battery. It isn’t that difficult, especially if the broken cell is on the outside. This got me wondering if I could convert a 4S graphene battery into a pair of 2S graphene batteries for the KingKong 90GT.

There is an Infinity 550 mAh 4S graphene battery, and I almost bought one.

Then I noticed that Infinity makes a 550 mAh 2S LiPo! It isn’t graphene, but I figured it was worth a try anyway. They’re only about $8 each, so I ordered four of them.

They’re fantastic batteries! My KingKong 90GT with upgraded props has never felt so fast and responsive, and it felt that way right up until the battery went dead.

That’s when I noticed the biggest difference between the awesome Infinity 550 mAh 2S and every other battery I’ve run through the KingKong 90GT. I had accidentally discharged that first battery all the way down to 2.8v per cell!

You might be wondering why I’m so excited about this. With every other battery I’ve tried, the KingKong 90GT falls out of the sky right around 3.7v per cell. It’ll just be flying along, and the flight controller will reboot.

Why can the 90GT drain the Infinity batteries so far?

I am surmising that the thicker wires allow the flight controller to draw enough voltage to stay alive longer.

How much longer do they last on a charge?

I’m not sure yet. On my first day out with the four new batteries, I think I was getting a little over five minutes of flight time on each battery. That’s only about 30 seconds longer than I usually get out of my 350 mAh batteries.

It isn’t a great comparison, though. If I push the 350 mAh batteries hard, they don’t even make it to four minutes. I was definitely flying fast on all the 550 mAh batteries, and they don’t slow down until they’re dead.

When I ran out of 550 mAh batteries, I strapped in the Gens Ace 450 mAh. It was noticeably weaker than the Infinity batteries. I decided to try a few power loops. The first one went great, but nobody saw me do it. That meant I had to do it again!

I was doing these pretty high up. The 90GT doesn’t have nearly as much thrust as my Shuriken X1, and I’m used to the extreme power of the X1. When you’re headed towards the ground in the X1, you just blip the throttle and it recovers from the fall and launches into space.

The KingKong 90GT is a great little micro drone, but it takes a while to recover from a dive compared to the X1. I hit the concrete pretty hard last week when full throttle just wasn’t enough. I figured I’d be safer higher up. 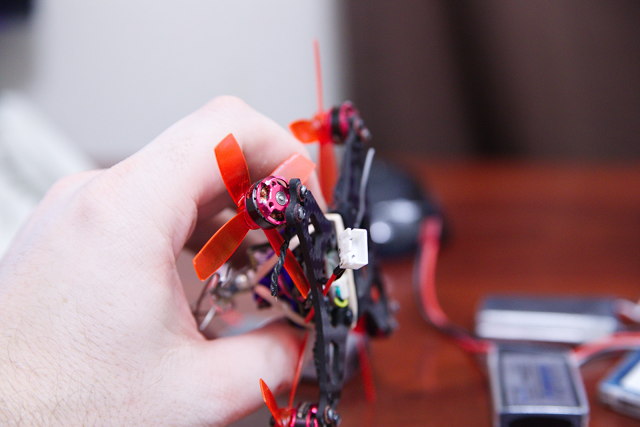 I wasn’t. On my second attempt at a power loop, my flight controller rebooted due to low voltage right near the top of the loop. I feel like I was able to count to 5 before the 90GT hit the pavement.

I bent and destroyed one of the front motors. It’ll be a week or so before I can fix it, so I won’t be collecting much more data until then.

I popped the 450 mAh on my ISDT battery tester when I got home. It was just under 3.8v per cell. I’m guessing that it dipped under 3.7v per cell while I was accelerating into my power loop. The Infinity battery would most definitely have completed that maneuver without any trouble!

I haven’t been able to test this. The biggest battery I’ve successfully flown on the stock 90GT is the Gens Ace 450 mAh. The Infinity 550 does weigh more.

I’m confident that the 550 mAh will fly just with the stock 90GT’s 2” propellers. It will definitely be pushing things to the limit, though.

In fact, these batteries are on the heavy side even with 2.4” or 2.5” propellers on my KingKong 90GT. Blackbox data says my maximum thrust on the Z axis falls around 0.5 g. That’s quite significant on a drone that tops out at about 3.6g under ideal conditions.

I’m definitely trading some performance and efficiency for increased flight time, but I don’t think the punch-out tests tell the whole story. Increasing my all-up weight from 72 grams to 90 grams isn’t idea, but the Infinity 550 mAh sure seems to make up for that in its ability to supply higher voltage for an extended period of time.

You almost have to buy the Infinity 550 mAh batteries from Banggood. There are none available with Prime shipping, and they cost three times as much at Amazon. They’re a great battery, and an amazing value at about $8 each. I don’t think I’d pay $24 or more! 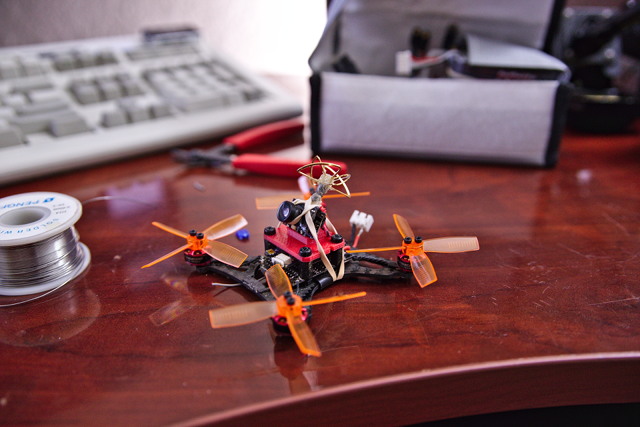 If you’re in a hurry like I was when I first ordered my KingKong 90GT, I’d recommend you get some generic 7.4v LiPo batteries from Amazon. They all seem to work well enough, and they’ll definitely keep you in the air.

If you can plan ahead, though, I highly recommend that you do. The two to three-week shipping time on the Infinity 550 mAh 2S is a bummer, but the results are probably worth the wait!